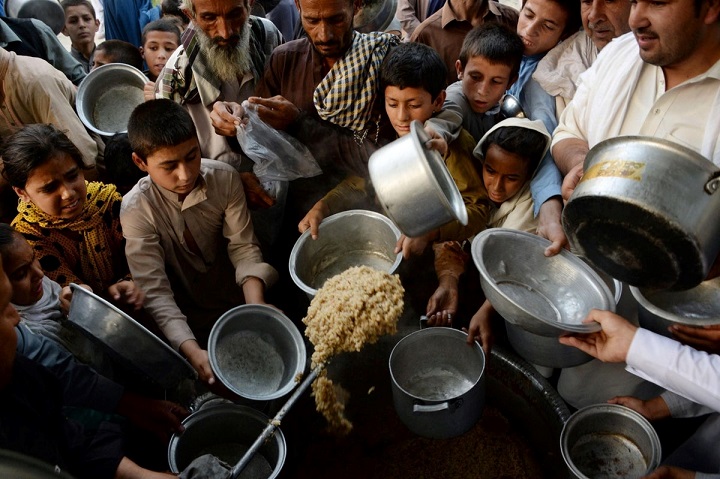 One million Afghan children are at risk of dying from starvation; ten million boys and girls depend on international aid to survive. While the people of the country are suffering from this crisis, the United Nations talks about Taliban and its coming to power and suggests that this crisis is the result of a month after Taliban taking power! In a statement by Anthony Guterres, Commissioner-General of the United Nations, he stated that since the Taliban came to power last month, the general poverty level has soared and basic public services are close to collapsing. This is really shameful! An official with Guterres’ weight should be honest. Was the country relishing in safety and prosperity in the first place before the advent of Taliban?! Are the UN reports and the concern of the international community truly sincere?

Afghanistan has suffered from calamities under the yoke of the American occupation for twenty years. It suffered from killing, destruction of infrastructure, drying up of resources, droughts and poverty, without the United States (which occupied it under the pretext of its development) offering it any help to achieve self-sufficiency or autonomy away from international aid.

The United Nations boasts of its intention to provide millions to satisfy the hunger of the Afghans, in a despicable display of the capitalist civilization. The World Order that killed Muslim youth, violated their sanctities and robbed them of their wealth, today grants them aid, knowing full well that its exit from Afghanistan was after it had fulfilled its mission and exhausted it completely. The US Secretary of State declared that his country left Afghanistan knowing that it is unable to achieve self-sustainability. So why are they highlighting the performance of the Taliban, which is considered a nascent government according to international political norms?! Would the world order have acted with the same tone if the government was in the hands of the pro-Western Afghan forces? We have all seen how the United Nations provides its financial aid to the so-called Third World countries in return for being restricted by toxic political, economic and social agreements that impose the Western system upon them as a way of life. The CEDAW and Beijing agreements were imposed on Muslim countries by force in exchange for financial support.

This is how America leads the world: with a gang mentality, drying up the sources of states’ power, plundering their wealth, and an occupation that exhausts them, then granting them a conditional piecemeal and usurped freedom of power! And then the thief looks at us to give us the crumbs of our looted wealth as aid! What a generous thief! And his generosity is endless, as he does not want to save us from hunger, but rather fights the Islam that we carry, and he wants to give us the lights of Western civilization so that we can become evil like him! Allah (swt), Lord of the worlds, is Truthful in saying:

“They wish you would disbelieve as they disbelieved so you would be alike.” [An-Nisa: 89].

The funds that the United Nations claims to provide to Afghanistan is not pure. We have seen what political money has done in Syria and how it was a tool to end the jihadist movement and kill the sincere ones. Allah (swt) has always warned us against the deception of the disbelievers, and explained to us how:

“If good touches you, it distresses them; but if harm strikes you, they rejoice at it. And if you are patient and fear Allah, their plot will not harm you at all. Indeed, Allah is encompassing of what they do” [Aal-i-Imran: 120].And their way:

“And never will the Jews or the Christians approve of you until you follow their religion. Say, “Indeed, the guidance of Allah is the [only] guidance.” If you were to follow their desires after what has come to you of knowledge, you would have against Allah no protector or helper” [Al-Baqara: 120].

The Prophet (saw) forbade us from following them. He (saw) said:«لَا تَسْتَضِيئُوا بِنَارِ الْمُشْرِكِينَ»“Do not seek light from the fire of the polytheists.”

O people of governance in Afghanistan, you have seen how America and the World Order are the people of treachery, they betrayed the people of Palestine, Syria and Iraq before… Today, they witness the criminality of the Indian regime near you against the Muslims there, and they remain idle. They do not honour agreements or kinships with the believers. Will they take care of you after this? Hatred appears from their mouths and they blame you for a crisis they themselves created decades ago just because you are an Islamic movement.

Do not extend the ropes of affection for the enemy of Allah and your enemy, cut off the road for them, and protect yourselves and your families from a fire whose fuel is people and stones. Surviving from the clutches of hunger, poverty and economic collapse is mentioned in the Book of Allah, which details everything and has a cure for the worlds. The Qur’an is not only a ruqyah book, but with its political, economic and social systems and solutions, it will be able, if you adhere to it well and implement it, to save Afghanistan and all Islamic countries. Survival is only by uniting with your Ummah.

“Indeed this, your religion, is one religion, and I am your Lord, so worship Me” [Al-Anbiya: 92]