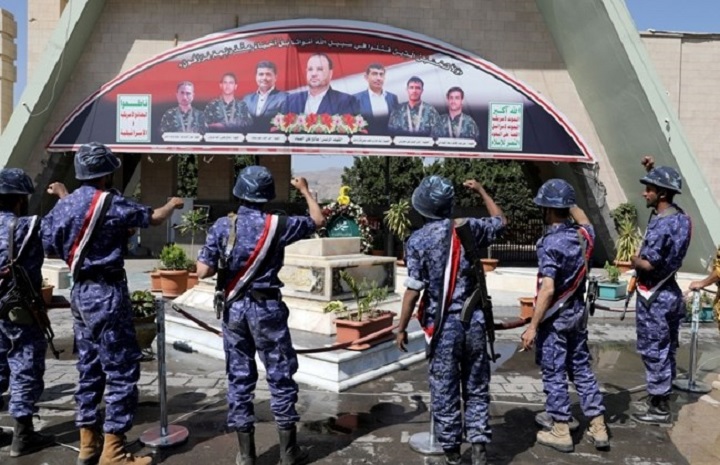 Since 19/4/2021, the Houthis have continued to glorify Saleh Al-Sammad, the head of the Supreme Political Council, who was assassinated on 19/4/2018, so what did this man do?! Did he eliminate the Jews the usurpers of Al-Aqsa Mosque, or did he unify the Muslims under the banner of ruling by Islam and wiped out the borders of Sykes-Picot that divided Muslim countries into statelets that ruling by kuffr? What did Saleh Al-Sammad offer in his life that he deserved all this glorification, to be added as a new idol to the many idols of the Houthis? Saleh al-Sammad participated in the six Saada wars at the beginning of the new millennium, and in the ongoing war since 2014 in which the blood of Muslims was shed on both sides in the service of their enemies, and in implementation of their projects to re-divide their country, and to ensure the continuation of their influence over it, and participated in ruling by other than what Allah has revealed when he was appointed in the Peace and Partnership Agreement as an advisor to Abd-Rabbu Hadi, and then as a partner to the General People’s Congress Party in establishing the Supreme Political Council, and presiding over it since its inception to the day he was killed, and he called for building the modern state that was embodied in the secular civil state, extending his hand to the United Nations and international organizations to come to Yemen, and the World Bank and International Monetary Fund programs in providing usurious loans to Yemen, in order to take a step towards extending its influence over it and colonizing it by modern colonialism through the economy; by providing usurious loans that only their sponsors benefit from in making the ruling regime (that was given theses loans) bankrupt and unable to pay off its assets, let alone its interests. Then, the repayment of the loans provided will be a way for the purchase of economic assets in Yemen through privatization, such as the Electricity and Water Corporation, roads, refineries and oil fields later, as the Bank and the International Monetary Fund did in Latin American countries such as Ecuador, Colombia, Bolivia, Peru and Panama, and their sisters.

No one asked why Saleh al-Sammad was assassinated five months after the assassination of Ali Saleh? Could the killing of Saleh al-Sammad be a response from Britain to America that assassinated its agent Ali Saleh? For four years, you have visited Al-Sammad’s grave in flocks, commemorating the day he was killed, and letting his real killers run freely and merrily!

“Allah being pleased with them and they with him” [Al-Bayyina: 8]

And the Messenger of Allah (saw) singled them out with praise and remembrance, as he said:

And he (saw) promised ten of them, who later were called Al-Mubasharoon (those promised paradise), and among the rightly-guided caliphs after him. The rulers of Yemen, like other Muslim rulers have no value they just roam around, while the wounds of the Islamic Ummah are still open and have not been healed, and they are praised, and noble poems and weaving lies are written about their lives. The Khilafah Rashida (rightly guided Caliphate) state is the hope of the people of Yemen and all Muslims. He (saw) said:

“Then there will be a Khilafah on the method of Prophethood.”