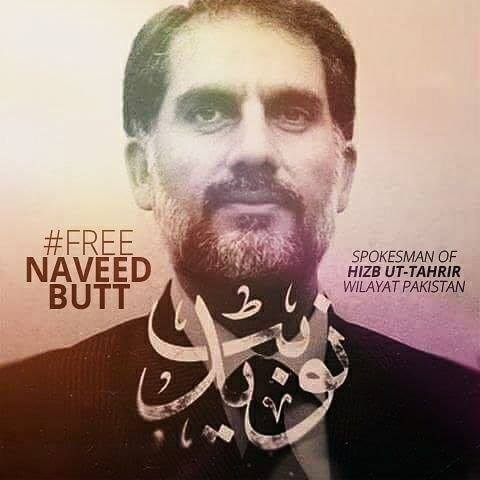 On 11th May, it will be 10 years since Naveed Butt, the Official Spokesman of Hizb ut Tahrir in the Wilayah of Pakistan was abducted and confined in the dungeons of the secret agencies.

“Muhammad is Allah’s Messenger, and those who are with him are firm with the disbelievers and compassionate with one another.” [Al-Fath 48:29].

How the affairs of these American agent rulers are twisted! They are gentle with the enemy kuffar exhibiting love, compassion and kindness for them. Yet, they deal with Muslims with an iron fist, even using the language of fire and bombs. This is despite the Hadith Qudsi, in which RasulAllah (saw) said,

“Allah said, ‘I will declare war against the one who shows hostility to my wali (friend).” (Bukhari).

Fifty-two year old Naveed Butt, father of four, is a loyal and praiseworthy son of the Islamic Ummah. He is an ideological politician of such a class that he can easily fulfill the responsibility of ruling in any post, after the re-establishment of the Khilafah (Caliphate). He is from a noble Kashmiri family residing in Islamabad. He gained admission to the renowned University of Engineering and Technology (UET) Lahore. His brilliance was such that he was transferred to the University of Illinois in the US, where he completed his graduation. He was working in the private sector in the US, when he decided to return to Pakistan to be part of the global struggle for re-establishing the Khilafah upon the method of the Prophethood in the Muslim Lands, willingly leaving behind a luxurious life to face the wrath of tyrants. He tirelessly exposed the treachery of the rulers against Islam and Muslims and their slavery to the US, through writing hundreds of press releases, penning dozens of columns, addressing dozens of press conferences, seminars and conferences, and meeting thousands of influential people, over the course of his struggle. He traveled all over Pakistan to enlighten people about the obligation of re-establishing Khilafah and the details of its structure. During his political and intellectual struggle, he endured repeated arrests and imprisonment and was renowned for his defiance and bravery.

It is clear as day that despite the severe repression of the Pakistani regime, Hizb ut Tahrir has neither abandoned nor slowed in its struggle. Instead, the influence of Hizb ut Tahrir has increased generally in the Muslims and particularly in the armed forces. Indeed, the Muslims regard those who bear difficulties in the cause of Allah (swt) and His Messenger (saw) as being the sincere ones and deserving of leadership. In this blessed month of Ramadhan, we pray to Allah (swt) that, like the Prophet Yousuf (as), He (swt) grants Naveed Butt escape from the dungeons of the tyrant and honors him with ruling by all that Allah (swt) has revealed. Thus,

“And those who have wronged are going to know to what [kind of] return they will be returned.” [Ash-Shu’ara: 227].