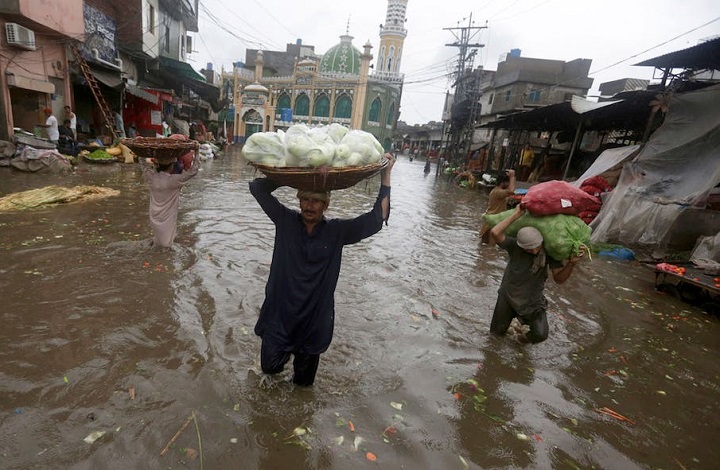 The recent floods in Pakistan have not only wreaked havoc but the scale of the disaster has surpassed the previous floods of 2010 and the earthquake in 2004. Just over a third of the country is under water and more than 33m people are displaced. [CNN] The death toll has already crossed the 1000 mark and the onset of disease, lack of food and fresh water, and inadequate shelter means the final figure will be much higher. The response from the international community has been very poor to say the least, but this has been overshadowed by the domestic blame game between the civil and military leadership for not doing enough to help those most affected.

Comment:
The floods could not come at a worse time for Pakistan. The country was already reeling from an economic crisis fueled by global inflation, high-energy prices, balance of payment deficits and IMF stipulations. Added to this mix, is the poor economic growth posted by the country during the Covid-19 era. However, both Covid-19 and the economic crisis did not destroy Pakistan’s agricultural economy, which is the mainstay of Pakistan’s GDP. The arrival of the present floods has completely devastated vast swathes of crops, which has two major implications.

First, millions of people will not be able to feed themselves and this will place a heavy burden on the federal government. Second, the export staple foods will be severely curtailed and this will affect Pakistan’s ability to earn enough hard currency to pay off the interest on accumulated debt.

To add insult to injury, foreign aid arriving from overseas is not worth writing about. The US has given $30m, which equates to less than $1 for each of the 33m people displaced. Canada has given $5m, and this is less than 20 cents per displaced person. Meanwhile the UK has handed over 800,000 pounds and this is equivalent to 2 pence per person. In comparison, Ukraine with a population of 44m people has received billions of dollars in aid from the West.

Western hypocrisy is not limited to the minuscule aid given to Pakistan. Under the tutelage of the West, the IMF for the past four decades has imposed stern economic conditions that has debilitated Pakistan’s industrial base, eroded its economic sovereignty and increased its foreign debt burden to $132bn. Majority of this debt is owned by the West and their multilateral organizations such as IMF and the WB. If the West was sincere in its intention to assist Pakistan during these testing times, then the very least it could do is to forgive this debt. This would divert billions of dollars earmarked for interest payments to desperately needed funds for the ongoing relief effort.

The civil and military leadership is even more culpable than the West in the situation Pakistan finds itself. Had Pakistan’s leadership adopted a path of economic self-sufficiency and shunned IMF’s structural adjustment programmes (SAP), the country’s economic foundations would have been more resilient in coping with such disasters. Moreover, Pakistan’s leadership has done very little to prepare for an eventuality like the current one. People should have never been allowed to reside near flood prone areas, and greater resources should have been invested in disaster management endeavors. In addition, lessons learned from the previous disasters should have resulted in concrete measures to mitigate such disasters.

Nevertheless, what is most disturbing is the constant wrangling between all the elements of Pakistan’s leadership to take credit for measly flood relief efforts at the expense of really helping people who deserve it the most. The time has come for the people of Pakistan to put an end to the nation state system that has rendered Pakistan’s leadership impotent during repeated crisis and worse made them forever subservient to foreign powers. This can only be accomplished by establishing the Khilafah Rashidah (rightly guided Caliphate) upon the method of Prophethood.