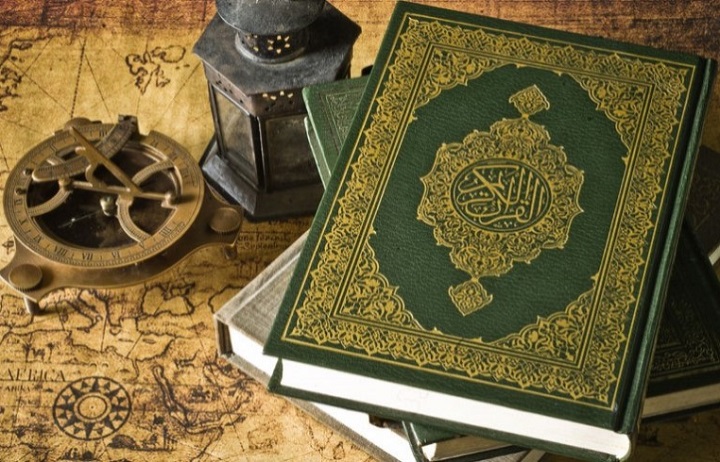 The Noble Quran is a Book of our Lord, the Almighty, Who revealed it in the Arabic language. Allah (swt) granted happiness to all of humankind, through adherence to His guidance and proceeding along His Path. He (swt) warned of all manner of miseries for the one who afflicts and moves away from that path. Allah (swt) says,

“And if there should come to you guidance from Me – then whoever follows My guidance will neither go astray [in the world] nor suffer [in the Hereafter]. And whoever turns away from My remembrance – indeed, he will have a depressed life, and We will gather him on the Day of Resurrection blind.” He will say, “My Lord, why have you raised me blind while I was [once] seeing?””  [TMQ 20:123-125].

When our forefathers, the Companions (ra) of the Prophet (saw) carried the call to Islam, with its characteristic of being a message of guidance, light and blessings to the world, they carried it with three pillars: the Noble Quran, the pure Prophetic Sunnah and the Arabic language.

The enemies of Islam had realized that the secret of the power of Muslims lies in their belief of the creed of Islam, and their commitment to implement the Shariah rulings emanating from that creed. It is the creed of the Oneness of Allah (swt), in servitude only to Him Alone, which came to the Muslims, through the Noble Quran.

They targeted the Arabic language as it is the language of Islam. They attempted to separate the Arabic language from Islam. Thus, they supported those who did not know Arabic language, its values and its properties, to assume power in the Muslim Lands. Accordingly, the importance of the Arabic language was neglected, so eventually the Ijtihad ceased. Those who do not know the rulings and knowledge of this language, cannot derive Shariah rulings. So the Arabic language was separated from Islam. The Islamic State was confused over understanding the Shariah rulings. Consequently, it was confused over their implementation. This had a great impact on the state, weakening it and weakening its understanding of the new scenarios. What creates a problem itself, can neither resolve it, nor resolve it in the right manner. This created the escalation of problems in the state, which eventually led the state to lose the ground. Accordingly, the enemies of Islam were able to weaken the backbone of Islam, though it is only for a while… for Allah (swt) refuses except to perfect His Light, and Allah (swt) is dominant over all matters, even though most people do not know this.

When the Arabic language was neglected, the Mujthahids became very few, amongst the Ummah. Generations eventually failed to understand the meanings of the verses of the Quran. The colonialist disbelievers were successful, unfortunately, in distancing us from our Deen. They were successful in dominating us. This is a situation which is not hidden to anyone.

This happened in the absence of the Islamic ruling, under the shade of the oppressive ruling, in the era of Ruwaibida (ignorant) rulers. We ask Allah (swt) to return us to our Deen. We ask Him to guide us to what He loves and is pleased with, and to help us, the Shabab of Hizb ut Tahrir to complete our great civilizational project, the project of establishing the Second Righteous Islamic Khilafah (Caliphate) upon the Method of Prophethood. By the grace of Allah, we have prepared, preserved and refined the constitution of the state, that treats all the problems of mankind, according to the noble Shariah rulings of Islam, including all of the ruling system, as well all the affairs of life within the domains of social, economic, domestic and foreign affairs. Also we have prepared a unique curriculum for the coming generations, by the grace and mercy of Allah, a distinguished educational and cultural syllabus.

This leading state will be concerned about knowledge and will honor the Ulema. It will restore the positions and statuses for the ‘Ulema and teachers within society.

This nascent state, that knows the value, importance and status of the Arabic language, will pay greater attention to it. It will make Arabic an official language. It will oblige all the Muslims from the various wilayahs to learn the language from the first grades, from kindergarten onto primary, middle and high schooling, then on to universities. It will impose the style of speaking and communication, as much as possible, in Classical Arabic in the press, in the media, in schools and universities, and in all places.

It is the state whose dawn has emerged, and it is only a matter of time for its emergence. By the grace of Allah, this state of Islam will become the leading state of the world. O Allah! Make us of its soldiers, witnesses and martyrs. Indeed, glory belongs only to You Alone, and You are All-Capable of that. All Glory is to You, the All-Hearing, the Nearest One and the One who responds to the supplication.