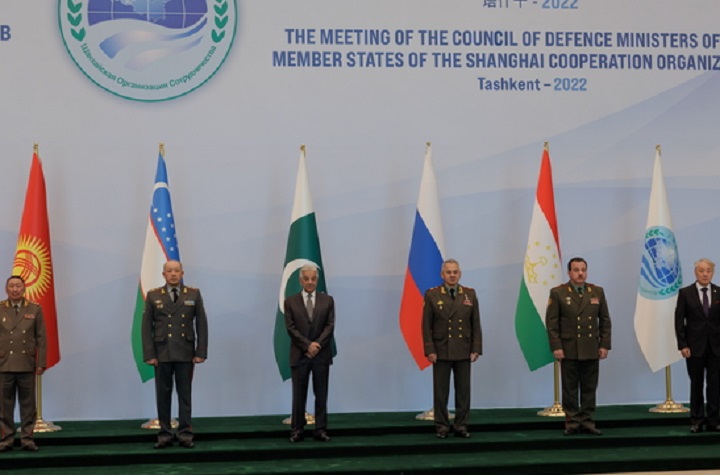 Russian Defense Minister Sergei Shoigu announced Moscow’s intention to strengthen military bases in Tajikistan and Kyrgyzstan in connection with the situation in Afghanistan. The head of the Russian Defense Ministry made the statement against the backdrop of military exercises in Tajikistan “Regional Cooperation – 2022” with the participation of the Central Asian countries, the United States, Mongolia and Pakistan.

Sergei Shoigu revealed Moscow’s plans to strengthen military bases in Central Asia in the meeting of the SCO countries in Tashkent, announcing the growing threat to the region’s security from Afghanistan:

“A serious security challenge in Central Asia remains the state of affairs in Afghanistan, where international terrorist organizations such as ISIS and Al-Qaeda are becoming more active. Against the background of the ongoing armed confrontation, the socio-economic situation is deteriorating, the ideology of religious radicalism is being implanted, drug trafficking and cross-border crime are flourishing. For our part, we are increasing the combat readiness of Russian military bases in Kyrgyzstan and Tajikistan, as well as other response forces for possible crisis situations”, – Shoigu said.

Comment:
Observers note that this statement is primarily due to the weakening of Russian military-political influence in the Central Asian region against the backdrop of the failure of the invasion in Ukraine, and not with any real threat. If there was a high threat of intervention from Afghanistan, then the Russian Federation would not transfer part of its contingent stationed in Tajikistan to the war in Ukraine. The security of the region is the last of the Kremlin’s concerns.

Kyrgyz political scientist Adil Turdukulov believes that Moscow is holding points of tension so as not to lose its influence in Central Asia. An example of this, in his opinion, is the relationship between the Taliban and Dushanbe:

“Shoigu, on the one hand, speaks correctly about some of the existing challenges in Central Asia, one of them is the situation in Afghanistan. This is very dangerous, especially for Tajikistan, which borders on it. Because there are many problems between Dushanbe and Kabul. But other reasons are hidden in Shoigu’s words. Because the geopolitical position of Russia is weakening in the region. We see that the countries of Central Asia are moving away from the Kremlin and are trying to conduct their own foreign policy. Moscow had a monopoly on political and military security in the region. Now they are afraid of losing their trump card, and this worries them greatly. Now Russia’s actions are directed towards Ukraine. It is also a site of confrontation with the West. Perhaps, if another hotbed of conflict appears, the West will be forced to negotiate with Russia. Therefore, Moscow has a reason to create hotbeds of conflict in other regions”.

It is noteworthy that at once after Shoigu’s statement there appeared some publications in Russian media about the Taliban were deploying additional forces and armored vehicles to the border with Tajikistan. For example, the Russian portals Avia. Pro and Military Affairs report that tanks and other armored vehicles of the Taliban movement were seen moving towards the border of Tajikistan.

“We are talking about the deployment of a large group of terrorists in relative proximity to the border with this state, which may be evidence that the terrorists are preparing to attack Tajikistan”, – Avia.Pro notes.