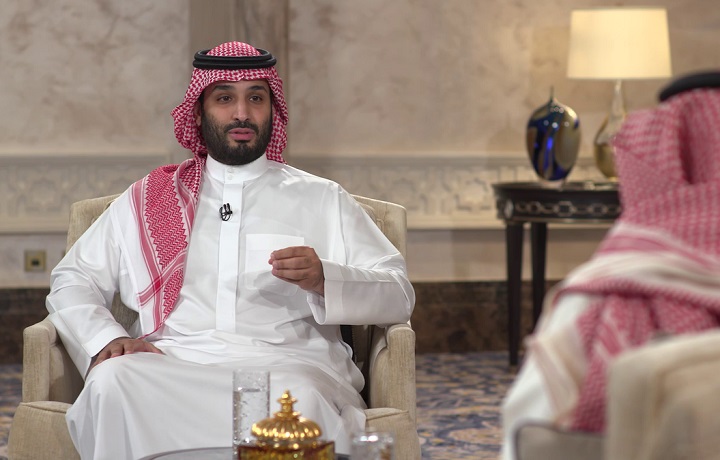 In an interview conducted with the Crown Prince of the Kingdom of Saud, Mohammad bin Salman (MBS), by Al Arabiya TV a few days ago, in which he discussed various aspects, especially the 2030 Vision and its achievements.

The 2030 Vision, which MBS brags about, is a capitalist economic vision built on no solid grounds, the purpose of which is to stabilize his rule. It is not an Islamic economic vision as it was not built on the basis of Islam. Rather, it was built on the basis of the capitalist ideology based on separating religion from life, so oil in it does not belong to the nation. It is also based on imposing forbidden taxes and dispensing with non-Saudis in the so-called Saudization of jobs, which means that the Kingdom of Saud is not a state for Muslims, and it views those who are not Saudis as inferior as it considers them foreigners, thus perpetuating the colonial vision of Sykes-Picot that severed the Ummah.

Moreover, this economic vision is based on opening the country to colonial companies, especially the American ones, selling the Ummah’s s property to them and giving it control, and it opens the country of the Two Holy Mosques and the Arabian Peninsula to tourism to the kuffar that was forbidden by the Messenger of Allah (saw).

Mohammad bin Salman has provided legislation that suits the kuffar that provides them with all recreation and enjoyment under what is called moderation. Rather, he is working to immerse society with more secularism that was hidden in the past, for he declared that the state does not punish except according to a definite clear mutawatir text, a prelude by him to suspend the Sunnah of the Messenger of Allah (saw) and revive the Sunnah of Gaddafi who wanted to obstruct the Sunnah of the Messenger of Allah. The Prophet (saw) said: «يوشِكُ أنْ يقعُدَ الرجلُ مُتَّكِئاً على أَرِيكَتِهِ، يُحَدِّثُ بحديثٍ مِنْ حديثي، فيقولُ: بينَنَا وبينَكُمْ كتابُ اللهِ، فما وجدْنا فيه مِنْ حلالٍ اسْتَحْلَلْناهُ، وما وجدَنا فيه مِنْ حرامٍ حرَّمْناهُ، ألَا وإِنَّ ما حرَّمَ رسولُ اللهِ مثلَ ما حرَّمَ اللهُ»“Soon there will come a time that a man will be reclining on his pillow, and when one of my Ahadith is narrated he will say: ‘The Book of Allah is (sufficient) between us and you. Whatever it states is permissible, we will take as permissible, and whatever it states is forbidden, we will take as forbidden.’ Verily, whatever the Messenger of Allah (saw) has forbidden is like that which Allah has forbidden.”

MBS has prepared the atmosphere for the implementation of his 2030 Vision. By imprisoning preachers and fighting the callers to Islam from sheikhs, scholars and others; whom he thinks will stand against him. Accusing them of extremism and terrorism, to satisfy his master America, whom he works hard to please, by giving the preachers of Islam as offerings to it. He abolished the so-called Commission for the Promotion of Virtue and Prevention of Vice, and replaced it with the General Entertainment Authority, which promotes immorality and vice in society. Allah (swt) says:

“Indeed, those who like that immorality should be spread [or publicized] among those who have believed will have a painful punishment in this world and the Hereafter. And Allah knows and you do not know” [An-Nur: 10].

O Muslims in the Land of the Hejaz: Allah (swt) has honored your country with the Two Holy Mosques and made it carry the last of the messages that were revealed to all people. So, rise to change this evil and prevent it before the day comes when you see vices and corruption enter your homes, then you will not be able to repel it. And enjoin the good by which you will please your Lord and restore your glory and honour, which was promised in a glad-tiding by your prophet, which is the work to restore the Khilafah Rashida (rightly guided Caliphate) on the method of the Prophethood, and this is an honour by which you will attain the following of the righteous predecessors from the noble Companions and no glory without it. Allah (swt) says:

“And whoever opposes the Messenger after guidance has become clear to him and follows other than the way of the believers – We will give him what he has taken and drive him into Hell, and evil it is as a destination” [An-Nisaa: 115].