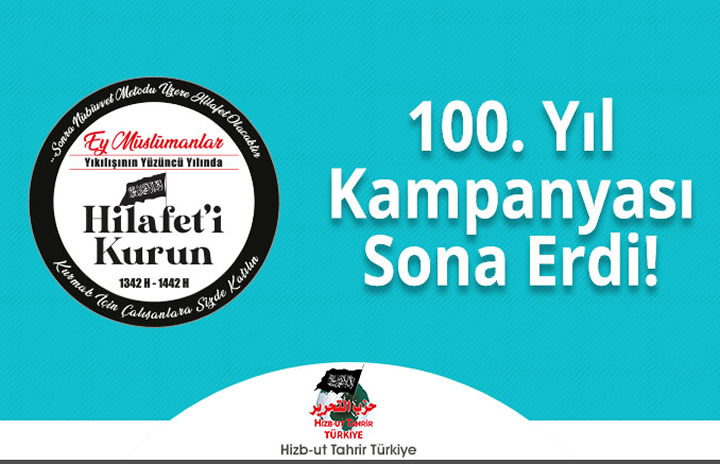 The global campaign launched by the Central Media Office of Hizb ut Tahrir on the centenary of the destruction of the Khilafah (Caliphate), on 13th February 2021 under the slogan “Upon the Centenary of the Destruction of the Khilafah…O Muslims, Establish It!”, has concluded its work with a concluding global conference held on Saturday, 13 March 1442 CE. In the opening speech, the Ameer of Hizb ut Tahrir, the Eminent Scholar, Ata Bin Khalil Abu Al-Rashtah, addressed the people of power and protection reminding them of the humiliation that they live in and the life of dignity that the Muslims lived during their history, and said to them: “O People of Power and Protection: O descendants of Khalid, Salah ud-Din and Muhammad al-Fatih Only you are the ones who can heal the Ummah’s chest from its enemies, the enemies of your Deen. Only you can break the humiliation that Muslims have reached in their lands, the lands of Islam, and you will have the honour to initiate and realize the Ummah’s hope, and the whole Ummah will stand with you, and all its soldiers will stand at the forefront and behind you. You will not be alone, Allah willing, so do your duty, may Allah bless you, rise to our victory, to support Hizb ut Tahrir for the establishment of the Khilafah Rashidah (rightly guided Caliphate).”

Within the scope of the campaign, many activities have been carried out in Turkey, similar to what happened in many countries of the world. Video clips were also filmed in ten different historical places in Turkey, and an appeal was made to Muslims: “Enough O Muslims 100 years without a Khilafah! We call you on the centenary of the destruction of the Khilafah, Establish the Khilafah again, O Muslims.” Four different online platforms were organized, in which there was presence of viewers due to the epidemic and the precautionary measures taken, they were under the titles: “What did the Ummah lose by abolishing the Khilafah?”, “Establishing the Khilafah is a Fateful Issue Requiring Life or Death”, “Hizb ut Tahrir and the Khilafah”, “The Khilafah is Not an Illusion … Rather, the Promise of Allah Almighty”; these were followed by tens of thousands of people. In addition, delegations and visiting organizations were formed within the framework of the campaign, and all the brothers visited people, including merchants, journalists, writers, representatives of civil institutions, imams, preachers, scholars, and intellectuals and opinion makers. These visits dealt with the issue of the Khilafah, its importance for Muslims, and the need to re-establish it.

However, the authorities, securities and the judiciary carried out crackdowns on the Shabab of Hizb ut Tahrir without distinction between young and old, nor between a man and a woman under the pretext of the activities that were carried out as part of the campaign, and placed them in detention. So, they arrested a total of 60 of our brothers in 13 different cities, and initiated judicial proceedings against them. As a result, 23 were released after taking their statements in the security services, and 37 of them were released via court decision. This situation is a clear indication of the tendency of the authority, which does not want to talk about the Khilafah in Turkey, which has embraced the Khilafah for hundreds of years; to practice injustice and oppression against sincere Muslims. On this occasion, we direct our words to the rulers of Turkey who take the West as guardians and hostile to Muslims: We have vowed our lives in order to the arbitrate Allah’s religion in our lives, and we have promised Allah on that, and we will not stop, with Allah’s permission, until we see the banner of Islam fluttering high in these countries.

In conclusion, we in Hizb ut Tahrir / Wilayah Turkey, ask Allah Almighty to make this campaign a means for the awakening of the Islamic Ummah, and an increase in its resolve and efforts, and the work to establish Khilafah Rashidah (rightly guided Caliphate), and ask Him the Exalted to honour us with its establishment soon than later.