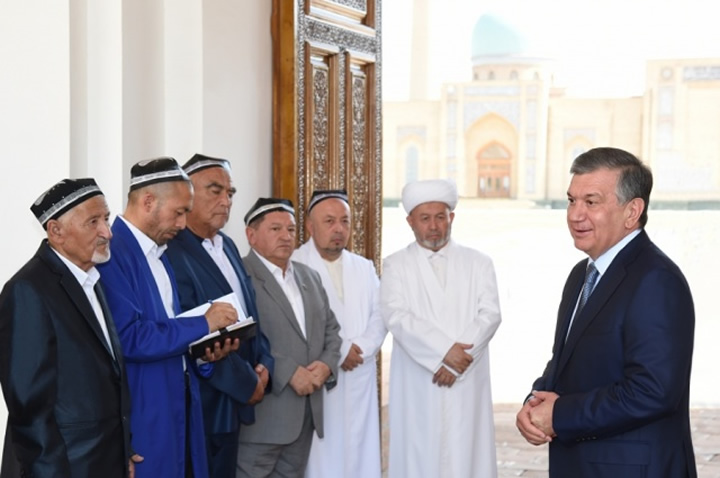 The goals of the center, the president noted, are to study enlightened Islam and raise awareness among the population and the international community about the great heritage of our ancestors. The complex will include a library, an information resource center, scientific departments, a conference hall, office premises and other facilities.

Many people ask why the president cites two Renaissances as an example. This is an idea, our goal for the future. After all, we must draw spiritual strength from history in order to reach the boundaries to which our country is striving! We hope that this center will become one of the foundations of the third Renaissance. Because it will be a scientific, secular, modern center,” the president said, getting acquainted with the future complex”.

Comment:
The rulers of Central Asia are playing on the feelings of Muslims, trying to show themselves as representatives of Islam and Muslims. They build luxurious mosques, open “Islamic universities”, monuments of Islamic culture, speak of Islam as something sacred to them. In fact, all this is a deception to get the people into confidence and reassurance. In fact, all this is a deception to earn the trust of the people and to calm them down. After all, if the rulers do not do this, people will abandon them.

Tagut does not rule according to the laws of Allah, and therefore the faith of Muslims in Allah and the Prophet Muhammad (saw) does not give rest to tyrants. Rulers use corrupt and cowardly imams to legitimize their rule and power over the people, issuing all sorts of fatwas that legitimize all decisions and urge them to submit to these criminal regimes.

The building of the “Center for Islamic Civilization” in Tashkent is one such a trick. Gathering around him cowardly and corrupt imams, talking about Islam and the great heritage of their ancestors, the president arouses feelings of pride in believers, calms them by reminding them of a glorious history. Yes, the Muslims of Central Asia had a great past, great scientists and commanders, but Tagut and his deceitful imams do not say that all this was when the rulers of these lands ruled according to the laws of Allah.

Sh. Mirziyoyev said: “We hope that this center will become one of the foundations of the third Renaissance,” giving hope for a good and bright future. From French, Italian and Latin – Renaissance means rebirth. When this word is used, they usually recall the times when culture, science and civilization developed in Europe. Thirty years have passed since the collapse of the USSR and the acquisition of “independence”, but there has been no renaissance – there has been no revival in Uzbekistan or Central Asia, and there will never be.

If we study the history of peoples who have been reborn, we will see that for the revival of a people, culture and civilization, a comprehensive idea of human life are needed, from which the system proceeds. For example, when the Arab inhabitants of the desert, who were not interested in anyone, received divine revelation and accepted Islam, they changed the world order. Such world powers as Persia, Byzantium, Rome have sunk into history and submitted to the Muslims.

Islam is a system for the life of people, society and state. Islam regulates a person’s relationship with himself, with other people and regulates his relationship with Allah. Islam consists of an idea and includes a method for putting that idea into practice. When the Arabs accepted the idea – became Muslims, and strictly followed the system, then there was a revival.

If you separate the system from the idea, it won’t work. Today, when Islam is not pretending to be a system for the life of a person, society and state, there will be no revival of Muslims. Rebirth will take place when Muslims overthrow this criminal tyrant regime and establish Islamic rule. When Muslims choose a righteous ruler who will swear to rule on the Quran and Sunnah and swear allegiance and obedience to him, then the Muslims of Central Asia will be reborn again and carry the light of Islam to the whole world.

(Indeed, Allah will not change the condition of a people until they change what is in themselves) [13:11].