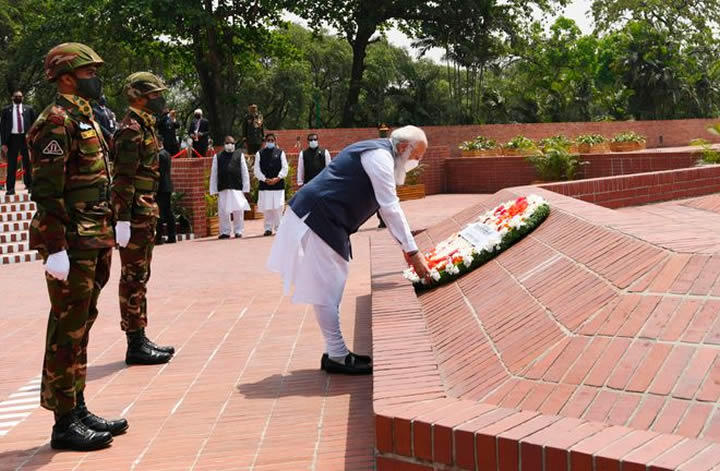 Muslims in Bangladesh are infuriated over Hasina government’s audacity to bring the anti-Muslim bigot Narendra Modi into Bangladesh on March 26 for celebrating the country’s 50 years of ‘independence’. By inviting the butcher of the Muslims in Gujarat and Kashmir and the demolisher of the Babri Mosque, treacherous Hasina did not fail to prove that her regime is the enemy to Allah Azza Wa Jal and His Messenger (saw) and the Muslim Ummah. Not only did she invite the staunch enemy of the Muslims, but also her thuggish police dared to announce that they would consider our people as ‘traitors’ and take strict legal action against them if they hold rallies against Narendra Modi! Even they crossed that limit also, when a young boy was being arrested not because of street protest but rather due to uploading an anti-Modi comment on his Facebook account. (Manabjamin, 21 March, 2021). It is a mockery by Hasina that she is asking people to celebrate ‘independence’ whereas the people are being threatened of imprisonment if they protest against criminal Modi and his aggression on Ummah’s sovereignty! And what an abhorrent subservience of Hasina that when she is not even allowing our people to call the head of the enemy state a ‘criminal’, she is allowing the minister of the same enemy state to stand on our soil and justify the border killing of our unarmed people by portraying them as ‘criminals’ (“Killings along India-Bangladesh border because of crime: Jaishankar”, The Hindu, March 04, 2021).  Allah (swt) has referred to such people as hypocrites who seek power and honor from the disbelieving enemies:

O Muslims, we know you are raging over Sheikh Hasina’s evil collaboration to have you fully surrendered to the regional geopolitical interests of the enemy India. There are no vital strategic resources, infrastructures and industries left in Bangladesh which have not been given access to the India to strengthen her regional ambition. Allah (swt) has warned us of the harmful consequences of such collaboration with our enemies that makes us their scapegoat and gives them upper hand,

“If they gain the upper hand over you, they will revert to being your enemies and stretch out their hands and tongues to harm you; it is their dearest wish that you may renounce your faith.” [Al-Mumtahinah: 2]. Other than shamelessness and falsehood, there are no reasons left for Sheikh Hasina to justify her treachery on-behalf of the Mushrik enemy state India and her Western colonialist masters. You should not be surprised by the mysterious silence of the so-called nationalist party (BNP) over Modi’s aggression, because both BNP and BJP are US-agents who are pursuing the US policy in this region to counter China and fighting the emergence of Khilafah (Caliphate) through strengthening India.

O Muslims, these are the secular rulers who were imposed upon the Muslims by Kafir Colonialists after destruction of Khilafah in 1924 CE to safeguard the geopolitical and economic interests of their Western masters by inflicting harm over the Muslim Ummah.  Will only holding protest and demonstration against Hasina lead you to your desired liberation from this Western-backed tyranny? Can you truly liberate yourselves by removing Hasina from the power only without uprooting the western secular ruling system that systematically brings these secular political parties (AL-BNP or likes) into power one after another?

O Muslims, the path to true liberation lies in our Aqeedah, that is, in the promise of Allah and the glad tidings of RasulAllah (saw). As Muslims, we should never be surprised to see our enemy conspiring and continuing their aggression against us. But it is the promise of Allah Azza Wa Jal that eventually this Ummah will be honored with victory,

“Verily, We will indeed make victorious Our Messengers and those who believe, in the life of the world” [Ghaafir:51]. And to end the aggression and dominance of the Mushrik state India and bring the entire Indian Subcontinent under the shade and justice of Islam, we must rush to bring back the promised second Khilafah Rashidah (rightly guided Caliphate) on the method of Prophethood to materialize the glad tidings of the RasulAllah (saw),

“Two groups of my Ummah Allah has protected from the Hellfire: a group that will conquer India and a group that will be with ‘Isa ibnu Maryam.” [Ahmad and An-Nisa’i]. The Mushrik enemy rulers of India will never cease to bring harm on mankind and Ummah’s sovereignty unless they are arrested with humiliation by the courageous army of the imminent Khilafah. The bigoted Mushrik rulers of India are enemy not only to the Muslims of this subcontinent but also they inflict harm upon the common people of all the religions since they keep their politics and reign alive through religious and sectarian violence. So this Ummah is in dire need now of the Khilafah’s courageous army generals like Muhammad bin Qasim al-Thaqafi who would seize today’s Raja Dhahir, Narendra Modi, to bring peace and religious harmony in this subcontinent.

Dear Muslims in Bangladesh, take heed of the advice of the truthful party Hizb ut Tahrir that the promised Khilafah is on the horizon to bring an end of the oppression of the Mushrik state India and her colonial masters. In this critical juncture of time where the Kuffar and Mushrikeen are unleashing their violence more than any other times against Islam and the Ummah, you have to take the decisive stand to bring back our only shield – the Khilafah by working with Hizb ut Tahrir and calling upon our sons and relatives in the military officers to seize the Hands of Treacherous Hasina and hand over power to Hizb ut Tahrir. This is the only way out for you, O Muslims!

“O you who believe! Answer the call of Allah and His Messenger when he calls you to that which gives you life” [Surah Al-Anfal: 24]