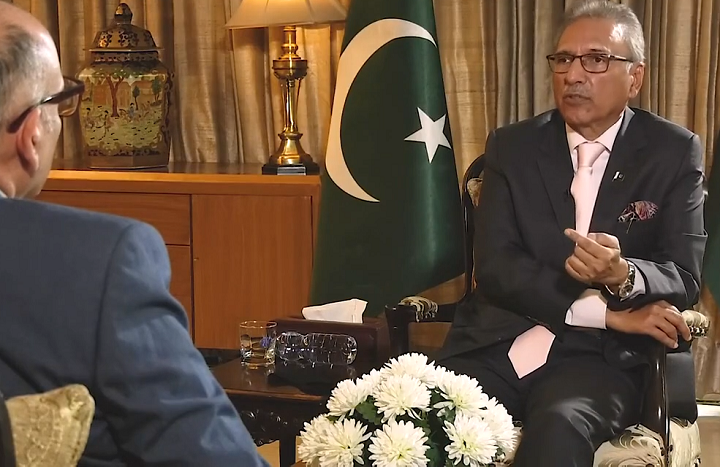 The ceasefire in Palestine neither ends the Jewish occupation since 1948, nor relieves the Muslim armies of their duty to liberate every inch of the Blessed Lands of Palestine. However, it is the rulers of Muslims that are clearly the obstacle to the liberation of Muslim Lands. In an interview to a British news agency, Pakistan’s President, Arif Alvi, claimed that, “The Muslim Ummah does not have the capacity to take action against Israel on its own because we are weak.” He further asserted, “We also….just condemned the Israeli aggression, at global level the Muslims themselves are weak, so we have to listen to the voice of the powerful.” Arif Alvi’s false claim is yet another statement on behalf of General Bajwa, who remains tight lipped due to the anger within the armed forces over his weak stances over, Masjid al-Aqsa, Occupied Kashmir and the honor of the Prophet (saw). It is a failed attempt to cover up the betrayal of the rulers of Muslims Land that flagrantly contradicts Revelation from Allah (swt), Al-Aleem, Al-Khabeer.

Today, compared to the 176,000 cowardly soldiers of the Jewish entity, the seven largest Muslim armies alone have a combined 2,787,500 lions, desiring martyrdom or victory. The weaponry of the vast Islamic Ummah far exceeds that of the puny Jewish occupation, despite its support from the US. Pakistan’s ballistic missiles can be deployed to target Tel Aviv, creating effective cover for ground forces to move in and liberate Al-Aqsa Masjid.The Jewish entity is surrounded on all sides by Muslim countries, trapped by land, sea and air. Jordan, Turkey, Egypt, Saudi Arabia and Morocco can easily cut off supply lines to the Jewish entity and impose sanctions to choke it economically. So it is clear that the problem is not any kind of weakness of the Ummah, but due to the treachery of the likes of the Mir Jafars and Mir Sadiqs of the Bajwa-Imran.

O Muslims of Pakistan’s Armed Forces! Shake off the treacherous rulers as a warrior shakes off the dust when he readies himself for battle. Do not let these spineless rulers prevent you from annihilating the occupation of the Jews, when Allah (swt) has alerted you regarding their cowardice,

“You will certainly find them most eager to cling on to life, indeed even more eager than those who associate others with Allah in His Divinity. Each one of them wishes to live a thousand years although the bestowal of long life cannot remove him from chastisement. Allah sees whatever they do.” [Surah Al-Baqarah 2:96]. Your mere declaration of Jihad will throw the Jewish forces into disarray and as for when you fight them, Allah (swt) assures you,

“They will not be able to harm you except for a little hurt, and if they fight against you they will turn their backs (in flight), and then they will not be succoured.” [Surah Ale-Imran 3:111]. And when the Western states, who persecuted the Jews for centuries and are only using them now to further their interests, see the combined forces of the Muslim Ummah moving against the Jews, they will readily abandon the Jews to their fate.Allah says,

“Intense is their hostility to one another. You reckon them united while their hearts are divided. That is because they are a people devoid of reason.” [Al-Hashr, 59:14].

Thus Allah (swt) assured you of the reality of the Jews in a Book in which there is no doubt, so mobilize. Remove the protectors of the Jewish occupation, the current rulers of Pakistan, establishing the Khilafah (Caliphate) on the Method of Prophethood in their place and mobilize! Al-Aqsa cries out for the army of the new Salahudin Ayyubi, so respond!