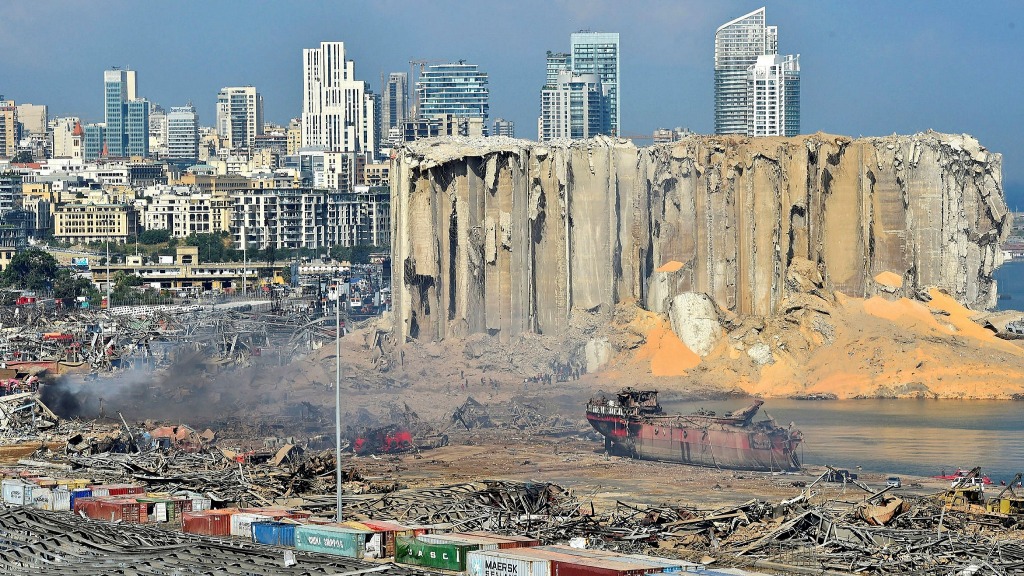 A huge explosion shook the capital Beirut this afternoon, and it became clear later that it was an explosion in the Beirut port, in one of its warehouses, and it was said to be Warehouse 12…

People have seen in the published videos the size and magnitude of the explosion, which appeared in the form of a very violent explosive wave, which affected the entire city of Beirut to the extent that the sound of the explosion reached at least 40 kilometers surrounding the capital, and the impact was also felt by neighboring countries such as Cyprus… Many from the people of Beirut thought that it was an earthquake that struck the capital, which prompted many people to utter the Shahada, thinking they were in the last moments in their lives!

The official outcome at the time of writing this statement, according to the Minister of Health, has reached 73 people killed and 4,000 injured, prone to increase. The High Defense Council declared Beirut a disaster area.

We in Hizb ut Tahrir / Wilayah of Lebanon, as we pray to Allah for the safety and security of the people of Lebanon, we ask Allah (swt) to be merciful to the wounded and the injured, the matter is so grave that the devastating scenes in large areas which are difficult to describe, have moved many journalists and observers to tears…

The certain and definite matter at this point is the presence of highly explosive materials in these warehouses! Whether it was weapons of the Iran party targeted by Jewish planes, or high explosives stored in the port in huge quantities and in vain, then in both cases, the fundamental question is: how is it permitted for high explosives, regardless of whether they are weapons or others, to be present in a port connected to the city that is considered a vital nerve for the country, and in the middle of populated residential areas, how, you who are corrupt?!!

This explosion revealed the depth of corruption in the state apparatus, a corruption that reached the point of placing the capital on an explosive volcano without any accountability or control, whether it was weapons or highly explosive materials.

As if it is not enough that the people have lost their political security in the country, and then their health security, the danger has become a reality to the security over their lives and the lives of their children and their families, without this government and previous governments doing anything that would make people safe, or doing something practical to hold to account every corrupt in this authority, which made the country’s facilities, especially the port, a den of corruption; a corruption that affected people’s lives in all its aspects, even while they were sitting in their homes… And such corrupt people still cling to power and rule… but for how long?!

As for the corrupt political class in Lebanon, which has silenced the tongues of those responsible for hours against any statement!!! Although they are the kings of pronouncements and swaggering, to this class, and whoever supports it, strengthens it, or is strengthened by it, we say to them the saying of the Messenger ﷺ: «اللَّهُمَّ مَنْ وَلِيَ مِنْ أَمْرِ أُمَّتي شَيْئاً فَشَقَّ عَلَيْهِمْ فاشْقُقْ عَلَيْهِ، وَمَنْ وَلِيَ مِنْ أَمْرِ أُمَّتِي شَيْئاً فَرَفَقَ بِهِمْ فَارْفُقْ بِهِ» “O Allah! Treat harshly those who rule over my Ummah with harshness, and treat gently those who rule over my Ummah with gentleness.” [Muslim]

The bitter truth is that Lebanon, like all Muslim countries, lives in a state of political, economic and social insecurities, perhaps unprecedented in history… Therefore, people are called upon today, especially the people of power and influence, to end these governments and regimes, for the hearts reached the throats, and there is no effective solution for such scums, except to extract them from their roots, otherwise the transition from one catastrophe to another is endless, and it is not known in what manner will calamities occur at the hands of these corrupt.