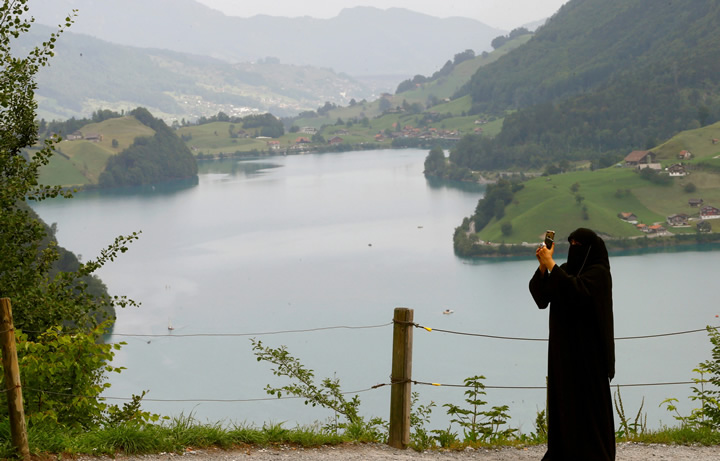 Switzerland has scored a stunning own-goal with its new law banning the wearing of a full face covering in public. It joins the ranks of other repressive regimes who have targeted Muslim women with similar outlawing of cloth. Switzerland now stands in the hall of shame alongside the likes of France, Belgium, The Netherlands, Denmark, Austria, Egypt, Uzbekistan, Congo, Chad, Sri-Lanka and others with horrific records of abusing minorities.

Such legislation has often been justified by claims that covering the face is against the values of the country, while in reality all such bans are entirely aimed at denying Muslim women basic rights, in complete contradiction to their professed freedom and democracy.

All of these places that tried to dictate a fixed tradition of showing one’s face have been happy to change their values to wear face coverings during the Coronavirus pandemic. At other times the justification has been explicitly stated as clamping down on religious extremism. In reality these bans only prove how at risk of radicalisation by secular extremists and other bigots the general population are.

The world looks on with dropped jaws wondering whether this is some kind of sick joke. Democracy has utterly failed, yet its ardent defenders seem unaware that they themselves are the ones giving into radicalisation and extremism, as they discard the most fundamental tenets of their ideology one by one.

Truthfully the secular extremists have no ability to defend or justify their secular creed and values. They cannot debate ideas with ideas, so they resort to bullying, harassment and repression to enforce their reactionary ideology on the people. Given a truly open debate, the people would quickly see the shallow baseless nature of the secular ideology, and consign it to the dustbin of history where it belongs. They will see how it is incapable of solving basic human problems, or creating harmony between people of different beliefs, despite the fact that the only justification that secular apologists ever present is their false claim to be able to harmonise people of different faiths. The falsity of their claims is exposed by such clothing bans and the intolerance that they represent.

It is no wonder that secular Europe has for decades continued to support bloody dictators overseas, despite their obvious human rights abuses, as this word human rights has never been more than a slogan. They point it at Muslims every time they want to claim their arrogant superiority, while in reality they are happy to deny basic rights to minorities anytime it suits them. They lied when they claimed that Islam was spread by the sword, while in fact secularism was and still is spread by bullies and bullets.

When Belgium introduced its own niqab ban in 2011, Dr. Nazreen Nawaz, Director of the Women’s Section of the Central Media Office of Hizb ut Tahrir, commented:

“While European governments face the wrath of their public due to the devastating effects of their capitalist casino financial system, it is blatantly clear that they are using this diversionary ‘Niqab debate’ as their own veil to conceal the political and economic inadequacies of their capitalist secular liberal ideology. They are effectively using Muslim women as human shields to protect them from the fury of their people caused by their political and economic incompetence.”

“It is becoming all too familiar what an ‘open, liberal, tolerant society’ really represents – the openness to exploit the bodies of women in advertising and entertainment but not for them to dress modestly; the liberty to insult the culture of minorities and strip them of their rights; and the tolerance to racist expression and discriminatory legislation. … as xenophobia rises across Europe; as massive inequalities in wealth serve as an indictment of free-market economics; and as social and family meltdown afflicts liberal societies – all reflective of the failures of the secular ideology – it is understandable why European parliaments would see the need to employ repressive social integration policies that use coercion rather than conviction in order to get Muslim women to embrace their flawed values in exchange for sound Islamic ones.”

“Niqab bans simply provide yet another example of how the capitalist secular liberal democratic system offers no model for life for Muslims in the West and nor a model for governance for the Muslim world. Unlike the secular democratic system, Islam or the Islamic Caliphate ruling system views modesty as a virtue rather than a crime. It prohibits the stigmatization of minorities in opportunistic political games by those in authority, and the rights of citizenship of Muslims and non-Muslims, men and women are set in stone rather than fluid and determined by political interests. Legislation that is derived from a fixed Islamic basis prevents the prejudice of the majority from stripping away the basic rights of minorities and the shunning of nationalistic based politics in exchange for laws that ensure that the needs of all ethnicities and faith groups are respected and fulfilled equally establishes a sound basis for harmonising society. This is a system therefore that does not need to use ‘smokescreen politics’ in order to win over its people.”