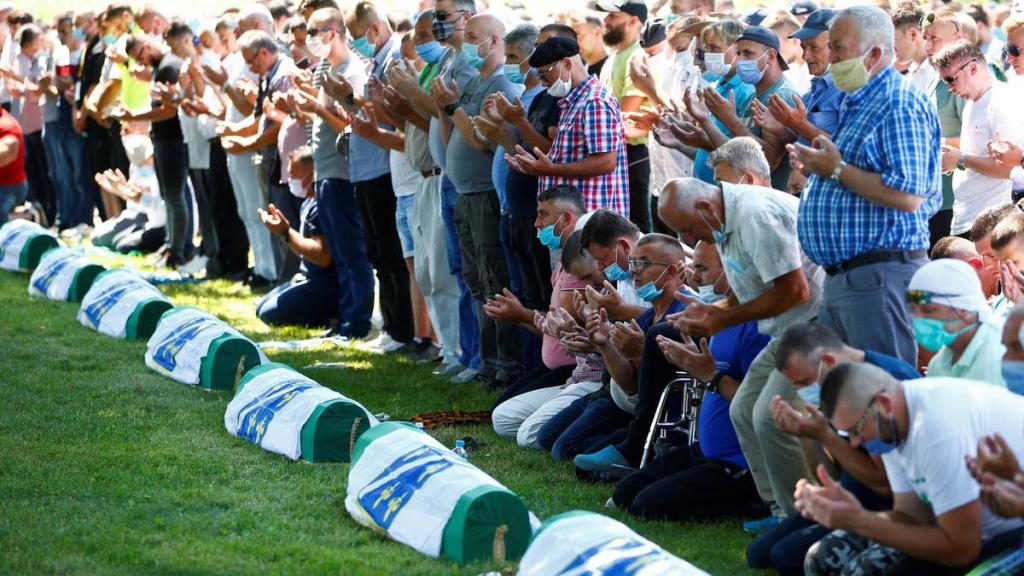 On 11 July 1995, Bosnian Serb units captured the town of Srebrenica in Bosnia-Herzegovina. “All who wish to go will be transported, large and small, young and old. Don’t be afraid… No one will harm you.” Serbian army General Ratco Miladic. (Source: BBC News 11/07/2020)

I’ll never forget Azra as she recalled the unfolding of the massacre at Srebrenica. Hands clenched, her face was etched with pain, and a stream of tears ran down her face.

The horror of what she had witnessed was almost surreal – months later she still lived every moment in a waking nightmare, unable to forget the images of her father and uncles taken away at gunpoint, hands bound with bloodied faces.

On the morning of the 12th July 1995, under the command of Ratco Mladic, Serb units gathered thousands of Bosnian Muslims, at the Dutch base of Potocar. Separating the women and children from the men and teenage boys. The Serb forces unleashed devastating attacks upon the of Muslims; slitting the throats of babies and raping countless women and girls. The men were gathered in old factories and warehouses, some were killed instantly, and some moved in trucks to meet their death at other locations. Around 15,000 men managed to leave the enclave at night and began the infamous ‘death march’. A miles-long walk to the town of Tuzla, which was violently intercepted by Serb forces. Hundreds who fled to take cover in the woods were hounded out, their possessions burned, they were beaten to death. Thousands more wandering the hills were re-captured and shot in cold blood over the next seventy-two hours.

This massacre of two generations of Muslim men was part of the wider genocide against Muslims by Serbian forces who sought to dominate the diverse Yugoslav region of Bosnia-Herzegovina, made up of Muslim Bosniaks, Orthodox Serbs and Catholic Croats. When Ratko Miladic entered the town, he stated on a live broadcast that he intended revenge for the ‘rebellion of the Dahija’s’ – a Serbian uprising dating back to 1804 in the same area which had been suppressed by the Ottoman rulers of the time.

Despite this threat and a thirty-mile safe zone around the town of Srebrenica, UN forces not only utterly failed to keep peace, but facilitated the massacres by denying safe haven to 20,000 men, abandoning them to the Serbian death squads. Likewise the ‘peace keepers’ halted air strikes on Serbian military posts when a few Dutch hostages were taken, and the same Dutch armed forces also conceded to Serbian demands to hand over 5,000 male refugees from their bases, in full knowledge that they would be killed.

Having already demilitarised the Muslim fighters in the town, which left the Muslims defenceless, and facilitating mass starvation caused by a three-year siege by the Serbs; it can be said that the UN was utterly complicit. Twenty five years later many like Azra still don’t know what happened to their relatives. They live without closure to these incomprehensible events, patronized and pacified into accepting their trauma as mere mistakes “that will forever haunt the history of the United Nations” as former UN Secretary General Kofi Annan said. Mere lip service, given the ongoing genocides in Syria and Yemen, the ethnic cleansing of the Rohingya, the gradual eradication of the people of Palestine and Kashmir from their homeland, and the tinderbox situation of Muslims in India and the CAR.

Allah (swt) says, إِنَّمَا السَّبِيلُ عَلَى الَّذِينَ يَظْلِمُونَ النَّاسَ وَيَبْغُونَ فِي الْأَرْضِ بِغَيْرِ الْحَقِّ أُوْلَئِكَ لَهُم عَذَابٌ أَلِيمٌ “The cause is only against the ones who wrong the people and tyrannise  upon the earth without right. Those will have a painful punishment”. [Surah Ash Shuara: 42]