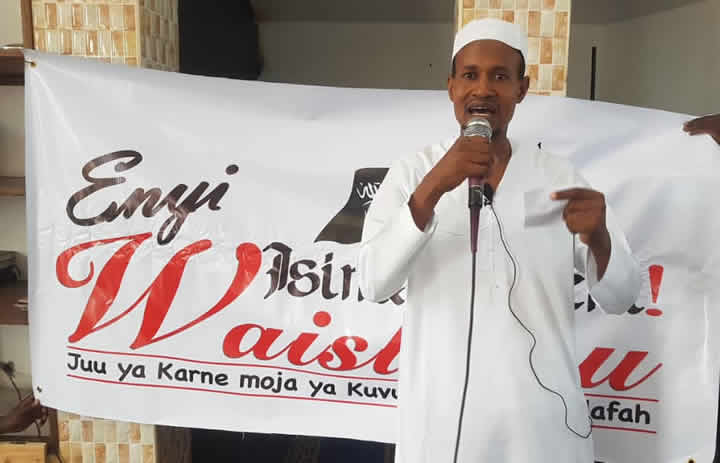 With the guidance of the Ameer of Hizb ut Tahrir, Eminent Scholar Ata Bin Khalil Abu al-Rashtah, may Allah protect him and take care of him and send victory at his hands, following ongoing campaign of the painful centenary of the demolition of the Khilafah (Caliphate) on 28 Rajab 1342 AH, Hizb ut Tahrir / Tanzania in the second week conducted various activities and events focusing of the theme and thoughts of second week as follows:

a. Video clip: A video clip was recorded and posted in Ht Tanzania Facebook account calling Muslim scholars to work for re-establishment of Khilafah and to support Hizb ut Tahrir in its mission.

b. Live Facebook programme: On 12 Rajab 1442 AH – 24 February 2021 CE, a panel of 2 Shabs had Facebook live programme in which they conveyed the theme of campaign as well as receiving comments and questions from the audience.

d. Radio: A Shab had an opportunity at Chuchu Fm, Zanzibar in which partially aired thoughts of the second week. (14 Rajab)

4- VISITS
Three visits were made, two in Dar es Salaam and one in Tanga region:

In Dar es Salaam on 12 Rajab 1442 AH – 24 February 2021 CE, the Head of Central Contact Committee of Hizb ut Tahrir / Tanzania Sheikh Mussa Kileo with Eng. Muhammed Nassor visits Sheikh Jabir Katura, one of the prominent Sheikhs, among the earliest graduate on Islamic Studies at Madina University, who was once a chief Imam of Friday Mosque in Mwanza city. Sheikh Katura was reminded on the role of scholars in re-establishment of Khilafah.

Also on 10 Rajab 1442 AH – 22 February 2021 CE at Dar es Salaam, some Shabs visited Sheikh Shukuru Khalfan Mkumba one of the leaders of Masjid Taqwa, Mashine ya Maji, Tandika reminded him on responsibility of our Ummah especially scholars.

Also at Horohoro Boda village they met Ustadh Maulid Reza one amongst the leader of Masjid Muzdalifah.

Cards distribution in schools and pasting stickers in various places in public places took places such as; Kigamboni Madrassa, Dar es Salaam and Chukwani, Kwerekwe and Bumbwini all in Zanzibar.

We pray to Allah Taala for His Tawfiq on these activities and others that will be conducted throughout this noble month of Rajab, and in Him we trust for His Nusra of the reestablishment of Second Khilafah Rashidah (Rightly Guided Caliphate). Amin