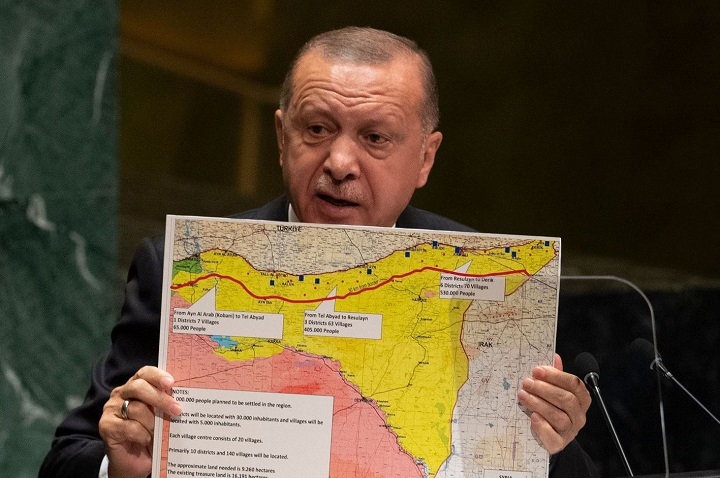 Turkish President Erdogan announced that Ankara is continuing to establish a safe zone with a depth of 30 km along the country’s southern border with Syria. Adding that Turkey is preparing to launch a new military operation to respond to the attacks that threaten Turkey’s national security, adding: “We will complete the security belt along our border with Syria as soon as possible.” It was approved by the Turkish National Security Council.

US State Department spokesman Ned Price said that “such an escalation would endanger the lives of US military personnel deployed in the region.” “We condemn any escalation, and we support maintaining the current ceasefire lines,” he added.

As for Russian Foreign Minister Sergey Lavrov, he stressed that his country’s position on the expected Turkish military operation in northern Syria is largely consistent with Turkey in this regard. He added, “Russia attaches importance to Turkey’s legitimate fears of the presence of terrorist organizations supported by Washington on its southern borders.” Despite another statement by the commander of the Russian forces in Syria, General Alexander Chaiko, in which he affirmed during his meeting on Tuesday with Mazloum Abdi, the commander-in-chief of the Syrian Democratic Forces, his country’s rejection of any new military operation inside Syrian territory.

As a result, recently the US State Department Deputy Counsel Barbara Leaf comes out in response to a question from a member of the US Senate Foreign Relations Committee about the possibility of Turkey withdrawing from the military operation in northern Syria: “We are doing everything we can to dissuade the Turkish government from the military operation, as it will jeopardize the American mission in Syria. But let’s be frank, they (the Turks) are not backing down.”

Despite the contradictory statements made by American officials and after them the Russians, which give contradictory suggestions about the military operation that Turkey is threatening to carry out to establish a safe area in northern Syria, there are constant facts that must not be lost on the minds of the people of the As-Sham Revolution:

First: All the countries that intervened in the Ash-Sham revolution intervened to eliminate it and to preserve the system of labor and criminality in Damascus.

Second: The Turkish role, which adorned in the guise of a friend, was to conspire against Ash-Sham revolution and deceive it, and drag it into slippages far from its goals, and from what it came out for, in the service of America and to achieve what is possible of its interests and national security.

Third: The safe zone that Turkey seeks to establish, and which is trying to implement its idea on its southern borders in northern Syria, is seeking to establish it in order to protect its national security only, and at this time, electoral considerations overlap, through which Erdogan is trying to raise his low popularity. It is certainly not a service to Ash-Sham revolution, nor out of concern for its people.

Fourth: The countries that put their policies in the service of the plans of the major countries, link their policies with the policies of these countries, and wait for international approval to implement their desires and decisions, are hesitant countries and unable to achieve their real interests. For Turkey is a country that possesses great capabilities, in terms of army, energies, and capabilities, but it is still waiting for the approval of America and the active countries to realize its desire to establish a safe zone.

Fifth: The root of the disease and the cause of the calamity that befell the revolution of Ash-Sham is the association with the supporting countries and the abandonment of those who dominate the revolution, who had the idea that the revolution could not be won without international support, so they surrendered to that, and the dirty political money came to eliminate what was left of goodness in their souls, so they gave up on the independence of the decision, and they usurped it from the people of the revolution and handed it over to the supporting countries and their intelligence, and they were satisfied to be its servants, so they enabled them to realize their conspiratorial plans against the revolution of Ash-Sham.

Sixth: The revolution came out to overthrow the criminal regime, and unless it was able to achieve its principles and overthrow the system of oppression, murder and criminality, and establish the system of Islam, the system of justice, in its place, then all the great sacrifices of the people of Ash-Sham will be in vain.

The liberation of a region that has narrowed or expanded is not a victory for the revolution and its incubator. The liberation of towns such as Manbij and Tal Rifaat and its surroundings, as is rumored, and the return of its displaced people to it is undoubtedly a good thing, but it is a dangerous matter if it is deceitful by our enemies to eliminate the flame of revolution in the hearts of the people of these areas and their surroundings, and in the hearts of the incubator of the revolution, considering that this as portrayed by the conspirators, the most that can be achieved.

Seventh: The exposure of the disease afflicting Ash-Sham revolution leads to the knowledge of the cure and effective treatment, by the will of Allah the Almighty, the Majestic. The most important thing for Ash-Sham revolution today is the conscious political leadership that relies on its Lord, clings to the strong rope of Allah Alone, and cuts the ropes of everything else. A leadership that believes in the capabilities of its people, its brothers, and its entire Ummah, and works with them and for them. A leadership that realizes the deceptions and schemes of its enemies, exposes them to the people, warns against them and fails them, and it walks with the loyal of its Ummah‘s sons with insight, because it has a clear and crystallized project on which all segments and energies gather, and all of them are melted, in one crucible to move towards achieving the goals and constants, on guidance and insight, according to a legitimate method Clear and straight, it is part of the Ummah‘s project emanating from its faith, which pleases our Lord Alone and never turns to the satisfaction of others.

Eighth: We say to our patient and hopeful revolutionists, that your brothers in Hizb ut Tahrir, whom you have always known, the pioneer who do not lie to their people, have worked to crystallize a clear project, adopting the method of the Messenger of Allah, peace and blessings be upon him, to establish the Khilafah Rashidah (rightly-guided Caliphate) state upon the method of the Prophethood, which will make this project a practical reality. Through the efforts of the loyal sons of the Ummah who gave themselves to Allah and followed the guidance of our leader, our master and our Prophet Muhammad (saw) and they believed in the promise of Allah the Almighty, and believed the good news of the Messenger of Allah (saw) and trusted the sons of their Ummah, and that victory would only be at the hands of the sincere and honest among them who rely on Allah Alone. Certainly, it is coming soon, Allah willing.

Put your hands in theirs in order to support our religion, establish an edifice of our glory, a source of our pride, and achieve our salvation and victory.
Allah (swt) says:

“We certainly help Our messengers and the believers, ˹both˺ in this worldly life and on the Day the witnesses will stand forth ˹for testimony˺” [TMQ Ghafir: 51].