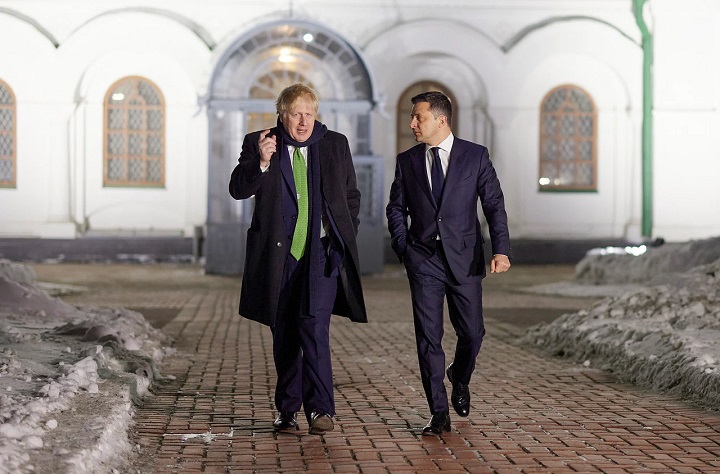 British Prime Minister Boris Johnson has invited Ukrainian President Volodymyr Zelensky to create a new alliance, an alternative to the EU, that could include the Baltic states as well, the Italian daily Corriere della Sera has reported citing its sources. This alliance could include, in addition to the UK and Ukraine, Poland, Estonia, Latvia, Lithuania and possibly later Turkey. (Source: lrt)

The Russian invasion in Ukraine has been going on for three months now. There is a need to clarify the current positions of the parties in this conflict in order to better understand what is happening.

The position of the Russian Federation in this conflict is monosyllabic. Being unable to conduct effective political maneuvers in the international arena, Russia actually fell into a trap set for it by the United States. Today, the Ukrainian conflict for Russia has turned into a swamp, reminiscent of a quagmire in which the USSR got stuck in Afghanistan.

In the current situation, spurred on by the myth of the invincibility of the Russian army, which ensures security inside the country, Russia is forced to go only forward, that is, to intensify the escalation. Defeat in the war in Ukraine, and even a truce, threatens the existence of the Putin regime itself.

Russia is the lead party in this conflict. This, in particular, is acknowledged by Putin himself in his following words: “If there was at least one chance to solve this problem by other, peaceful means, we, of course, would use this chance. But they didn’t leave us this chance, they simply didn’t give it. There was simply no other choice.”

Therefore, Russia’s position in this conflict does not require deep study, since it is simple and primitive. The essence of this position is to escalate to complete victory, without any possibility of compromise.

The position of Europe, in particular Germany and France:

In the first weeks and months of the conflict, Germany and France were dumbfounded by the audacity of Russia, which invaded the territory of Ukraine. Despite the fact that Emanuel Macron made some attempts at telephone conversations with Putin at the very beginning, in the end he agreed that a compromise could not be reached.

The EU leadership, with the approval of Germany and France, began to introduce new packages of sanctions one after another. However, time passed and the shock of the first weeks began to fade. This was facilitated by the decisive steps of the United States aimed at achieving its interests in this conflict.

On March 26, 2022, US President Biden visited Poland where, during his speech in Warsaw, he spoke about the greatness of the Ukrainian and Polish peoples and their important role in the fight against evil that threatens the entire civilized world. It should be noted that Biden never mentioned Germany and France in this speech, never spoke about their role and merits in this conflict.

Prior to this, on March 17, Ukrainian president Zelenskyy addressed the deputies of the German Bundestag and in his speech criticized Germany for the policy of appeasement that it pursued against Putin until February 24, for putting trade above human lives, and also for delays in the supply of modern weapons.

Germany and France have realized the consequences of their passivity, while the US is directing this conflict towards a solution that will only be in America’s favor. On the one hand, the main players of the EU in the face will be weakened by the severance of economic ties with Russia, and on the other hand, an alliance of Poland, Ukraine and the Baltic republics is emerging in Eastern Europe, which, if Ukraine joins the EU, will significantly strengthen the pro-American lobby within this political union.

Deprived of the opportunity to pursue an absolutely independent influential policy due to the general weakening, Britain in this conflict, as usual, adheres to the policy of serving American interests while simultaneously striking at its competitors in Europe, such as France and Germany. Even before the events of February 23, Britain was adding fuel to the conflict in the Donbass, and also supplied thousands of NLAW anti-tank systems as part of the American policy of arming Ukraine, which the short-sighted Russia perceived as a challenge to itself and eventually resorted to a full-scale invasion.

Moreover, Britain, in its corporate style, dares to attack even the United States, in particular, for delaying the supply of American MLRS samples to Ukraine. The need for such supplies was expressed in an interview with Bloomberg by British Prime Minister Boris Johnson, who said that the American MLRS “will help them [Ukrainians] protect themselves from attacks by very powerful Russian artillery, and the world community must give in.”

Now Britain is proposing Ukraine to create a new alliance in opposition to Brussels, which should include Britain, Poland, Ukraine, Lithuania, Latvia, Estonia, and eventually Turkey. Undoubtedly, this proposal by British Prime Minister Boris Johnson became possible with the consent of the United States and will be used as a factor of pressure on the EU on the eve of the EU summit on June 23, which will decide on granting Ukraine the status of a candidate country for EU accession. The union proposed by Johnson does not pose any threat to the United States, and therefore is beneficial for them, since it will consist in its majority of countries in which the United States has significant political, economic and military influence.

So in this conflict, Britain is the conductor of American interests, while at the same time striking at its international rivals, including even the United States.

America is the main beneficiary in this conflict. After all, it is no secret to anyone that in these months there is a weakening of all its rivals – Europe represented by France and Germany, Russia and China, which now cannot even dream of any alliance with the Russian Federation to strengthen against America.

With regard to the leading countries of Europe, the United States aims at a complete severance of any economic relations with Russia. Particular attention is paid to Germany’s refusal from Russian energy resources, oil and gas. In principle, the political decision to refuse was taken by Germany and the EU as a whole in the very first weeks of the war. However, in practice, the implementation of these intentions, according to the statements of the EU leaders themselves, will take at least a year.

Thus, a too quick end of the Ukrainian crisis is unfavorable for the United States. When Russia realized in late March that taking Kyiv was clearly impossible, it tried to present its retreat from the Kyiv and Chernihiv regions as a gesture of goodwill as part of the Ukrainian-Russian peace talks in Istanbul. At that time, Russia was discouraged by the failure of its stupid blitzkrieg, which aimed to take Kyiv and change the Ukrainian leadership. In those days, there were signals from Moscow about a predisposition to negotiations.

After that, many military experts started talking about the fact that if Ukraine receives military assistance from Western countries as soon as possible, in particular heavy weapons, then the counteroffensive of the Armed Forces of Ukraine can begin within a month, and within 3 months it will be possible to talk if not about complete completion conflict, then about reaching the borders at the time of February 23, 2022. Apparently, this was the reason why the United States, despite all the assurances to support the people of Ukraine in their war against the Russian aggressor, actually slowed down the delivery of critical artillery systems to Ukraine. We are talking about two multiple launch rocket systems (MLRS) – M142 HIMARS and M270 MLRS with a firing range of up to 300 kilometers. These systems are at the very top of the list of weapons that Kyiv would like to receive from Western countries. On May 21, on the eve of online talks between defense ministers of more than 40 member states of the Ramstein-2 contact group, President Volodymyr Zelenskyy openly said this, “I have no secrets. We appeal to all countries with a request to supply us with MLRS systems, with the help of which Ukraine will be able to take the initiative and begin to liberate its territory,” he said. However, no decision was made to transfer these systems at this meeting.

On May 18, Politico wrote about the doubts of the American administration. An anonymous source in the US presidential administration told the publication that Washington does not really want to transfer such powerful systems to Kyiv. The Americans allegedly fear that, having received such a powerful weapon in their hands, the Ukrainians will begin to fire at targets on Russian territory.

On May 28, information appeared that the United States nevertheless made a decision on the supply of these weapons. However, the fact remains that America does not want a quick victory for Ukraine, because this time is not enough to achieve its goals in relation to Western European countries, in particular Germany and France. America has nowhere to hurry because time plays into its hands. In turn, Germany and France decided to take advantage of this delay in order to try to seat the parties to the conflict at the negotiating table. Talks about the need for concessions on the part of Ukraine, including territorial ones, in order to prevent an even greater escalation, began to actively sound on the European agenda.

Apparently, the leadership of Ukraine understands about the artificial delays in the supply of arms from Europe and the United States. That is why Aleksey Arestovich, Advisor to the Head of the Office of the President of Ukraine, during a YouTube stream on May 25, 2022, burst into obscene language against those European politicians who offer Ukraine to give up part of their territories in exchange for peace. More restrained was his criticism of the American government. He noted that the hitch in the supply of critical weapons to Ukraine led to the fact that Russia was able to gather resources, seize the initiative and inflict serious blows on Ukrainian troops, which lead to heavy losses in manpower.

It is worth noting that Arestovich is a representative of the Ukrainian authorities, who is allowed to express the position of the authorities in such a frank form that the President of Ukraine, the Minister of Foreign Affairs and other speakers of a higher level cannot afford. Nevertheless, in the current situation, the Ukrainian authorities can only come to terms with the pace of arms supplies, since the state of the economy and dependence on Western weapons do not allow for an independent policy.

The Ukrainian crisis is yet another confirmation of the fact that the peoples, their sovereignty, resources, life and blood are hostages of the struggle between the superpowers. And even those of the superpowers that pose as friends and helpers of the oppressed peoples are in fact the main instigators of conflicts, and the main beneficiaries of them. And all the rhetoric about the right of peoples to self-determination and independence, human rights, the value of human life and care for women, old people and children, are nothing more than a smokescreen for their vile policies.

This state of affairs will continue until true divine rule is restored on the world stage, in the form of a Second Righteous Caliphate, according to the method of prophecy, for which concern for the well-being of all humankind will be the true goal, and not an empty slogan.

“But they will shake their heads and say, “When will this happen?” Say: “Perhaps it will happen very soon!” [Al-Israa: 51]