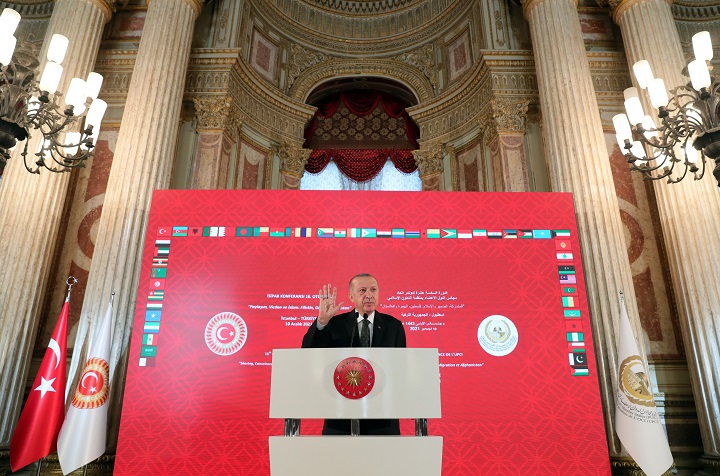 President Recep Tayyip Erdogan spoke at the Parliamentary Conference of Islamic Countries at Dolmabahce Palace. Erdogan, who quoted from Surah Al-Baqarah during the speech, stated that Allah orders as follows, namely: “And We will surely test you with something of fear and hunger and a loss of wealth and lives and fruits, but give good tidings to the patient”. (Agencies 10.12.2021)

Comment:
The usual habit of rulers never changes in Turkey. They either make promises to caress the feelings of the Muslim people in order to be in power during the election process. Or, when their political ambitions begin to be compromised, they try to deceive the Muslim people by harping on the moral, patience and honesty provisions of Islam. It is undoubtedly the greatest feature of President Erdogan, who has specialized in this respect, which has kept him in power for 20 years. Sometimes he swinged the Holy Quran at election squares. Sometimes he gave an ayah about interest. Sometimes he gave examples from the life of the companions. He spoke about the justice of Umar (ra). And recently, he kept harping on the 155th ayah of Surah Al-Baqarah, due to the fact that the corrupted capitalist system they have implemented for 20 years is leading the people to a heavy economic depression. The President, who advises the people to have patience, is chewing up and spitting out Islam’s all values and rules for his power. Their situation is like the situation Allah (swt) specifies:

“Do you order righteousness of the people and forget yourselves while you recite the Scripture? Then will you not reason?” [Surah Al-Baqarah 44].

He takes the Holy Quran in his hand, but doesn’t involve any of its rules in his ruling. He complains about usury, but he doesn’t do anything to abolish interests. He implements the capitalist economic crisis system which has been implemented for years, and when he is unable to manage the crises, we are under the economic attack of foreign powers. For this, he and his party try to cover up their incompetence with inculcations of patience to the people. The most amazing is that although they say it is the attack of foreign powers, they never give names. And they do not keep away from political, military and economic relations with all those countries. Just as they say there are ayat with regard to interest, but pride themselves on interest loan in another statement.

If the President was truly sincere in his statements when he read the ayah about hunger, fear, and the shortage of products and goods, he would first show with his life that he was a part of this challenge. He doesn’t make the slightest concession to his lavish life. There is a distance between his ultra-luxury life and the life of people like the distance between the earth and the sky. This is the most concrete indication that rulers are in a valley but people are in another.

Put the property you own to the service of the Deen, leave the practices that Islam forbids, be tied to what it orders and implement Islam as a whole, and live as Umar and not as Croesus’. Then, this people shall be patient to hunger as well as poverty. Set the Chinese model within the capitalist crisis system or the model of advanced countries aside. Pass to the economic system of Islam which has been implemented for centuries with its stability, so that the people will get out from this crisis and distress as soon as possible.