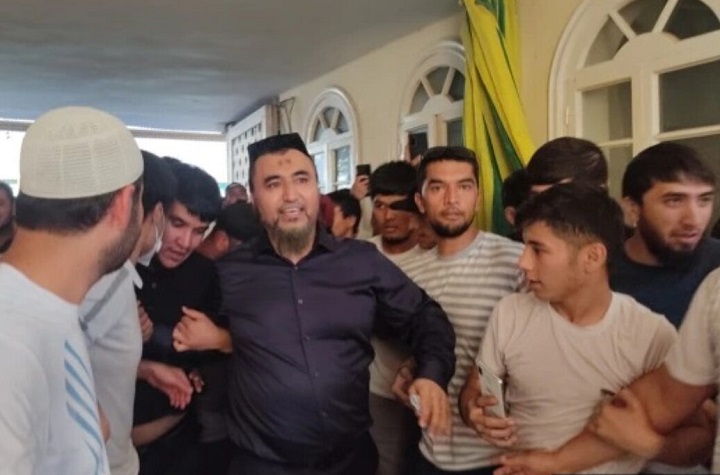 By the decision of the Bishkek City Court dated August 27, the famous imam Rashod Kori Kamolov was released from prison before the end of his term of imprisonment. On August 28, the imam returned to his hometown of Kara Suu, Osh Oblast, local media reported.

The court ruled that Rashod Qori will spend the remaining seven months at large. According to his lawyer Khusanboy Soliyev, the imam‘s early release became possible due to the positive characteristics presented by the administration of the correctional institution, since all employees and inmates of this institution respected and loved Rashod Kori.

Comment:
The news about the release of Rashod Qori caused a joyful response in the Kyrgyz society. So, in his hometown the famous imam was greeted by hundreds of people, and many Kyrgyzstanis congratulated each other on this event in social networks, wishing to the imam success in his affairs.

Recall that Rashod Qori was the imam of the Al-Sarakhsi mosque in the Kyrgyz city of Kara Suu from August 2006 till February 2015. In February 2015 he was arrested by the Kyrgyz authorities on charges of involvement in the Hizb ut-Tahrir and dissemination of calls for the revival of the Caliphate. In November of the same year, he was sentenced by the Osh Regional Court to 10 years in prison, despite the fact that  mufti of Kyrgyzstan Chubak azhi Jalilov (rahimahuLlah) gave an expert opinion in writing that the statements of Rashod Kamolov were true and consistent with Islam. Later, his sentence was reduced to 8 years.

Rashod Qori Kamolov has always been known as one of the few independent Islamic preachers in Central Asia. In his speeches, he spoke about the incompatibility of Islam and democracy, defended Islamic values and called on the population of the region to revive Islam. His sermons are popular not only among the residents of Kyrgyzstan, but also among the entire Uzbek-speaking population of neighboring countries.

It is noteworthy that the father of Rashod Kamolov, Muhammadrafik Qori, was also a well-known and respected imam who did not adjust to the policy of the authorities, always held an independent Islamic position, and was also accused by the authorities for supporting the ideas of Hizb ut Tahrir. In 2006, he was shot by a group of special forces of the State Committee for National Security of Kyrgyzstan, and according to eyewitnesses, this murder was a joint operation of the Uzbek and Kyrgyz special services.