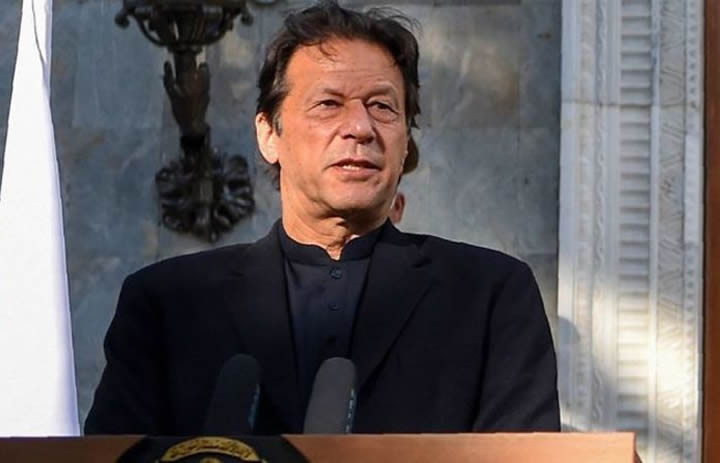 Women’s activists and human rights campaigners have accused Pakistan Prime Minister Imran Khan of “baffling ignorance” after he appeared to blame a significant rise in rape cases in the country to how women dress. In a recent TV interview, he acknowledged that incidents of rape of women have increased rapidly in the society and advised women to cover up to prevent temptation. The Prime Minister was slammed by various women’s organisations and on social media for victim-blaming. In the interview, the Pakistan leader also stated that the increase in rape indicated “consequences in any society where Fahisha (vulgarity) is on the rise,” and pointed to this being a product of India, the West and Hollywood movies. A GEO News investigation published in 2020, estimated that rape cases over the last 5 years in Pakistan could be as high 60,000. Last September, a mother was the victim of a horrific gang-rape in front of her children on the side of a highway outside the city of Lahore.

Comment:
The problem of sexual violence against women, including rape is at epidemic proportions within states east and west. In the UK, there are 85,000 victims of rape or attempted rape every year; equivalent to one every 5-6 minutes (Office for National Statistics). In the US, every 73 seconds someone is sexually assaulted – the majority women (National Sexual Assault Hotline). In South Africa, according to the latest annual crime statistics released by the South African Police Service, there is an average of 116 rapes reported to the police each day. India recorded 88 rape cases every day in 2019 according to data from the National Crime Records Bureau (NCRB).

The scale of this problem surely demonstrates that there is something integrally wrong with the culture and system within states globally today and the views and attitudes that are generated amongst men towards women within those societies. These views and attitudes are formed upon the prevalent values and beliefs within those states. That which dominates lands across the world today and is often promoted and celebrated when it comes to the relationship between men and women is the ‘Liberal’ concept of personal and sexual freedoms which promote the right of individuals to pursue and fulfil their desires as they wish, alongside generating a self-gratifying culture of just seeking pleasure, often at any cost. This is what is relentlessly promoted in movies, music, dramas, advertising, magazines, and other areas within liberal states. Furthermore, these liberal values and systems have allowed the systematic objectification and sexualisation of women and girls in the advertising, entertainment, gaming and even pornography industries which has cheapened the status of women for profit, and dehumanised them to mere objects to serve the desires of men. They have also caused the sexualisation of societies through the endless propagation of lewd images and thoughts, which has not only led to a situation where the sexual instinct of individuals is constantly triggered but has cheapened the relationship between men and women in society and harmed their cooperation. All this has created a dangerous environment for women and is the reason why anti-sexual harassment and rape laws within liberal states have proven ineffective in stemming the tide of these crimes. Liberal states believe that people can enjoy sexual freedoms without consequences upon the lives of women and girls, but this simply isn’t true, and the horrific scale of these crimes plaguing these states is proof enough. So, while Prime Minister Imran Khan links the rising levels of rape in Pakistan to the actions of individual women or the prevalence of Fahisha in the society, he ignores the fact that he is ruling over a secular liberal system which has actively imported and provided a platform for the propagation of the very values which have nurtured this vulgarity in behaviour and set the stage for the epidemic of violations against women’s dignity.

Creating healthy, respectful and safe relationships between men and women depends firstly on the value that societies afford to preserving the dignity of women. The weight, care and attention that Islam gives to this matter is unrivalled, placing it at the level of protecting life itself, and even defining a single word of slander against the honour of a woman as a grievous crime deserving of a severe punishment. The Prophet (saw) said:

“The best of you is he who is best to his family.” Furthermore, he (saw) illustrated the great status Islam affords to the protection of women, when he banished the whole tribe of Banu Qaynuqa from Madinah for dishonouring a single Muslim woman. Preventing these crimes against women also depends upon establishing the correct view within communities of the purpose of existence of the sexual instinct, which is for procreation and the continuation of the human race, and not the liberal view focussed on pleasure which wreaks havoc within states. This requires the implementation of a system which prevents the sexualization of women and society, and directs the triggering and fulfilment of the sexual instinct towards marriage alone which is both beneficial for society, and a means of preventing the fulfilment of desires in a manner which is harmful to others. The comprehensive Islamic Social System, which lays down a clear set of laws and principles which effectively regulate the relationship between men and women, provides a practical framework to achieve all this. Islamic laws such as the separation of the genders except for a need defined by the Shara, the obligation of men and women to lower their gaze to Awrah and avoid the look of lust to anyone except their spouse, the prohibition of a non-mahram man and woman to be alone together (Khulwa), the prescription of a specific dress-code for the woman which conceals her beauty, and the obligation to preserve chastity, are just some of the Islamic rulings which seek to create healthy cooperation between the genders and generate an environment where women can pursue the activities of public life in a productive and safe way.

All these Islamic principles, regulations and punishments will only be implemented correctly under the Islamic political system – the Khilafah based upon the method of the Prophethood. In the absence of this system, women in the Muslim lands, such as Pakistan, will never be safe!