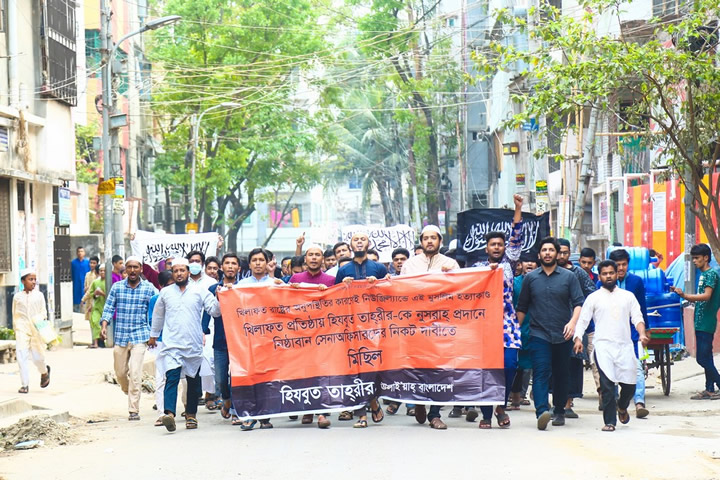 On the centenary of the destruction of the Khilafah State, Hizb ut Tahrir has launched a global campaign. As part of that, Hizb ut Tahrir / Wilayah Bangladesh has launched various activities from 1st Rajab 1442 Hijri, which will continue for the whole month. The activities were started with poster titled: “Centenary of the Destruction of the Khilafah (Rajab 1342 – 1442 Hijri); From a 100 Cities of the World Hizb ut Tahrir calls upon the Muslim Ummah: Establish the Khilafah”. Various important mosques, roads, lanes of Dhaka, Chittagong, Sylhet, Rajshahi, Khulna, Narayangonj, Comilla and important locations of Dhaka like the Press Club, Baitul Mukarram Mosque, Paltan, Motijeel, Shahbag, etc. were covered with posters.

From 16th February started the distribution of leaflets, titled: “RasulAllah (saw) said: “…then there will be a Khilafah on the Method of Prophethood”; Hizb ut Tahrir Calls Upon the Muslim Ummah! Join in the Work to establish the Khilafah to fulfill the Glad Tidings of RasulAllah (saw)”. Almost daily the activists of the party are doing collective distribution at various places of public gatherings. Among those the most notable activities, on 26th February, Friday after Jummah distribution of leaflets were done at based various important mosques in Dhaka and Chittagong city along with Baitul Muqarram (the central mosque) in Dhaka, where activists of the party boldly distributed leaflets among the people. The messages of the campaign, including stickers, memes, are also spreading through and through social and virtual media. Besides, a month long country wide interaction campaign has been declared to build awareness among the Muslims about the afflictions on the Muslim Ummah without the Khilafah and the duties of the Ummah for the way out.

In spite of the intimidation and threats of the “security forces” of the regime, the people are responding tremendously to these activities and interacting with the activists of the party enthusiastically. People are showing their solidarity in the activities after realizing the importance of the establishment of the Khilafah.

The messages of the activities are focused on four main themes, i.e. 1. The afflictions the Ummah has faced in the last 100 years after the demolition of the Khilafah; 2. Building awareness among the Ummah so that they are committed to fulfill their responsibility; 3. Unifying under the sincere leadership of Hizb ut Tahrir; 4. Working to fulfill the promise of Allah (swt) and the glad tidings of RasulAllah (saw).

O Muslims! The Khilafah (Caliphate) of the Muslim Ummah ruled for 1300 glorious years before being destroyed by the Kafir Colonialist Britain with the active collaboration of the traitor secular Kamal “Ataturk” in 1342 AH (1924 CE). By losing the Khilafah, the Ummah lost its honor, dignity, security and the shield to protect itself from its enemies. Whereas Allah (swt) made us the Ummah of “Wasat”, a just people that will be witnesses over other people. The Ummah lost its authority after the demolition of its Khilafah, and the West imposed on its necks the Ruwaibidha (foolish) agents, so the Ummah must regain its usurped power from them, and appoint a Khaleefah (Caliph) who takes care of its affairs with Islam. Hizb ut Tahrir under the leadership of the eminent scholar Sheikh Ata Bin Khalil Abu Al-Rastah, is working to re-establish the Khilafah on the Method of Prophethood. Hizb ut Tahrir is working among you for more than sixty years, and sacrificing self and the most precious for the sake of your revival and to take care of your affairs with Islam. In order to run the State with Islam, Hizb ut Tahrir have prepared the constitution (draft) of the Khilafah State on the basis of the Qur’an and Sunnah, and have highlighted the government and administrative structure in this.

Messenger (saw) gave the glad tiding for the return of the Khilafah on the method of Prophethood:

«ثُمَّ تَكُونُ خِلَافَةً عَلَى مِنْهَاجِ النُّبُوَّةِ» “…then there will be a Khilafah on the Method of Prophethood”. [Musnad Ahmed].

“Allah has promised those of you who believe and do good deeds that He will certainly make them successors in the land, as He did with those before them” [Surah An-Nur: 55]