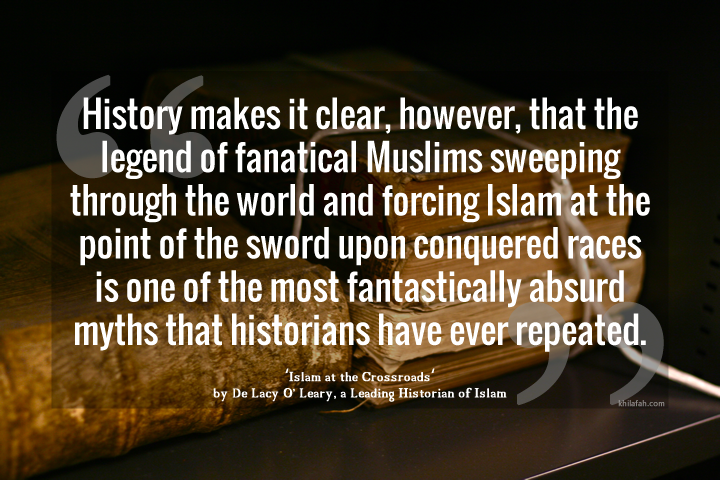 “History makes it clear, however, that the legend of fanatical Muslims sweeping through the world and forcing Islam at the point of the sword upon conquered races is one of the most fantastically absurd myths that historians have ever repeated.” [De Lacy O’ Leary, a Leading Historian of Islam, in his Book ‘Islam at the Crossroads.’]

• Islam came as a mercy for mankind and to lift oppression from nations. (وَمَا أَرْسَلْنَاكَ إِلا رَحْمَةً لِلْعَالَمِينَ) “We have sent you ‘O Prophet’ only as a mercy for the whole world.” [Al-Anbiya: 107] It also prohibits the forced conversion of people to its beliefs. (لَا إِكْرَاهَ فِي الدِّينِ قَد تَّبَيَّنَ الرُّشْدُ مِنَ الْغَيِّ)“There shall be no compulsion in (acceptance of) the religion. The right course had become clear from the wrong.” [Al-Baqara: 256] In addition, Islam prohibits the harming of innocents in war and obliges that the Khilafah and its army take all precautions to limit bloodshed when opening up lands to the rule of Islam.

“To begin with, there was no forced conversion, no choice between “Islam and the Sword”. Islamic law, following a clear Quranic principle (2:256), prohibited any such things: dhimmis [non-Muslim under Islamic rule] must be allowed to practice their religion.” [Michael Bonner, an authority on the history of early Islam in his book ‘Jihad in Islamic History’]

“He who kills a covenanted person (a non-Muslim citizen of the state) enjoying the oath of Allah and the oath of His Messenger, he shall not smell the scent of Paradise; its scent is found the distance of a forty year march.”

• In 8 A.H., the Prophet (saw) conquered Makkah without a battle, establishing the authority of Islam over the city and its inhabitants without bloodshed, despite its people having persecuted and even killed Muslims over a number of years. The Prophet (saw) showed unparalleled humility and mercy while dealing with those who were once hell-bent on exterminating him and his followers. He forgave them, saying,

“This is Muhammad who has come to you with a force you cannot resist. He who enters Abu Sufyan’s house is safe, and he who locks his door is safe, and he who enters the Masjid is safe.” Abu Sufyan was one of the leaders of the Quraysh who had played a central role in many of the wars and attacks against Islam. The Prophet (saw) also instructed his commanders to avoid fighting or shedding any blood unless they were forced to do so.

• The 1st Khalifah of Islam, Abu Bakr As-Siddiq (ra), instructed his soldiers with the limits of bloodshed during battle, saying: “Do not betray and do not exceed the limits, do not become treacherous, and do not mutilate dead bodies, do not kill a small child, nor an elderly, nor a woman, do not cut down or burn palm trees, and do not cut a fruiting tree, do not slaughter a sheep, nor a cow, nor a camel, unless you need to eat, you will pass by people who dedicated themselves to monasteries, leave them to that which they dedicated themselves to.”

• At the time of the Khilafah Rashidun, when Syria had fallen into the hands of the Muslims, the Roman Empire gathered a huge force to regain the region. Abu Ubaidah (ra) who was the military commander at the Syrian front could not be sure that he could guarantee the protection of the people of Syria from this attack, so he returned the Jizya to its Christian residents (a tax paid by the non-Muslim citizens of the state), saying, “We have returned your money to you because we have been informed of the gathering of the enemy troops. You people, according to the conditions stipulated in the contract, have obliged us to protect you. Since we are now unable to fulfill these conditions, we are returning your money to you.” The Christian citizens of Syria prayed for the Muslim commanders, saying, “May Allah help you to overcome your enemies and return you to us safely. If the enemy were in your place, they would never have returned anything to us, but rather they would have taken all our remaining property.” [Imam Tabari]

“Had the Muslims ill-treated the people of Syria or persecuted their religion, their position would have been desperate indeed: but their leniency towards the conquered and their justice and integrity presented a marked contrast to the tyranny and intolerance of the Romans …. The Syrian Christians enjoyed more civil and political liberty under their Arab invaders than they had done under the rule of Heraclius and they had no wish to return to their former state.” [‘Caliphate: Its Rise, Decline and Fall’ by Sir William Muir, Scottish Orientalist and colonial administrator who served as Lieutenant Governor of the North-West Provinces of India]

• When Sultan Salahudin Ayyubi liberated Jerusalem in 1187 CE from the Christian crusaders, he gave free pardon to the Christians living in the city, even though the crusaders had committed massacres against Muslims in Jerusalem when it was under their control. Only the combatants were imprisoned or asked to leave the city on a payment of nominal ransom. In most of the cases, the Sultan provided the ransom money from his own pocket and even provided them transport. A number of weeping Christian women carrying their children in their arms approached the Sultan and said, “You see us on foot, the wives, mothers and daughters of the warriors who are your prisoners; we are quitting forever this country; they aided us in our lives, in losing them we lose our last hope; if you give them to us, they can alleviate our miseries and we shall not be without support on earth”. The Sultan was highly moved with their appeal and set free their men. Those who left the city were allowed to carry all their possessions with them. The humane and benevolent behaviour of the Sultan with the defeated Christians of Jerusalem provides a striking contrast to the butchery of Muslims in this city at the hands of the Crusaders, 90 years before.

• “…the unbounded tolerance of the Arabs must also be taken into account. In religious matters they put pressure on no man…Christians preferred their rule to that of the Franks.” [Reinhart Dozy, an Authority on Early Islamic Spain, in his book ‘A History of Muslims in Spain’]

• Professor Thomas Arnold, the 19th century British historian, stated regarding the lands under Islamic rule, that Christians were happy and at peace with Islam to the point where they “called down blessings on the heads of the Muslims.” [T. W. Arnold, ‘Preaching of Islam’]