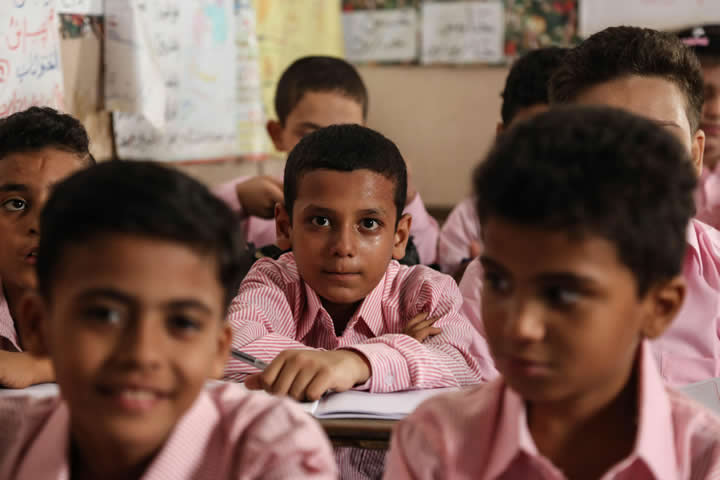 Egyptian President Abdel Fattah al-Sisi has ordered education officials to remove the verses from the textbooks of all other subjects, a Ministry of Education official revealed recently.

Comment:
In the light of the month of Rajab and the coinciding of the 100th hijri year of the fall of the Khilafah (Caliphate). The despotic measure, President Abdel Fattah al-Sisi and the Egyptian authority took, to detach the main source of the Deen (The Quran al Kareem) from education, by omitting texts of the Quran and the Hadith of the non-religious education curriculum, reminds us again that the cultural invasion that was started by the colonial powers before the fall of the Khilafah to detach the Muslims from their Deen continues in all its severity.

Back then it had the purpose to influence and pollute the Muslim minds in order to ensure the breakdown of their political unity by dismantling their power, al Khilafah. Now it is deployed to influence and pollute the Muslim mind in order to continue their fragmentation, and to prevent their political unity by the re-establishment of the Khilafah. The enmity of the usurping colonial powers and their agents in the Muslims lands against Islam and the Muslims did not change a bit. To put it in the words of the former British foreign secretary lord Curzon:

“We must put an end to anything which brings about any Islamic unity between the sons of the Muslims. The situation now is that Turkey is dead and will never rise again, because we have destroyed its moral strength, the Caliphate and Islam.”

The opponents of Islam in Egypt are vocal and clear in their distorted message. Freddy Elbaiady, a member of the Committee on Defence and National Security in the House of Representatives, openly claims that the texts of the Quran and the Hadith in non-religious textbooks are “dangerous”. He justifies this by arguing that these texts can lead for unqualified schoolteachers to misinterpret them.” Similarly, a large number of Egyptian secularists supports this idea and demand that the schools supervised by the Ministry of Education should offer purely secular education. And Egypt’s former Minister of Culture Gaber Asfour even once called for the elimination of religious education and religious schools altogether.

While this can openly be said in a majority Muslim country the stance of the so-called Salafist al-Nour Party is to say the least, very weak. Their plea not to remove these verses of the curricula is because it will weaken the education program and especially the Arabic language! While there is a head-on confrontation with the Quran and Ahadith. And by going along the state’s false narrative that these Islamic texts could be misinterpreted. As Salah Abdel Maaboud, a senior member of the al-Nour party has said: “Educational authorities can easily solve the problem of misinterpreting religious texts by committing schoolteachers to specific interpretations.” As if the enemies of Islam are concerned with the misinterpretation of religious texts and want a correct understanding of it. Isn’t clear yet that they are the ones who misinterpret the Islamic texts, disregard it or omit it to suit their interests? The Egyptian authorities have also been clear about the education policy that it will allow only “moderate” schoolteachers. So which schoolteachers and which specific interpretations the al-Nour Party is calling for?

More worrisome is that inside the religious establishment of the esteemed al-Azhar supports such ideas, including the Islamic Research Academy, the decision-making body of al-Azhar. Al-Azhar, which owns thousands of schools and a university that has branches in several Egyptian provinces, says it is revising the curricula of its schools and colleges to remove content it deems problematic.

Knowing the deliberate and evil preconceived plan whereby Muslims are deceived and mislead, how is it possible that these Muslim organisations don’t take a strong Islamic stance in the everlasting struggle between Haqq and Batil? While the common men in the noble Ummah can see this attack against Islam and is willing to oppose it.
Beside all this, not only some the texts of the Quran and the Sunnah are in queue to be banned next from schools. The Quran and the Sunnah as whole has been detached from life’s affair except for some rituals.

If these organisations choose the contentment of these kind of tyrannical regimes above the confrontation against Batil and struggle for Haqq then they should step aside and stop leading the Ummah by claiming authority on them. Till they speak and act only according what Allah (swt). Pleases, are clear in their Islamic stance without compromising the Deen, and work to re-establish al Khilafah so that the Ummah can rule by which Allah (swt) has send down.

“…Therefore, fear not men but fear Me (O Jews) and sell not My Verses for a miserable price. And whosoever does not judge by what Allah has revealed, such are the Kafirun”