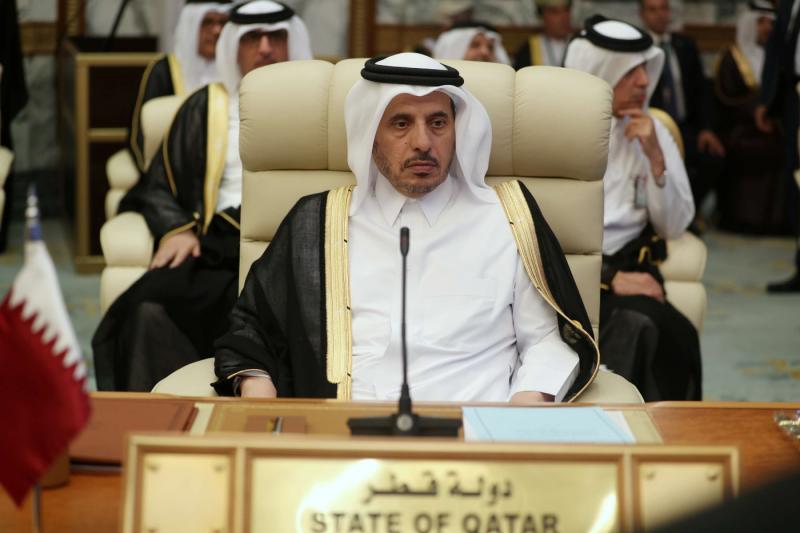 Qatar said on Sunday it had reservations about hardline statements on Iran made at emergency summits in Mecca organised by Saudi Arabia.

“The statements condemned Iran but did not refer to a moderate policy to speak with Tehran,” Sheikh Mohammed bin Abdulrahman Al Thani, Qatar’s foreign minister, told Al Jazeera. The summits “adopted Washington’s policy towards Iran and not one that takes the neighbourhood into consideration”, he added.

He questioned the unity called for by neighbouring countries amid an ongoing blockade against the Gulf country. “The Gulf summit statement talked about a unified Gulf, but where is it amid the continuation of Qatar’s blockade?” he said.

Whilst our leaders held a conference in Makkah in the last 10 days of Ramadhan, ultra-nationalist Jews invaded our masjid in Al Aqsa, continuing to humiliate and terrorise us. Our enemies declare their hatred for Islam openly and threaten to invade our lands. What was this Makkah Summit actually about? Whose interest does it progress?

Apart from applying the usual political lipstick to legitimise themselves before 1.8bn Muslims, tragically this was no ‘summit’ regarding this issue of the Ummah. It was a conference focused on safeguarding the ‘thrones’ of these traitors, whilst dividing and weakening us still further. In the end days of this blessed month of Ramadan, they worked hard, through the thirst of Ramadhan, making qiyam, du’a and sujud to the foreign policies of their masters America and the Zionist regime. They forget Allah ‘s(swt) warning: وَإِذَا قِيلَ لَهُمْ لَا تُفْسِدُوا فِي الْأَرْضِ قَالُوا إِنَّمَا نَحْنُ مُصْلِحُونَ * أَلَا إِنَّهُمْ هُمُ الْمُفْسِدُونَ وَلَٰكِن لَّا يَشْعُرُونَ “And when it is said to them, “Do not cause corruption on the earth,” they say, “We are but reformers. Unquestionably, it is they who are the corrupters, but they perceive [it] not.” [Al Baqarah 11-12]

The leaders and governments in our countries have failed the Ummah. They are literally killing us, dividing and weakening us, and allowing the kuffar to bring corruption upon our lands.

Where was the conference against the threat to our lands this Ramadhan? Where was the ideological ‘summit’ of our true leaders, on the actual method, and political, physical actions toward returning to the rule of Islam, the way Allah (swt) and His Messenger ﷺ meant it to be?  Where are the plans to unite us once more and take us to the safety, peace and justice of Islam?

The ruling structure, governance and leadership of Islam are unique and are duty bound to look after the affairs and well-being, not only of Muslims, but all of mankind. Consequently Islam would stand in the way of any person or entity that would harm, oppress or cause mischief on earth.

Islam protects the people from the designs of foreign states who covet our wealth and lands. The kuffar worked hard to colonise us. We have seen the long history of their political machinations to divide and conquer, and how they selected and carefully placed their agents, our so-called leaders above us to keep Islam from being implemented and thus we are divided and enslaved. It is no surprise therefore that interested parties and their puppets fight and oppose Islam. They are descendants of agents and traitors. Western countries occasionally make sympathetic noises, but their mantra of ‘human rights’ goes silent when their puppets imprison, torture and kill Muslims calling for the return of Islam.

Our salvation is not to be found with them nor the kuffur and taghut of secularism whether liberal capitalism or fascist.

At the end of this Ramadhan, we need to turn away from kuffur and its misguidance and those who champion it toward the Qiblah of Islam. There needs to be a complete and total revolution of thinking. Islam provides the path to implementing Islam – through the Sunnah of the Prophet ﷺ. Let it be the last Ramadhan that we allow ourselves to be divided and enslaved.

The traitors and our enemies know their time is ending, and that the return of Islam is inevitable. The Prophet ﷺ has given us the good hope when he said,