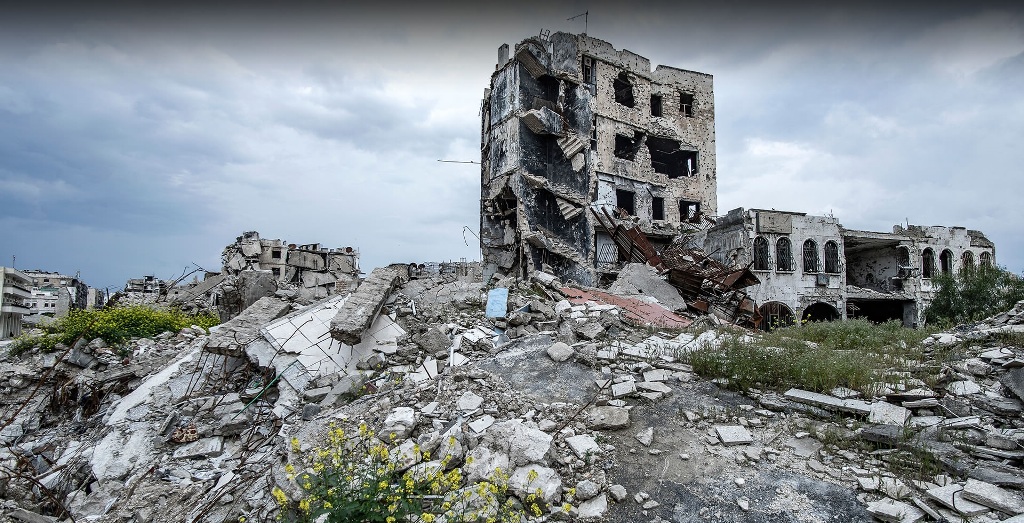 The criminal and vicious Russian regime’s aircrafts still carry out hundreds of air strikes throwing thousands of bombs and missiles according to their scorched earth policy, trying to advance their forces to control the northern countryside of Hama and southern countryside of Idlib. Despite this, the people are resisting with all their simple means, making their advancement difficult. There are hit and run activity in some areas and exchange of control over them!

The events we are witnessing on the ground have confirmed facts that everyone has already realized, which we have emphasized previously. We will remind our brothers and our people at this decisive period of Ash-Sham’s revolution in which the attack of the enemies has intensified.

The weakness of the criminal regime forces and the low morale of its soldiers and their inability to confront and win the battles on the ground have become apparent despite the mobilization of its ground and air forces and increase in live fires. Was it not for international assistance with the planning of America and Russia, and direct regional support from Iran and its followers, and the open Turkish silence and consent or behind the scenes … and those deadly effects of the conferences and negotiations in Astana and Sochi and their sisters that led the factions to indulge in misguidance! Otherwise, the criminal regime would have been destroyed a long time ago.

Thus, the criminal regime did not take over the liberated areas because of its strength and superiority, but rather because of the international and regional support, and the traps of negotiations and conferences, that the Kaffir West and those conspiring with it from the countries of the region used to deceive the leaders of the factions and impose these traps on them. The regime has gained more through these conferences and negotiations than what they gained militarily! What made it easy for the regime is that the leaders of the factions were deceived by the promises of the guarantors and their attachment to the supporters and their commitment to the red lines they have decided. Therefore, it is necessary to cut the links of supporters and those of the states conspiring against the revolution, and to hold tight to the strong rope of Allah and trust in Him (swt) alone, and we are confident that He (swt) will fulfil His promise to His sincere worshippers of victory and empowerment. إِنَّا لَنَنصُرُ رُسُلَنَا وَالَّذِينَ آمَنُوا فِي الْحَيَاةِ الدُّنْيَا وَيَوْمَ يَقُومُ الْأَشْهَادُ “Indeed, We will support Our messengers and those who believe during the life of this world and on the Day when the witnesses will stand” [Ghafir: 51].

It is no secret that the decisions of all the conferences from Geneva to Sochi are to restore the international legitimacy to the agent regime in Damascus and to eliminate the revolution of Ash-Sham and the sincere of its sons by derailing its path and taming its supporters and bringing desperation and despair to the souls of the supporters. But how can this be when the supporters of the revolution have sacrificed and tolerated a lot and suffered displacement and killing and destruction of houses and villages? It is a duty to adhere to the strong rope of Allah and to stand in the face of the plots against it, and despair must not find a way to it, but it must continue steadfastly on the Truth that it moved for, and to surround the sincere of its sons and renounce from its ranks all collaborators with the colonial Kuffar and their agents.

The duty is to proceed with insight and adhere to the project that pleases our Lord and stems from our creed “the project of the Khilafah (Caliphate) on the method of Prophethood” which must be established on the ruins of the Kufr regime, repression and criminality in order to please our Lord for the support of His Deen and the establishment of His state and to raise the banner of “no god but Allah and Muhammad is His Messenger” high over the blessed land of Ash-Sham وَيَوْمَئِذٍ يَفْرَحُ الْمُؤْمِنُونَ * بِنَصْرِ اللَّهِ يَنصُرُ مَن يَشَاءُ وَهُوَ الْعَزِيزُ الرَّحِيمُ “And that day the believers will rejoice * In the victory of Allah. He gives victory to whom He wills, and He is the Exalted in Might, the Merciful” [Ar-Rum: 4-5].

Your brothers in Hizb ut Tahrir, the leader who does not lie to his people, and carrying its duty obliged by Allah (swt) to work for the resumption of Islamic life according to the method of the Prophet ﷺ and exposes the plans of the Kufr and conspiring countries and their hatred of Islam and Muslims in general and the sincere of the people of Ash-Sham in particular: Your brothers advise and warn you against the machinations of our enemies and their conspiracies against us, and we invite you to work with us and support the project of the second Khilafah Rashida (Righteous Khilafah) on the method of Prophethood, in that is our success and our survival and our lives in this world and the Hereafter.

“O you who have believed, respond to Allah and to the Messenger when he calls you to that which gives you life. And know that Allah intervenes between a man and his heart and that to Him you will be gathered,” [Al-Anfal: 24]