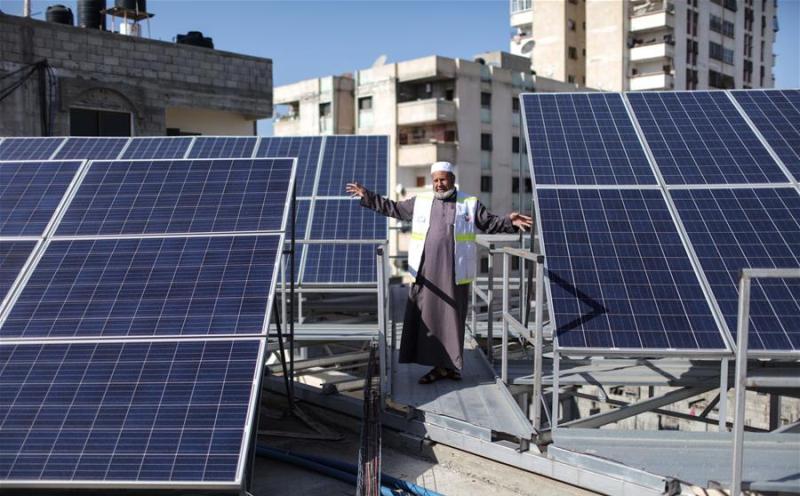 Assalm Alaikum Wa Rahmatullah Wa Barakatuh, May Allah protect, aid, and grant victory to you our Ameer and Sheikh,

Our honourable Sheikh, I have an urgent question, if you please. We need the answer to know how to deal with the issue that we were notified will take place.

The issue is that there is an ongoing project to build solar panels for electricity on platforms. They want to carry out this project as a result of the electricity crisis experienced by Yatta city in Al-Khalil (Hebron), but what I want to ask about specifically is that they want to erect these panels over a land area of 15 dunums over old and new graves. Is it permissible to place these panels on this cemetery and next to the graves and on platforms that cover the graves from the top?

The Prophet ﷺ explained that graveyards are sacred, so it is forbidden to unearth them or to sit on them or to carry out any form of actions that violate the sanctity or respect of the graveyards, and some of the evidences for this are:

1- Abu Dawud extracted from Ayisha (ra) that the Prophet ﷺ said:«كَسْرُ عَظْمِ الْمَيِّتِ كَكَسْرِهِ حَيّاً» “Breaking the bones of the deceased is, in sin, like breaking his bones when he is alive.”

In “Awn Al-Ma’boud Sharh Sunan Abi Daud”: Al-Suyuti said in the explanation of the revelation of the Hadith, from Jabir (ra) that he said: we joined the Prophet in a Jinaza. The Prophet ﷺ sat on the edge of a grave, and we sat with him. A grave digger took out a piece of bone (of an arm or leg) and he was about to break it, then, the Prophet ﷺ said: «لَا تَكْسِرْهَا فَإِنَّ كَسْرَكَ إِيَّاهُ مَيِّتاً كَكَسْرِكَ إِيَّاهُ حَيّاً وَلَكِنْ دُسَّهُ فِي جَانِبِ الْقَبْرِ» “Do not break it. Breaking the bones of the deceased is like breaking his bones when he is alive, so bury it by the side of the grave.”

That is, if the bone is still present then it must be preserved and kept in the sand/ground.

Thus, exhuming of the Muslims’ graves is not permissible unless the bones have disintegrated, and became like the sand, then it is permissible to plant and build on it, and carry out other permissible acts over them. However, if the bone is present, it is not permissible to exhume the graves or build on them or perform other acts except in special cases related to the deceased or so (as the texts have shown). As to how much time it takes to know that the deceased has disintegrated or not, it is decided by the experts and after understanding the reality in question (Tahqeeq Al-Manat).

2- There is no dispute among the fuqaha that sitting on graves to urinate or excrete is forbidden. And they differed as to whether or not to do otherwise. In the Kuwait Encyclopedia of Fiqh:

(The Hanafis, and that is their thought, the Shaafa’is and Hanbalis said that it is disliked (makrooh) to sit on the graves, because Abu Marthad al-Ghannawi narrated that “the Prophet ﷺ said: «لاَ تَجْلِسُوا عَلَى الْقُبُورِ وَلاَ تُصَلُّوا إِلَيْهَا». “Do not sit on the graves and do not pray facing towards them”.

Abu Huraira (ra) said: the Prophet ﷺ said: «لأَنْ يَجْلِسَ أَحَدُكُمْ عَلَى جَمْرَةٍ فَتُحْرِقَ ثِيَابَهُ فَتَخْلُصَ إِلَى جِلْدِهِ خَيْرٌ لَهُ مِنْ أَنْ يَجْلِسَ عَلَى قَبْرٍ». “It is better that one of you should sit on live coals which would burn his clothing and come in contact with his skin than that he should sit on a grave”.

The Hanafi’s and Shafi’is said: “if he wished to sit during the visit to the grave, he sits far or near according to the status of the deceased in his life.” The Shafi’i said: “The visitor must come closer to the grave just as he used to get close to owner of the grave when he was alive during his visit.”

Al-Tahawi from the Hanafis, and it is narrated that Abu Hanifah, Abu Yusuf and Muhammad all say that it is allowed to sit on the grave. This is what the Malikis also said based on the narration that Ali (ra) used to sit on the grave and lean on it. Al-Tahaawi said: It is no longer disliked (Makrooh), if sitting is for recitation).

3 -If a project is to build solar panels for electricity on platforms on the 15 dunums of land of old and new graves, the following should be considered:

Can they be erected without trampling on graves or damaging or exhuming them or having the presence of bones, especially the old graves? I doubt it, but if you say that we will make sure that we do not trample on any grave and that no pillar will fall on any grave in the new cemetery, to say that for the new graves because they are visible, is correct, and people can move away from them. The old graves are not visible, how will they ensure not trampling over them and so on?

Therefore, in order to avoid haram or at least the makrooh, keep away from the graves and look for another place and Allah knows best.

The link to the answer on the Ameer’s Facebook page:

The link to the answer on the Ameer’s Google Plus page: