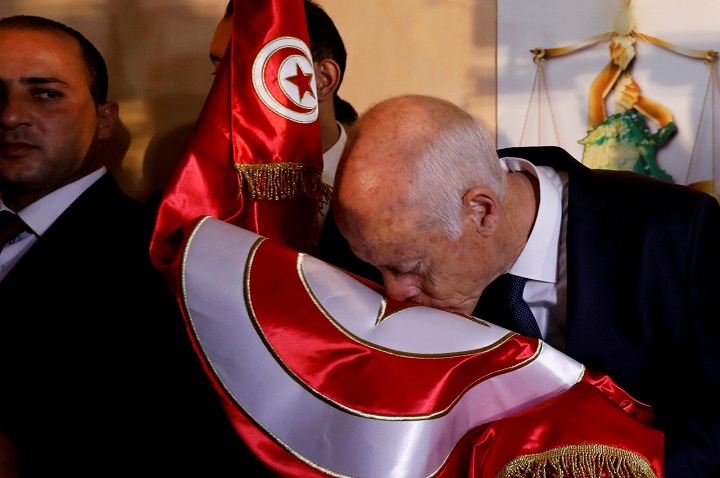 In light of international and regional interventions to influence the Tunisian political scene, especially after the decisions of 25th July 2021, President Kais Saied reiterated his independence at the Carthage Palace on Thursday, 19th August 2021, saying, “These people who talk about the decisions I take based on illusory balances in their heads because they live only on illusions, I make them (decisions) based on my convictions, based on responding to the demands of the Tunisian people, and no one interferes in them, because I will not be held hostage by anyone.”

We in Hizb ut Tahrir are aware that President Kais Saied began his rule being independent in decision-making, but he was soon influenced by the political milieu that glorifies the West and recognizes its dominance over the country and the need to obtain its support and dependence on it. So, he shifted his orientation and fell into the arms of France, which supported him with some of its allies until he was able to control the government and overthrow his opponents, Britain’s agents, on 25 July 2021, after activating and interpreting Chapter 80 to move towards changing the form of government from semi-parliamentary to presidential. We remind President Kais Saied about some of the demands of the Tunisian people and some decisions that translate the independence of the political decision, perhaps he will show his sincerity in what he claims and make up for what he missed:

1. On 17th December 2010, the Tunisian people demanded the overthrow of the secular Western system that caused misery, suffering, corruption and nepotism, and to replace it with a new system that would achieve justice and decent life and liberate the country from the influence of the colonial West. The overthrow of the Western system and the disengagement from the shackles of the international community which is the root of calamity, can only be achieved by Islam within the framework of a political project that crosses political, national and regional borders, whereas, continuing to guard the secular system is a distraction for the Tunisian people from achieving the goals of their glorious revolution for the radical change, and a reproduction of the same regime against which the people revolted.

2. Disengaging from the colonial countries and their financial institutions, refusing to respond to international pressures, and refusing international aid and loans from their banks, which plunged the country into debt and mortgaged its political decision. As freedom from the influence of the colonial West is the first step to regaining the authority and owning the decision.

3. The Tunisian people demanded the return of wealth from the looting colonial companies in the Wino Petrol campaign. They also demanded the abolition of contracts that made our wealth plundered by the Kuffar, and demanded the restoration of their sovereignty over their entire soil, complete and undiminished.

4. Cancellation of military agreements with the greedy colonial countries in our country, especially the agreement that made Tunisia a major ally of America from outside NATO, and which made Tunisia an advanced base for the American army AFRICOM in Africa, because these agreements affect the country’s sovereignty and deepen foreign influence.

5. Stop the blatant interference of foreign ambassadors in the minute details of political life and prevent their recruitment of politicians and civil society organizations.

6. Cancellation of the agreement with the Francophone Organization, which made Tunisia an advanced base for the most important pillars of the intellectual invasion in North Africa.

7. Abolishing the independence of the Central Bank imposed by Europe and the International Monetary Fund on Tunisia.

This is the tip of the iceberg of what President Kais Saied can do to show the extent of his sincerity in what he claims of the independence of his political decision, and we know that the difference between what he is in now and what we are calling him to is a major matter, but the transition between them is easy for the one who Allah (swt) makes it easy for him, and for the one who fulfilled its only one condition, which is the sincerity of the intention to Allah Almighty, and the good reliance on Him. And we remind you of the saying of Al-Faruq Omar, may Allah be pleased with him, who you consider to be your example: “Verily, Allah honored us with Islam. If we seek honor from anything besides that with which Allah has honored us, then Allah will disgrace us”.

“O you who have believed, if you support Allah, He will support you and plant firmly your feet.” [Muhammad: 7].