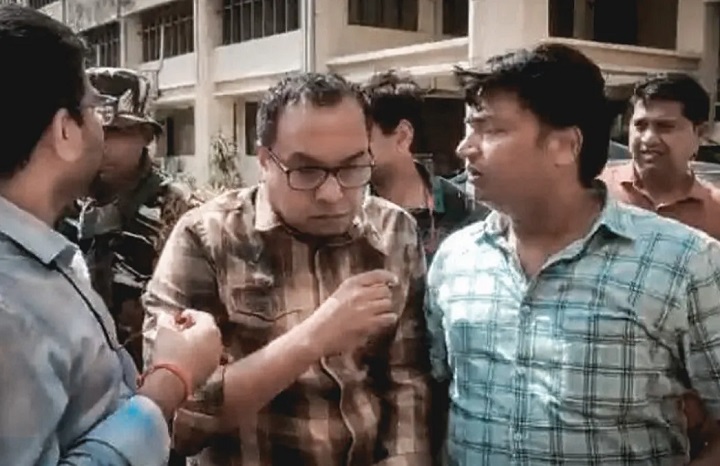 Bangladesh’s fugitive scammer Prashanta Kumar Halder, also known as P.K. Halder, is arrested in India’s West Bengal on May 14, 2022 by the Enforcement Directorate of India. The notorious P.K. Halder was a top banker (former Managing Director of NRB Global Bank) and wanted in Bangladesh for swindling over at least Taka 102 billion (US $12.03 billion) from different non-bank financial institutions (NBFIs) and amassing illegal properties in Bangladesh while laundering the rest to Canada, Singapore, and India. P.K. Halder is part and parcel of the Hasina regime as well as the secular ruling system it is based upon. Halder was a man closely connected with the Hasina regime and thus could manage to secure top executive posts in a number of financial institutions to serve the interests of the venal politicians in less than a decade. Otherwise, how could he escape to India despite the High Court ban! And his extradition to Bangladesh and subsequent trial would be an impunity for not returning the looted money since already Hasina’s minister and Anti-Corruption Commission admitted that his arrest will unlikely lead to returning of people’s money. Thus in spite of the media’s sensationalism, people are not happy as they know that Halder will eventually be free through the secular legal process.

O People! There have been many such P.K. Halders who worked for the regime and conducted the biggest bank scams one after another in the last 10-12 years. You witness the Taka 45 billion BASIC Bank looting, while its key mastermind Sheikh Abdul Hye Bacchu, the bank’s former chairman, remains untouched to date and was not troubled at all by the ACC due to his strong ties with Sheikh Hasina. You saw Hallmark Group’s Taka 43.57 billion robbing from the state-owned Sonali Bank, Taka 34.43 billion looted by Crescent Group from Janata Bank, and Bismillah Group’s stealing of Taka 12 billion from four banks. The series of billion dollar bank looting has now made the people indifferent to the news of Taka 100 or Taka 1 billion scams, which are going on unabated within the legal framework. For the bloodsucking secular capitalist Hasina regime, even these thousand-crore scams are no big news. Hasina government’s formidable(!) former Finance Minister AMA Muhith, the architect of Hasina government’s ‘Mega Development’, said after the notorious Hallmark-Sonali Bank loan scam that the Taka 30 billion to Taka 40 billion loan fraud is not a big deal for our economy! In fact, people came to their senses about this systematic bank looting when one of the country’s biggest bank loan defaulters Salman F Rahman, who was imprisoned for fraud in 2007-8, was appointed as an economic adviser to Prime Minister Sheikh Hasina a few years back, and is now a cabinet minister. Hasina government here pursues a twofold strategy to keep the corruption on. It selectively goes after the small-fry but keeps the looting program running by letting the kingpins go free. But PK Halder and his likes are also rewarded by crony capitalism for their great sacrifice in this gamble. He knows that his arrest is in fact an immunity for him to escape with his vast fortunes unscathed. Eventually, he will come out of jail without any liability for returning the looted money.

O People! Although “zero-tolerant” Hasina regime is already a champion in corruption, the rest of the other secular regimes and political parties are also no exception. Because corruption is embodied in the creed of secularism, it lacks moral standard and generates material greed in every human, let alone the corrupt elites. Thus, corruption is phenomenal amongst capitalist elites and secular politicians of not only in Bangladesh but also across the globe.

O Muslims of Bangladesh! Do not tolerate this system that feeds the corrupt to loot your money and resources further. Do not be deceived by the arrest of tiny pawns like P.K. Halder as their arrests do not guarantee the return of your looted money. When the problem is the secular capitalist system itself, how can you seek the solution from it? To end corruption, you must rise up to abolish the evil capitalist system and bring back the promised Khilafah Rashidah (rightly-guided Caliphate) on the method of Prophethood. There will be no room for special treatment of elites in the Khilafah, and neither will the frauds and corrupts find there any way to thrive. Islamic shariah never spares the elites for their corruption, rather gives comfort to the poor by suspending punishments during any time of crisis. RasulAllah (saw) ordered to cut off the hand of an elite Makhzumi woman of the Quraish for theft, whereas he (saw) said that «لَا قَطْعَ فِي مَجَاعَةِ مُضْطَرٍّ» “there is no cutting in the compelling famine” (reported by al-Sharkhasi in al-Mabsut) to give respite to the poor and needy. So, join the political struggle to re-establish the Khilafah Rashidah under the leadership of Hizb ut Tahrir to ensure equity and prevent people from being seduced into increasing their wealth through theft or fraud.