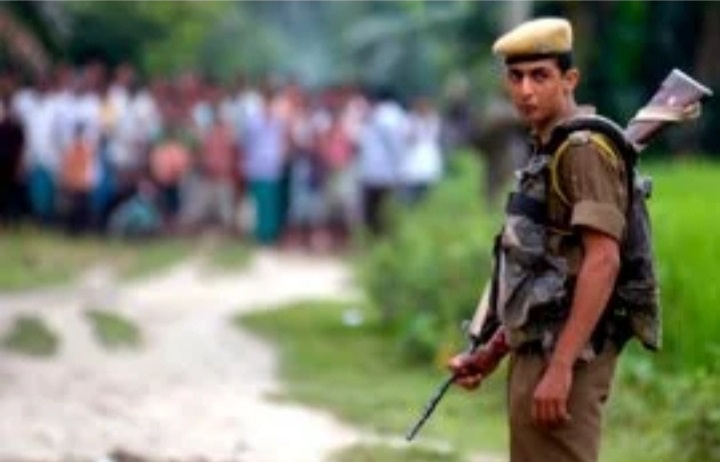 A video of a photographer stomping and attacking the body of a man shot by the police in the northeastern state of Assam has gone viral in India, triggering uproar and protests. In the video, a man identified as Moinul Haque rushed to attack the mob of Assam police with a stick and was shot instantaneously at the chest followed by dozens of police attacking him with batons, where a photographer stomped and attacked the body violently. (The Hindu).

Comment:
The incident resulted from the forced eviction of 800 Bengali-speaking Muslims from their lands, and their shanties were destroyed by the government officials in Sipajhar, Assam, despite monsoon rains in the region. The photographer was arrested shortly for his repeated stomping of a dead person as if he is the only blame of the incident. What protocols did the officers follow to fire on the chest of a lone person who came running with just a stick against an armed police?! What made the photographer become so arrogant in violently hitting the dead person repeatedly?!

The incident evidently portrays the rotten nature of Asabiyya (Tribalism, Nationalism, and Sectarianism) that can give no goodness to humanity. People divide themselves because of the lands that actually belong to Allah; set borders between them and fight for their superiority and ownership of those lands. This makes them exceed all the limits, commit crimes and oppression, evict peoples from their own lands until the whole earth is filled with corruption true to the sayings of the Prophet (saw): «دَعُوهَا فَإِنَّهَا مُنْتِنَةٌ» “Leave it (i.e. asabiyya). It is rotten”.

The incident also evidently portrays the nature of political parties in democratic systems who run the hate campaign against particular communities for their vote banks that made officials and civilians to harass and kill the weak. This also shows fallacy of man-made system (i.e., democracy) which paves the way for majoritarian rule to oppress the other communities living under their authority. The BJP-led Assamese government exploits the sectarianism for the electoral gains which led them to run the eviction programs against the weak. This is a total shame to Adam’s children who cling to sectarianism and hatred, making them kill innocents brutally.

“Because of that, We decreed upon the Children of Israel that whoever kills a soul unless for a soul or for corruption [done] in the land – it is as if he had slain mankind entirely.” [TMQ 5:32].

The incident also evidently glimpses the true nature of today’s reality without the presence of Khalifah (Caliphate) upon the earth. The earth belongs to Allah and it is only His laws that can effectively govern the world without corruption, chaos and discrimination true to the saying of Allah (swt):

“And [mention, O Muhammad], when your Lord said to the angels, “Indeed, I will make upon the earth a successive authority.” They said, “Will You place upon it one who causes corruption therein and sheds blood, while we declare Your praise and sanctify You?” Allah said, “Indeed, I know that which you do not know.” [TMQ 2:30].

Otherwise, the earth would be filled with corruption, where the strong would eventually dominate the weak, expelling and slaying them with their bigotry laws as glimpsed by this incident where the photographer is only blamed, not the officers and not the system that drives the people into sectarianism.

The incident reminds the Muslim Ummah its dire need and obligation to establish Khilafah in the Muslim world that would showcase and teach west and east the true model to protect and safeguard the mankind with the just laws of Islam where no one can oppress the other unjustly as it happens in the largest democracy in the world.

“And do not kill anyone which Allah has forbidden, except for a just cause. And whoever is killed (intentionally with hostility and oppression and not by mistake), We have given his heir the authority [to demand Qisas]. But let him not exceed limits in the matter of taking life (i.e. he should not kill except the killer only). Verily, he is helped (by the Islamic law).” [TMQ:17:33]

The history of humankind had been witnessing the oppression of man made systems for centuries be it Romans, Persians, Egyptians, or Indian civilization. The colonial and post-colonial model of democracy and communism aren’t exceptions for such oppression. The true liberation for mankind from oppression of another man is possible only under the system sent by the Creator via revelation and it is we the Ummah of Prophet Muhammad (saw) that shall establish the model and alleviate the problem of oppression.