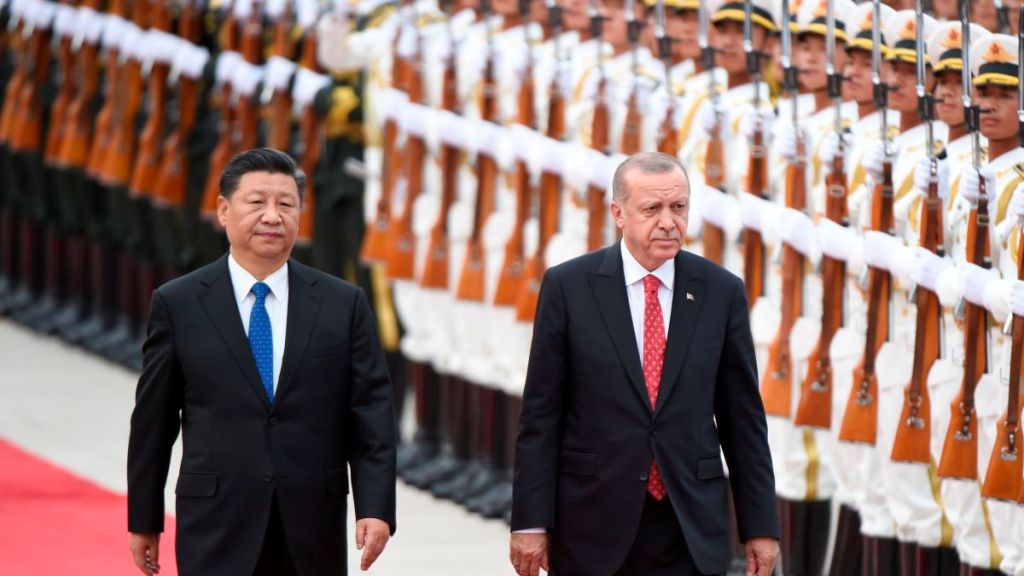 Beijing has ratified an extradition treaty with Turkey that human rights groups warn could endanger Uighur families and activists fleeing persecution by Chinese authorities if it is adopted by Ankara.

The treaty, signed in 2017, was formalized at the weekend at the National People’s Congress, with state media saying it would be used for counter-terrorism purposes. Facing strong opposition within its parliament, Turkey’s government has not yet ratified the deal, and critics have urged the government to abandon it and prevent the treaty from “becoming an instrument of persecution”. (Guardian News 29/12/2020)

The world is getting tighter and tighter, strangling the Ummah and those that are the weakest!

The Uighurs who are able to flee the oppression of internment camps where it is reported that they are being re-educated to conform the Chinese way of life, or those who are forced to eat pork, drink alcohol, marry non-Muslim Chinese and chant communist Chinese anthems are also being chased at any place of refuge and forcibly returned to China. The list of the crimes against the Uighurs has led to human rights activists labeling their treatment as genocide.

An estimated 50,000 Uighurs have fled to Turkey, making it the largest community of Uighur diaspora in the world. But this safety of this refuge is constantly threatened.

In 2019, Erdogan had said people in Xinjiang are living happily. Deluded and in denial just like every Muslim ruler! It was reported that Beijing sends requests to the Turkish government to extradite Uighurs after identifying them, then Turkey sends them to a third country and from there China can secure their extradition.

The incentive to assist China is clear. In 2010, China and Turkey had signed eight strategic cooperative pacts. In 2019, China’s central bank made a $1 billion cash infusion into the Turkish economy with banks receiving bailouts from China. Beijing has also sanctioned a $3.6 billion package for Turkey’s energy sector.

While the sincere Muslims raise their voices in protest and non-Muslims are calling China out, it is the Muslim rulers globally who do not fail in their worship or obedience of the ones who give them money and buy their silence and compliance.

The false borders that keep us apart and allow us to see one Muslim as a foreigner that can be ‘returned’ to ‘his land’ are being used to justify the actions of adding oppression upon oppression to the Uighurs. Arslan Hidayet, an Australian Uighur activist who lives in Istanbul said: “We have been sold out by our own, despite the ethnic and religious ties we have, which is very hurtful.” Above the ethnic ties, is the right and responsibility of one Muslim towards another. This bond should never be violated!

The Ummah is truly crying out at these crimes and also feeling helpless at the compliance of Muslim rulers with China in its bid to eradicate the Uighurs.

It is time to remove this sense of helplessness and take action to work for change, the first and foremost, to remove the agent rulers and replace them and the systems that support them.

Today, the rulers’ silence is only broken by nonsensical claims of everything being ok, while taking bribes and favors with no shame or decency!

Allah (swt) sends a most stark warning, and His Words are the Truth – وَلاَ تَرْكَنُواْ إِلَى الَّذِينَ ظَلَمُواْ فَتَمَسَّكُمُ النَّارُ وَمَا لَكُم مِّن دُونِ اللّهِ مِنْ أَوْلِيَاء ثُمَّ لاَ تُنصَرُونَ “And do not be inclined to the oppressors or you will be touched by the Fire. For then you would have no protectors other than Allah, nor would you be helped.” [Surah Al Hud Verse 113].