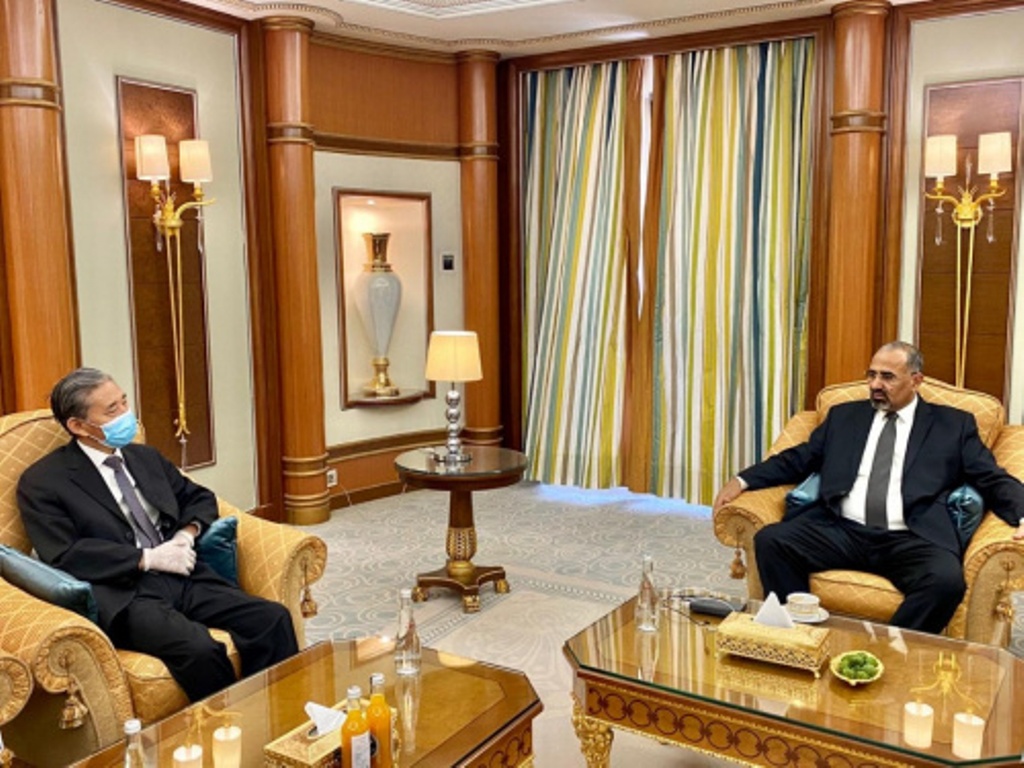 On Tuesday, 22/12/2020, the President of the Southern Transitional Council, Aidaroos Al-Zubaidi, received in Riyadh the Chinese ambassador to Yemen, Kang Yong. During the meeting, they discussed support for the economy and public services in Yemen from China. (Alomanaa Newspaper 24/12/2020)

China’s view of Yemen and the region is a colonial view, as it has become apparent that it has a chance to lay its hand on the port of Aden under the pretext of its development and management, which began with Abd Rabbo Hadi’s visit to China in November 2013, and his invitation to it in March 2015 to implement the agreement concluded between the two countries to develop and operate the port of Aden, and the recent renewal of the invitation to it in March 2018. This is what made Aidaroos al-Zubaidi join Hadi as his potential heir to meet the Chinese ambassador, who had nothing in his mind except to register his political presence, just like the politicians who ruled Yemen from the sixties until today.

What drives China to (take over) the port of Aden is the strategic location of Bab al-Mandab overlooking the Red Sea, the Arabian Sea and the Indian Ocean, for Chinese products coming from the east towards the Middle East region, as a transit point for their products that will land in Gwadar Port in Pakistan and then they pass and are distributed in the region.

China is also relying on the abundance of its cheap products, which the markets of Yemen and the region as well have opened up for them, because of the cheap Chinese labour and the great increase in its economic growth. The presence of China brings a green light from both sides of the real conflict in the region; Britain wants China to be by its side in the face of America, while America wants China to confront Islam in the oil-flooded region, in light of China’s increasing need for oil and its desire to obtain a large share of the lost oil in light of the bad political conditions that Yemen is going through (that China will not obtain anything similar under different circumstances).

Indeed, betrayal is that Al-Zubaidi sits with the Chinese ambassador and shakes hands with him in Riyadh near Makkah and the hand of the Chinese ambassador is stained with the blood of the Uyghur Muslims in East Turkestan. It is the attribute of the of the Ruwaibidha (ignorant) rulers of Muslims who open Muslim countries to more investments by the colonizers in Muslim countries, and enable them to control the joints of governance, economy and so on, since the sun of the Khilafah (Caliphate) was absent from the world. The most offensive is the position of the rulers, we find the Al Saud regime, that sponsor such treacherous acts and all plots against Muslims, as if the matter of the Uyghurs does not concern them! Wouldn’t the Uyghurs find out about this shameful meeting that Riyadh sponsored between Yong and Al-Zubaidi? Certainly, they will find out and will know about the betrayal of Al-Zubaidi and the Al Saud rulers against Islam and Muslims.

Will the caliph of the Muslims deal with China as the Muslim rulers deal with it today? Did Allah (swt) command us to be an economic market for investment to the enemies of Islam and Muslims, and to give them safety in our country, while they torture our people in their country? This is a simple question that we put in the hands of Muslims to answer it so that they know what is the meaning of the caliph of the Muslims who takes care of the affairs of his subjects with Islam properly and protects them from attacks on them, and so that they hasten to work with Hizb ut Tahrir to establish the Khilafah (Caliphate) on the method of Prophethood and pledge allegiance to this caliph.