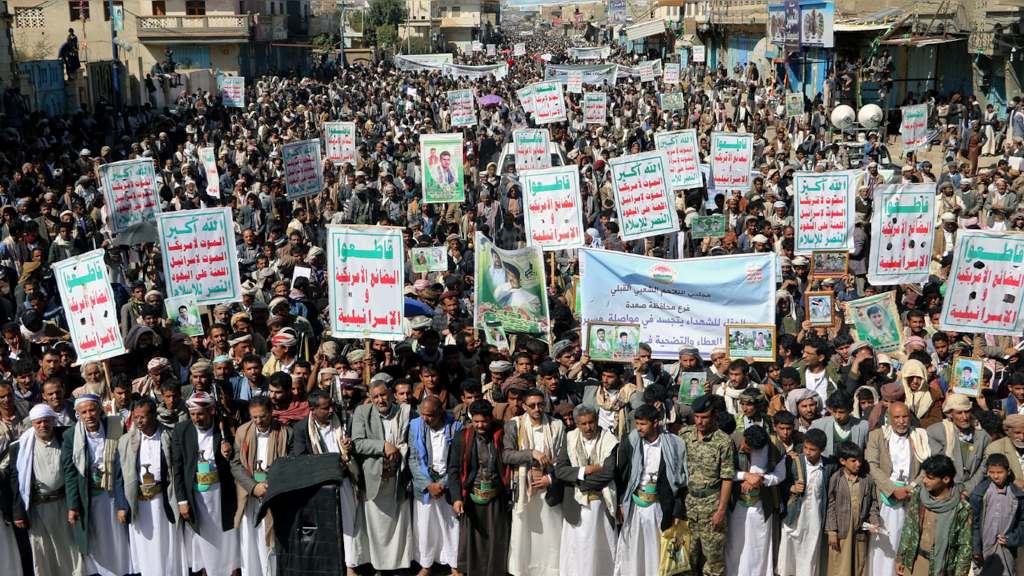 On December 27, 2020, al-Thawra Newspaper, published by al-Houthi group, reported the martyr’s anniversary under the title “Memory of those who gave lives and blood for the sake of the nation and the values ​​of truth and justice.” The Houthis celebrate every year in their areas of control what they call the anniversary of the Shaheed (martyr), where they gather for it funds and followers from everywhere, just like some regimes in the Islamic countries, where each regime devoted a day to that, and on this occasion each one of them adapts the word Shaheed to suit his interests and orientations.

There is hardly any killed person among the parties to the conflict in Yemen except he is called a Shaheed (martyr) of the homeland and the duty, and each party popularizes its killed persons and seeks to show them that they are the martyrs alone, and from their keenness to do so, it has become an occasion for the Houthi militia and is almost the same for the other side.

We are addressing the Houthi group with a question: What is the difference between your killed people since the six wars launched by the deceased Ali Saleh and the criminal Ali Mohsen at that time on you, and their killed persons, and even the killed persons of those who preceded you from the establishment of the Republic until today?! The goals and objectives are similar; you are like those who preceded you, you are giving lives for the sake of the homeland and preserving the republican system, the man-made constitution, the borders of Sykes-Picot, and in general the exclusion of Islam from the realms of life. Aren’t your wars the wars of interests in which each side implements the plans of its masters from the colonial states of the West fighting over Yemen? Is this how the testimony of the conflicting parties in Yemen became the executors of the Western colonial projects?!

The status of the Shaheed (martyr) is great with Allah, and it is a reward from Him, Glory be to Him, for the sincere ones who are killed in His way against the disbelievers, to raise the word “There is no god but Allah”. Allah has prepared for whoever is killed in His way a great reward and great reward when Allah accepts him, so that Allah does not accept someone who fights the disbelievers to show off hypocritically or to seek the world. It was narrated that Abu Musa al-Ash’ari, may Allah be pleased with him, said: A man came to the Prophet ﷺ and said, O Messenger of Allah: The man who fights for the booty, the man who fights to be mentioned, and the man who fights so that his rank is seen, which one is in the way of Allah? The Messenger of Allah ﷺ: «مَنْ قَاتَلَ لِتَكُونَ كَلِمَةُ اللَّهِ هِيَ الْعُلْيَا فَهُوَ فِي سَبِيلِ اللَّهِ» “The one who fights so that the word of Allah is highest, is in the way of Allah”, and he vowed others. It was narrated that Abu Hurayrah said: I heard the Messenger of Allah ﷺ says: «إِنَّ أَوَّلَ النَّاسِ يُقْضَى يَوْمَ الْقِيَامَةِ عَلَيْهِ رَجُلٌ اسْتُشْهِدَ، فَأُتِيَ بِهِ، فَعَرَّفَهُ نِعَمَهُ فَعَرَفَهَا، قَالَ: فَمَا عَمِلْتَ فِيهَا؟ قَالَ: قَاتَلْتُ فِيكَ حَتَّى اسْتُشْهِدْتُ، قَالَ: كَذَبْتَ، وَلَكِنَّكَ قَاتَلْتَ لِأَنْ يُقَالَ جَرِيءٌ، فَقَدْ قِيلَ، ثُمَّ أُمِرَ بِهِ فَسُحِبَ عَلَى وَجْهِهِ حَتَّى أُلْقِيَ فِي النَّارِ» “The first person(s) to be judged on the Day of Judgment is a man who was killed as a shaheed, he is brought to Him (Allah), and He informs him of the bounties of Allah and he acknowledges them. He (swt) says: What did you do with them? He answers: I fought for you until I was killed as a shaheed, He (swt) says: you lied, rather you fought because so that it be said ‘he is brave’, and it has been said, and then he commands regarding him and he is dragged upon his face until he is thrown into the Fire.” So how about those who are killed in order to maintain the situation that has been brought to us by colonialism, in respect of borders, systems and constitutions?!

To fight in the way of Allah is to fight under the banner of Al-Okab, the banner of the Messenger of Allah ﷺ; the banner of the second Khilafah Rashidah (righteous Caliphate) on the Method of Prophethood, which fights the Kuffar, spreads truth and justice, and protects the blood of Muslims and themselves from fighting among themselves.

“And never think of those who have been killed in the cause of Allah as dead. Rather, they are alive with their Lord, receiving provision” [Al-i-Imran: 169].