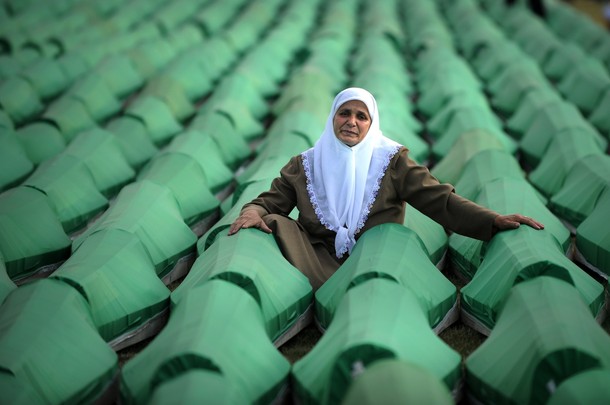 What happened in Srebrenica during the Bosnian war, which resulted in a popular political term of “Balkanization”, was a dark stain in the history of modern politics. The delegitimization of the leadership of the Communist-Socialist regimes impacted Yugoslavia’s internal politics in the early 1990s. Yugoslavia was then divided into several countries: Slovenia, Croatia, Bosnia and Herzegovina, Serbia, Montenegro, and Macedonia. The opponents of the socialist regime called it a wave of democratization for it ended the rule of the communist regime in Yugoslavia. Unfortunately, this wave also ignited the spirit of nationalism based on ethnicity and religion. As a result, the term Balkanization is now better known as a pejorative geopolitical term which is identical to the disintegration of one region.

Muslims had to pay a very high price because of this Balkanization. The 3-year Bosnian war, from 1992 to 1995, witnessed the ethnic cleansing of Muslims (read: genocide) from hundreds of towns and villages. Apart from the long and dark history of Bosnian war, this article will focus more on highlighting the concept of bloody nationalism which is the main fuel of Balkanization in Muslim lands as well as the cause of the loss of thousands of Muslim lives in Bosnia. It was this concept that encouraged the Serbian leader Slobodan Milosevic to clean up the ethnic of Bosnian Muslims, because he sought to create their nationalistic vision of a Greater Serbia, with an ethnically pure Serbian territory along the Drina River.

The dangerous and poisonous idea of nationalism that possessed Milosevic cannot be separated from the historical roots of nationalism itself. It is rooted in the concept of Westphalian sovereignty, which was developed by the warring Christian nations of Europe in 1648 and manifested to the concept of a territorial state. Its progress culminated in the 19th century. The idea of nationalism considers a legitimate state is related to a nation, which is a particular or a set of ethnicities or a people confined to certain geographical limits.

Nationalism, therefore, has no historical roots in Islamic civilization. If we take a closer look at the historical timeline, nationalism was a new reality imposed on the mapping of the Islamic world region. According to an Islamic civilization researcher from Indonesia, Prof. Ajid Thohir, nationalism was born in Muslim lands as a result of the imperialist and colonialist interests in the 18th century until the beginning of the 20th century. Unfortunately, it has indirectly fostered a spirit of political fragmentation among Muslims.

In fact, around the 8th century until the 18th century, the Islamic Ummah was once a united people which leadership and center of government were under one system of the caliphate (the super state). Since its birth together with the message of Muhammad ﷺ, Muslims had lived as one single Ummah, not only united under one Aqeedah (belief) but also under one living system. Today, with more than 1 billion in number, Muslims are living fragmented in their nation-based territories, running their separated governments, applying their religious rules based on problems in their separated environments.

Since the beginning of the 20th century, Muslims have experienced a process of “Balkanization” globally under the guise of nationalism and struggle for self-determination. Along with decolonization which produced many new countries in the name of independence from Western colonialism, the Islamic World was divided into more than fifty nation-states. But that’s not the end of the story. The Muslim Ummah fell into the trap of new Western hegemony. Muslim countries have then lived under the secular nation-state order, shrouded in the hegemony of Capitalism and stuffed with slogans of democracy and human rights.

Ironically, the fate of Muslims is far from progress, dignity, and prosperity. Around 12.5 million Muslims have been killed in many wars over the past 25 years, according to scholar Refik Turan, head of the Turkish Historical Society, who said in 2018 conference in Istanbul, “This almost accounts for the losses in a World War.” This figure does not include Muslims being tortured to death by Buddhists in Myanmar and at the hands of the Chinese in Xinjiang. Additionally, millions of Muslims dying from hunger, diseases, migration, and other man-made inflicted disasters are excluded from the list.

The nation-state boundaries have also made Rohingyan Muslims alienated from their Muslim brothers in Bangladesh, Malaysia, and Indonesia. This also happened to Uyghur Muslims who were suffered under the Chinese tyrant and abandoned by Muslim rulers due to prioritizing their national economic interests. This does not include hundreds of thousands of stateless Muslim refugees who were displaced from Syria, Iraq, and Palestine. This is the high price to pay for the disunity and division of the ummah.

Once the West knew this secret of the strength of Muslim Ummah, they had exerted their efforts to strike and eliminate it, or at least weaken the principle of al–Walaa’ wal-Bara’ah (loyalty and disavowal) from the body of Muslims. They had adopted the idea of “nationalism” to realize their wicked goal. Consequently, the harsh reality that must be faced and experienced by Muslims was the loss of the concept of al-Walaa’ wal-Bara’ah from the hearts of their successive generations. Their loyalty to Islam has been gradually diminished, and eventually shattered by misguided understandings.

Any deeds and struggles conducted by the Muslim Ummah have been no longer for the benefits of Islam, nor for the sake of upholding the Kalimah Allah (tauheed) upon this earth. The belief that Islam is a mercy for all creations has been shaken. They have been unwilling to adopt the Islamic values ​​and teachings to prosper the world and advance a nation. Long before, Islam had warned its Ummah not to get entrapped in this kind of misguided understanding, because nationalism has been classified as a concept of jahiliyya (ignorance) in the Islam perspective. In one hadith, the Prophet ﷺ strongly denounced the advocates of ashabiya to be jahiliyya people: «وَمَنْ قَاتَلَ تَحْتَ رَايَةٍ عُمِّيَّةٍ يَغْضَبُ لِعَصَبَةٍ أَوْ يَدْعُو إِلَى عَصَبَةٍ أَوْ يَنْصُرُ عَصَبَةً فَقُتِلَ فَقِتْلَةٌ جَاهِلِيَّةٌ» “And one who fights under the banner of a people who are blind (fanaticism), who gets flared up with family pride, calls (people) to fight for their family honour, and supports his kith and kin (not for the cause of Allah) – if he is killed, he dies as one belonging to the days of Jahiliyya.”  [Narrated by Muslim]

This strict prohibition is further elaborated by Shaykh Muhammad Said Al-Qahthani as he said: “That Nationalism is a form of shirk because it would demand someone to fight for it, and hate another group that becomes his enemy – regardless of Muslims or not –, thus indirectly he has set it up as partner with Allah SWT“.

Muhammad Qutb even put the idea of nationalism in line with other heretical ideologies such as communism, secularism, and democracy, which are contrary to the Islamic Aqeedah and can invalidate Islam of someone. He reasoned that this idea teaches its followers to separate Islam from their lives. His opinion is not much different from Abul A’la al Maududi, a Pakistani scholar, in one of his writings. He refused the merging of Islam with the idea of nationalism. He did not approve of anyone who claims himself as a Muslim nationalist, because neither of Islam and nationalism could never in line.

Nationalism has divided, weakened, and orphaned Muslims by losing their guardian, and made them prey whose fate is at the mercy of the plundering predators that have been picking them up one by one every single night. Imagine that in 1995 alone, we lost 8,000 Muslim lives in Bosnia, and during these 25 years we have lost more than 12.5 million Muslim lives! It’s increased 1500 times! Moreover, this does not include data from all bloody arenas throughout the world. This is the miserable condition of the Muslim Ummah today, as the result of the loss of its shield, the Islamic Khilafah, which was destroyed in 1924, nearly ninety years ago.

Islam has obliged its Ummah to live under one political leadership, the Khilafah (Caliphate). It is forbidden for them to be fragmented under more than one political leadership, let alone live oppressed under the tyranny of the Kuffar majorities. Return the shield of the Ummah, who will eliminate the hegemony of the Kuffar over Muslims as well as protect the blood and honor of Muslim women and children throughout the Muslim world! The only salvation for the Ummah is the return of the Khilafah based on the Prophetic Method. The Prophet ﷺ said,

“A commander (of the Muslims) is a shield for them. They fight behind him and they are protected by (him from tyrants and aggressors).” [Sahih Muslim]