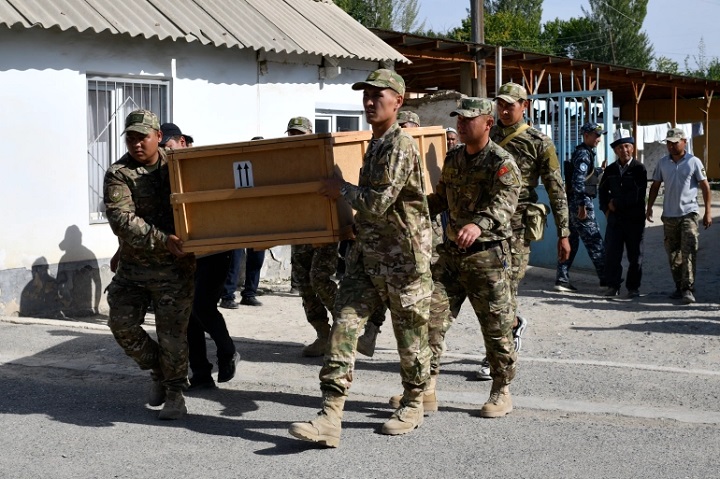 The Kyrgyz side noted that on September 16, 2022, violating all previously reached agreements, the Tajik side, having pulled troops to the border of Kyrgyzstan in advance, using armed forces, heavy military equipment, treacherously attacked the border and civilian facilities along the entire perimeter of the Kyrgyz-Tajik State border in Batken and Leilek districts of the Batken region of the Kyrgyz Republic.

The Kyrgyz side demanded to strictly comply with all the agreements reached, to cease fire and withdraw military formations, and also not to create a situation that could lead to an escalation of the situation in the border areas, and again emphasized that all problems arising on the border should be resolved exclusively by political and diplomatic means”.

Comment:
The latest conflict on the border between Tajikistan and Kyrgyzstan carried many lives. The Ministry of Health of Kyrgyzstan reported that as a result of the aggression from the Tajik side, 59 people died and 140 were injured. About 140,000 local people were evacuated from nearby territories. In turn, the Tajik Foreign Ministry confirmed 41 dead. Both sides accuse each other of the provocation and intrusion into their territory.

The conflict flared up and gained momentum at a time when the presidents of both republics were in Samarkand, Uzbekistan for the SCO summit on 16 September. The summit was attended by the leaders of 15 states. International security remained at the head of the SCO agenda, but the conflict that flared up nearby, on the border between Tajikistan and Kyrgyzstan, was not raised on the agenda.

While V. Putin was waiting for an official meeting with President of Kyrgyzstan S. Zhaparov, Uzbekistan and China signed agreements on business partnership worth $15 billion. Also, China, Kyrgyzstan and Uzbekistan signed an agreement on the building of the railway – Uzbekistan, Kyrgyzstan, China. Today, Uzbek goods pass through Kazakhstan, Russia and Belarus to reach European markets. And this road will become a short way for Uzbekistan to Europe and Asian markets, bypassing Russia, which fell under sanctions.

Everyone knows that Russia has been trying to subjugate Uzbekistan for a long time, but President Shavkat Mirziyoev is distancing himself from the Kremlin. Refusal of membership in the CSTO also confirms this. It seems that V. Putin took as a personal insult the expectation of a meeting and the agreements signed by the President of Kyrgyzstan with Zhaparov. As a result, V. Putin gave the go-ahead to his obedient servant, the tyrant E. Rahmon, to teach S. Zhaparov a lesson and scare Sh. Mirziyaev with an armed conflict. This conflict on the border is located not far from the Uzbek border, which thereby strains Sh. Mirziyoyev as well. Tyrant E. Rahmon, in turn, attacking his neighbors, calls for nationalism in order to raise the feelings of the people and unite around him. On the other hand, the authorities of Kyrgyzstan are defending themselves and adding fuel to the fire of the spirit of nationalism. Ultimately, two brotherly peoples, Muslims, find themselves drawn into a bloody struggle.

Nationalistic feelings, which are so skillfully used by tyrants, have once again become a dirty tool to achieve their goals in the hands of E. Rahmon and V. Putin. The two fraternal peoples, the Tajiks and the Kirghiz, are primarily Muslims. Allah Almighty said in His Noble Book:

O Muslims! Nationalism, patriotism and similar ideas are alien to Islam and Muslims! We are all descendants of Adam (as). Our Lord is Allah! Our Prophet is Muhammad (saw)! Our Book is the Quran! Prophet Muhammad (saw) said:

“O people! Indeed, your Lord is one. Truly your father is one. Of course, there is no advantage for an Arab over a non-Arab, no advantage for a black over a red and for a red over a black, except in piety. Indeed, the most valuable among you with Allah is the most pious.” [Ahmad].