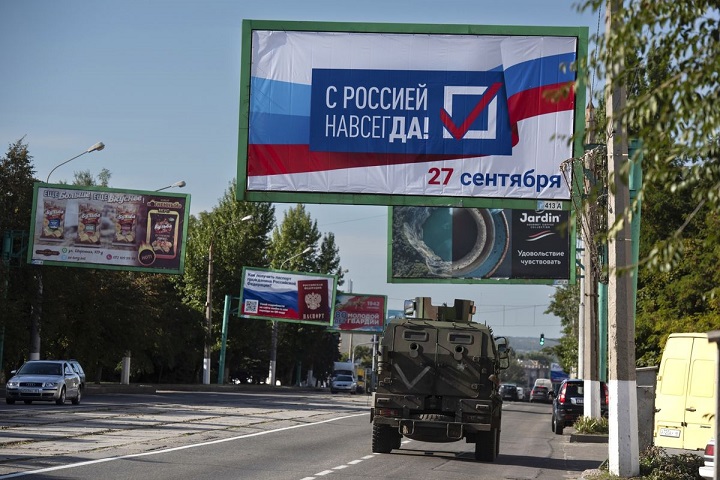 Details:
The West Denounces Putin’s Annexation of Four Regions in Ukraine
Under Criticism by India, US Defends Arms Sales to Pakistan

The West Denounces Putin’s Annexation of Four Regions in Ukraine

Russian President Vladimir Putin signed decrees Friday to annex four regions of Ukraine. In a grand ceremony in the Kremlin, he said Russia would formally incorporate Ukraine’s Donetsk, Luhansk, Kherson and Zaporizhzhia regions — and that the people living there would “be our citizens forever.”

The United States and Western nations denounced the move as a flagrant violation of international law, with the Biden administration announcing a new round of sanctions against Russian military and government officials, as well as defense procurement networks in Russia and Belarus.

This year’s Ukraine incursion by President Vladimir Putin is proving to be the most foolish decision of his two decades plus of ruling over Russia. Putin had only been grandstanding, showing off Russian power in the vicinity of Ukraine for political advantage; but America was able to play on Putin’s weak temperament to tempt him into a full-scale invasion of Ukrainian land. Of course, without proper, careful military planning and execution, and serious strategic oversight, the entire mission has proved disastrous. Russia’s early advances have turned into defeat upon defeat. Now, in an attempt to salvage what he can, Putin has declared the annexation of the four Ukrainian regions after an untrustworthy vote held under Russian military occupation.

Meanwhile, after having engineered the entire situation, the actual instigator of the Russian incursion, US President Joe Biden chose to respond aggressively to Putin’s actions. According to the New York Times:

“The United States is never going to recognize this, and quite frankly the world is not going to recognize it either,” Mr. Biden said from the White House. “He can’t seize his neighbor’s territory and get away with it. It is as simple as that.”

Biden’s reference to so-called international law at this juncture is most hypocritical. America violates international law whenever it chooses to, such as its own numerous invasions of other countries in recent decades as well as its countless programmes of covert regime change in the many countries that the US has worked to bring under its imperialist control. Furthermore, it is the framing of international law itself that bears considerable blame for this. The Westphalian nation-state model provides an overly rigid geopolitical structure that leaves powerful countries only with the option of subverting those less capable. Before Westphalia, borders were fluid and countries would naturally and regularly adjust those between themselves with minimal damage and bloodshed, in accordance with the fluctuations in their respective governance capabilities. It is not the annexing of lands that must be prohibited but the continued covert imperialist domination by Western great powers who exploit the wealth and resources of vast continents without bearing responsibility for their governance.

But with the permission of Allah (swt), the Muslim Ummah shall soon arise and re-establish her Islamic Khilafah (Caliphate) State on the method of the Prophet (saw) that shall liberate occupied territories, unify Muslim lands, implement the Islamic Sharia, restore the Islamic way of life and carry the light of Islam to the entire world. The Khilafah State shall, almost from its inception, join the ranks of the great powers on account of its vast size, immense population, extensive resources, unparalleled geography and unique Islamic ideology. The Khilafah State shall work to confront, contain and calm the machinations of the disbelieving great powers, returning the world to the general peace and prosperity that existed in the thousand years when Islam last dominated the world.

Under Criticism by India, US Defends Arms Sales to Pakistan

US Secretary of State Antony Blinken has defended US military sales to Pakistan amid criticism from India, which says it is the target of a $450m F-16 fighter jet deal between Washington and Islamabad.

During a news conference in the United States capital on Tuesday, Blinken said that the military package approved earlier this month was for maintenance of Pakistan’s existing fleet.

“These are not new planes, new systems, new weapons. It’s sustaining what they have,” said Blinken, who spoke alongside India’s External Affairs Minister Subrahmanyam Jaishankar.

“Pakistan’s programme bolsters its capability to deal with terrorist threats emanating from Pakistan or from the region. It’s in no one’s interests that those threats be able to go forward with impunity,” he said.

Despite Indian protestations, the American arms deal in fact does not benefit Pakistan but harms it. Pakistan has long subordinated itself to American interests. American military equipment, and their extensive contract clauses, only binds other countries more strongly to the American agenda. Continued foreign acquisitions of military hardware have hampered Pakistan’s own domestic military industrial development even though Pakistani scientists have proven capability in Pakistan becoming a nuclear power. Furthermore, America carefully calibrates exactly how much and what type of weaponry to give Pakistan, in order to benefit US regional strategy. The US has regularly employed Pakistan as a stick to keep India under its control; and America has directed Pakistani militarisation in such a manner as to force India to also aggressively militarise thereby bringing it into confrontation with China.

Muslim countries today, despite formal independence, continue to be ruled by an agent political class that sees its very survival in its ongoing loyalty to its imperial disbelieving Western masters. But with the permission of Allah (swt), the Muslim Ummah shall soon arise and overthrow these regimes, replacing them with sincere, indigenous, capable leadership that shall serve the agenda of Muslims and Islam, and not that of the disbelieving foreign powers. Allah (swt) says in the Noble Qur’an:

“Let not believers take disbelievers as allies rather than believers. And whoever [of you] does that has nothing with Allah, except when taking precaution against them in prudence. And Allah warns you of Himself, and to Allah is the [final] destination.” [Aali Imran: 28].