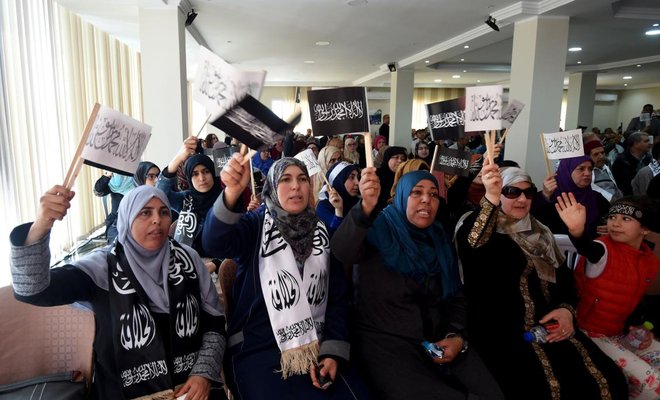 We Need the Khilafah that Will be Our Guardian and Shield

International Women’s Day (IWD), on the 8th of March, was marked with the familiar annual celebrations, rallies and protests in countries across the world, including the Muslim lands to recognize the achievements made by women globally, as well as to call for action to further the cause of gender parity within societies and protect women and improve their rights and quality of life. The theme for 2020 was ‘Each for Equal’ that called for collective action to achieve gender equality in governments, workplaces, sports and media coverage in addition to other sectors within states. The UN’s theme for the commemoration of IWD this year was, “I am Generation Equality: Realizing Women’s Rights”, which is part of the global campaign launched by UN women in 2020 aimed at galvanizing a new generation of women within countries across the world, including the Muslim lands, to champion the call for gender equality within their nations.

The concept of ‘Gender equality’ which calls for equalizing the rights, roles and responsibilities of men and women within family life and society, is presented as some sort of magic potion that states and individuals should drink to improve the plight, quality of life, protection and rights of women. However, gender equality and feminist policies have achieved little to nothing in reducing the scale of violence that women face within their societies or in lifting their economic hardship or state of oppression. In countries such as Tunisia and Turkey for example, which are hailed as leaders in gender equality legislation in the Muslim world, the level of violence targeted at women is at shocking levels. According to 2016 statistics from Tunisia’s Ministry of Women, Family and Childhood, 60% of women in the country experience domestic violence, while in Turkey, according to the Turkish Ministry of Justice, from 2003 – 2014, there was a 1,400 percent increase in the number of murders of women. Furthermore, what exactly have gender equality laws and women’s agreements such as the Beijing Platform for Action and CEDAW done to protect the tens of thousands of women in Syria who have been slaughtered by the butchers Assad and Putin; or to provide dignified sanctuary to the millions of female refugees from the war who are living in inhumane camps; or to protect the thousands of persecuted Rohingya and Uyghur Muslim women and girls as well as those in Palestine, Kashmir, Central Africa and elsewhere who have been tormented, tortured, dishonoured and killed by their oppressors and occupiers? And how exactly have these equality policies lifted the poverty faced by millions of women in states east and west? According to the World Bank, almost half the world’s population – 3.4 billion people – still struggle to meet basic needs, while in Britain, one of the countries from which the call for gender equality arose over two centuries ago, 45% of single parents – 90% of whom are women – are living in poverty (according to the UK government’s Department of Work and Pensions). And what exactly have the intense feminist and gender equality agendas implemented by international bodies, women’s organisations and the governments of Pakistan and Afghanistan done to improve the educational opportunities for the masses of women and girls in these countries? In Afghanistan today, 40% of all schools in the country do not have buildings, an estimated two-thirds of Afghan girls do not go to school (Human Rights Watch, 2017) and 84% of women in the country are illiterate (Afghanistan Central Statistics Organization, 2017).

Truly, gender equality has served as nothing but a drug to numb the senses away from the realization that it is the capitalist system with its secular and liberal ideals and values, as well as other man-made ideologies and systems implemented upon lands, that bear prime responsibility for the multitude of injustices, violence and other crimes enacted against women internationally. This includes the fueling of wars for profit by capitalist states and their support of dictatorships who do their bidding, regardless of the oppression of the men and women they rule. Hence, feminist movements have engaged the time and efforts of women in futile battles which have failed to even dent the scale of problems they face.

In truth, there is no correlation between the extent of gender equality laws and policies implemented within states and the quality of life of their women. However, there is a definite correlation between the years passed since the loss of the Khilafah state (Caliphate) and the scale of affliction, suffering and misery affecting women in the Muslim lands and indeed Muslim women globally. This Rajab marks 99 years in the Hijri calendar since the destruction of this glorious state, the System of Allah (swt). It was this catastrophe that marked the start of the darkest chapter in this Ummah’s history, of which women and children have been the greatest victims, for we lost a state that stood as the guardian and shield of our dignity, rights and wellbeing as women. The Prophet ﷺ said, «الإِمَامُ رَاعٍ وَهُوَ مَسْئُولٌ عَنْ رَعِيَّتِهِ» “The Imam is a guardian and he is responsible for his subjects”. We lost a state that created prosperity in our lands, ensured that we were always provided for and enjoyed a good quality of life; a state that created first-class education and health care systems from which women and men benefited greatly; and a system that had a zero tolerance approach to any form of violence or harm to women, and mobilized armies to defend their honour. Therefore, our focus, time and efforts as Muslim women should be directed towards the urgent re-establishment of the Khilafah based upon the method of the Prophethood, for it is an obligation from our Lord (swt) and because no real change will materialize for our lands, this world and our lives as women without its return.