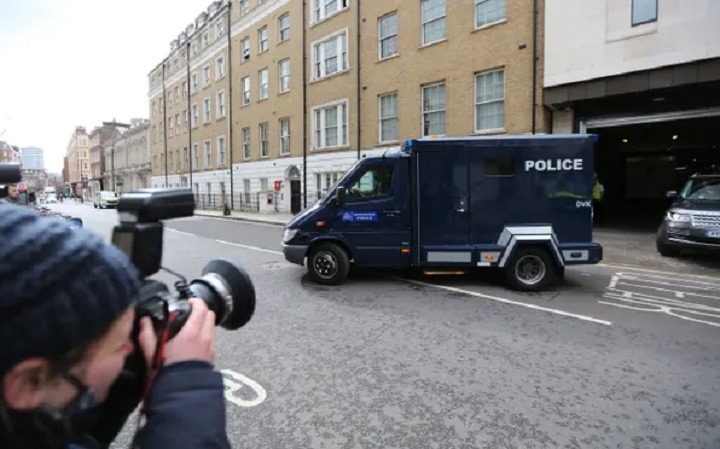 The Independent Office for Police Conduct (IOPC) said two Metropolitan Police officers, and one from each of the forces in Sussex, Dorset and Avon and Somerset will be subject to misconduct proceedings.

Couzens received a whole-life prison sentence last month after admitting to the kidnap, rape and murder of Sarah Everard.

Now, two officers from the Metropolitan Police, and one from each force in Sussex, Dorset and Avon and Somerset are subject to misconduct hearings.

One of the Met Police officers facing disciplinary action was referred to the Independent Office for Police Conduct (IOPC) in March.

The constable on probation, who went on to staff a cordon as part of the search for Ms Everard, was investigated over allegations they used WhatsApp “to share with colleagues an inappropriate graphic, depicting violence against women” while off-duty.

The investigation, completed in August, indicated that the graphic was intended to be in reference to the kidnap and murder of Sarah Everard. (Sky News)

Comment:
A 2014 EU-wide survey found 44% of women claiming physical or sexual violence with levels in France reaching the same as the UK.

Germany and France had the worst records of femicide.

In 2017, Romania and Northern Ireland had the highest number of femicide per capita.

In Britain: 4 women are killed every 4 days. The BBC recently put it at every 3 days.

This isn’t just a police problem. It is endemic in liberal societies. It is even the sport of their leaders and elites. From former US President Trump’s open misogyny and alleged assaults on women, to disgraced movie mogul Harvey Weinstein’s shocking series of abuse, to the trafficking of girls for abuse by the late financier Jeffrey Epstein’s whose clientele allegedly included world leaders, the rich and luminaries of the liberal secular society.

Britain is either unwilling or unable to solve this. Prime Minister Johnson, a notorious serial adulterer has unsurprisingly refused to criminalise misogyny and public sexual harassment of women. Their ‘laser-focused’ new ‘Justice Minister’ appeared not to even know what misogyny meant. Home Secretary Patel, is totally unequaled to the scale and gravity of to this alarming, urgent crisis in police and wider society.

Even transgender-men are getting in on the abuse. In the US, a ‘gender-fluid’ boy, attacked 9th grade girls in the school’s female toilets (Stone Bridge High, Virginia). In the UK, ‘gender-reassigned’ male prisoners, transferred to female prisons are deemed ‘more likely’ to attack female inmates. And in fact they have done so.

After centuries, liberal civil societies are still mainly, the construct of men and women are still at the mercy of man-made attitudes, prejudices and ultimately, laws. Before the Married Women’s Property Act, 1887, all properties of the wife (even inherited) became his. Before 1990, the income of a married woman was treated as her husband’s income.

Even now, in the 21st century, a Western woman does not have all the same rights importance nor security guaranteed her as how Islam guarantees these for women. Yet, these same Western societies have the brass neck to sermonise Muslims on ‘women’s rights’. They are obsessed with the Muslim woman. Demanding a ‘dignity and freedom’ which they claim can only be attained by being exposed, objectified like the liberal women in their lands.

Ironically, the ‘civic norms and guaranteed rights’ of liberal democracy do not extend to all women, especially Muslim women in the West. Muslimahs are endlessly harassed and mistreated merely for being sincere to their faith. No right to belief, nor to dress as they wish. Arrested, fined, sacked from jobs, blocked from higher education, persecuted and oppressed simply for refusing to remove their head scarves.

Are these the principles of a people who sincerely want to protect women or care for their wellbeing?

Islam does not leave rights, security and honour of women to be determined by men or indeed women. It is defined by the Shari’ah revealed to us by Allah (Subhanahu wa Ta’ala). Islam enjoins men to treat their women well. Be they their wives, mothers or daughters. Abdullah bin ‘Amr (radhiallahu anhu) related that Rasulullah (sallallahu alaihi wa sallam) said:

«خِيَارُكُمْ خِيَارُكُمْ لِنِسَائِهِمْ»‏ “The best of you are those who are best to their womenfolk.”

Islam defined the rights and responsibilities of both women and men. Women had rights not only to own property but also agency.

Marriage in Islam begins with a ‘mahr’, a gift from the husband to the wife and the love and tranquility between husband and wife is even considered one of the signs of Allah (swt).

“And of His signs is that He created for you from yourselves mates that you may find tranquility in them; and He placed between you affection and mercy. Indeed in that are signs for a people who give thought.” [T.T.Q. Ar-Rum 30:21]

Islam protects even the honour of women, the Creator and Sustainer of the universe decreed punishment for those who slander women. Allah (swt) says,

“And those who accuse chaste women and then do not produce four witnesses – lash them with eighty lashes and do not accept from them testimony ever after. And those are the defiantly disobedient” [T.T.Q. Surah An-Nur 24:4].

Secularism does not provide a comprehensive solution that protects and honours women. Only the system of Islam has achieved this.