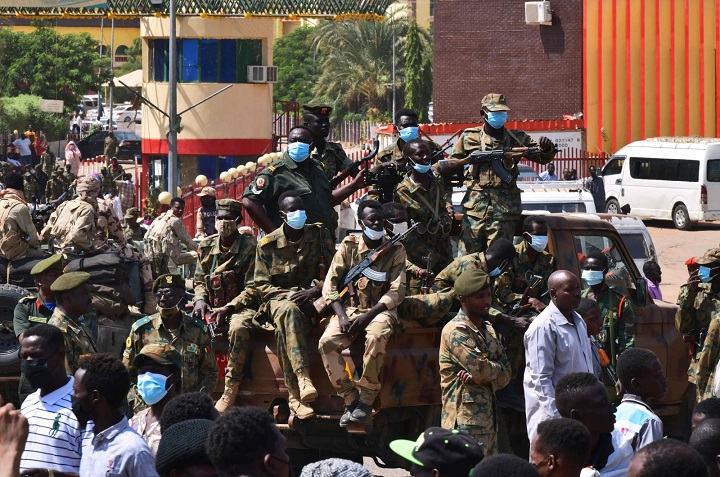 Today, 25/10/2021, the people of Sudan woke up to movements erupting from the army that made arrests of some ministers in addition to a number of participants in the civilian transitional government, and then the arrest of Prime Minister Hamdok himself… Afterwards, Al-Burhan gave a televised speech in which he declared a state of emergency, dissolution of the Sovereignty Council and the transitional cabinet and the exemption of the directors of the states and then the undersecretaries of the ministries, and he called upon the general directors to manage the affairs of the ministries… He announced that he did not cancel the constitutional document, but rather canceled key articles from it as stated in his speech, and that he wanted to rectify the revolution’s course and not abandon the revolution!

O Muslims: The Muslim lands have become a stage for the colonial Kuffar, who are more lethal towards Islam and its people, to compete over their lands, then they find tools for themselves from the sons of the Muslims who hold their hands in support, as if they do not comprehend. Rather, they really do not comprehend. America and its agents in the leadership of the army: Al-Burhan and his aides, and Europe, especially Britain, in the ministry of Hamdok and his brothers, are struggling who will win control and dominance over Sudan and its people to suck its wealth and seize its location and resources. We do not refer to the heedlessness of its people, but rather to the insight of those who control their necks, whether it is Burhan or Hamdok, without being ashamed before Allah (swt), neither before His Messenger (saw) nor before His servants, but rather rushing to what paves the way for them to disgrace in the life of this world and the Hereafter, and that is the greatest disgrace.

The two sides dig holes for each other to fall into! The two parties agreed on the constitutional document on August 21, 2019 for a period of 39 months, for Burhan and his aides to rule for 21 months, then Hamdok and those with him will follow for the next 18 months, and then civilians will assume in May 2021. However, it was amended after the Juba Agreement on 3/10/2020 to be about 53 months from the constitutional document, so civilians would start ruling in November 2021, and it was known that the military would not allow this and then disrupt it. They will not enable civilians to rule in November of this year, and this matter was not unknown to every conscious person who is aware of things at its face value. We had previously issued an answer on September 23, 2019 regarding the constitutional document agreement, in which we said:

[- The government in Sudan according to the Constitutional Document is almost formed of two teams with varying powers and conflicting foreign loyalties, and this matter will be reflected in their work in solving people’s problems and the safety of their lives, and each of them will be concerned with serving the direction they follow. And then one of them waits for the other to be excluded by internal and external means… The establishment of such councils in Sudan is known to have been established only in connection with the transitional periods and crises… until the army can arrange matters of the state, dissolve the council, and impose a president of the country from among the army officers], then we added: [- As for what is expected, America and Britain will not coexist quietly. Their interests are different and their local tools follow, so both sides will work to abort the movements of the other! By following up the current events, studying their related issues and examining statements externally and locally, especially of American and European officials, we can work out the likely means that both sides will use to harass its opponent and then exclude it from power.]

This is what happened, so the military instigated matters that paved the way for what Burhan announced today of a state of emergency in the country and more misery, trouble and suffering for the people of Sudan in the service of its colonial Kuffar masters!

O Muslims: It is not strange for the enemies of Islam to compete to weaken the country and the people, but the sadly peculiar part is that this is done by agents who are affiliated with Islam and Muslims, and the Muslims are silent while they see and hear them! Then they complain about the hardship of living and the scarcity of food and drink, as if they did not know His Words, the Most High:

“But whoever turns away from My Reminder will certainly have a miserable life,1 then We will raise them up blind on the Day of Judgment * They will cry, “My Lord! Why have you raised me up blind, although I used to see?” * Allah will respond, “It is so, just as Our revelations came to you and you neglected them, so Today you are neglected.” [TMQ Taha: 124-126].

O People of Strength and Deterrence: Is there not a rational man among you?! There is no excuse for an apology. Do you think America and Britain are roaming here and there in your lands, and their tools are men who live amongst you, but rather leaders who lead you to humiliation and degradation, and yet you offer excuses so that you do not stand up to their faces?! These are the colonialist Kuffar:

“They do not honour the bonds of kinship or treaties with the believers. It is they who are the transgressors.” [TMQ At-Tawbah: 10]

“They are the enemy, so beware of them. May Allah destroy them; how can they be deluded from the truth?” [TMQ Al-Munafiqun: 4]. And those who are loyal to them from among the rulers in Muslim lands, it is not permissible to be dependent on them, and they are unjust and immoral.

“And do not be inclined to the wrongdoers or you will be touched by the Fire. For then you would have no protectors other than Allah, nor would you be helped.” [TMQ Hud: 113]. How can you not move?! How can honor not take you by force and victory, so that you remove those tyrants, the enemies of Allah and His Messenger?! How can the honour of Islam not move you so that you remember the Ansar on the second day of Aqabah who supported the religion of Allah and the servants of Allah and the carriers of His call?!

Hizb ut Tahrir invites you to support it to establish the rule of Allah and to remove the tyrants who control the country and the people for the benefit of the colonial Kuffar. Come, O people of strength and power, to the support of Allah and His Messenger to remove the rule of the tyrant (taghut) and establish the rule of Allah, so to be dignified in both worlds, and that is the great victory. Come, people of strength and power, and remember Saad bin Muadh, whose death shook the Throne of the Most Merciful in honor of his faith and his support towards the religion of Allah (swt). Al-Bukhari narrated on the authority of Jabir, may Allah be pleased with him, I heard the Prophet (saw) say:

Hizb ut Tahrir invites you to support it and not to fear the enemies of Allah, and remember the saying of the Allah, the All-Mighty the Exalted, and His Truthful Saying:

(إِنْ تَنْصُرُوا اللَّهَ يَنْصُرْكُمْ وَيُثَبِّتْ أَقْدَامَكُمْ) “O believers! If you stand up for Allah, He will help you and make your steps firm.” [TMQ Muhammad: 7]

“He will forgive your sins, and admit you into Gardens under which rivers flow, and ˹house you in˺ splendid homes in the Gardens of Eternity. That is the ultimate triumph.” [TMQ As-Saff: 12].

O Muslims! O People of Strength and Power: Hizb ut Tahrir calls upon your support so support it and is honoured by you so give it honour:

“O believers! Respond to Allah and His Messenger when he calls you to that which gives you life. And know that Allah stands between a person and their heart, and that to Him you will all be gathered.” [TMQ Al-Anfal: 24].