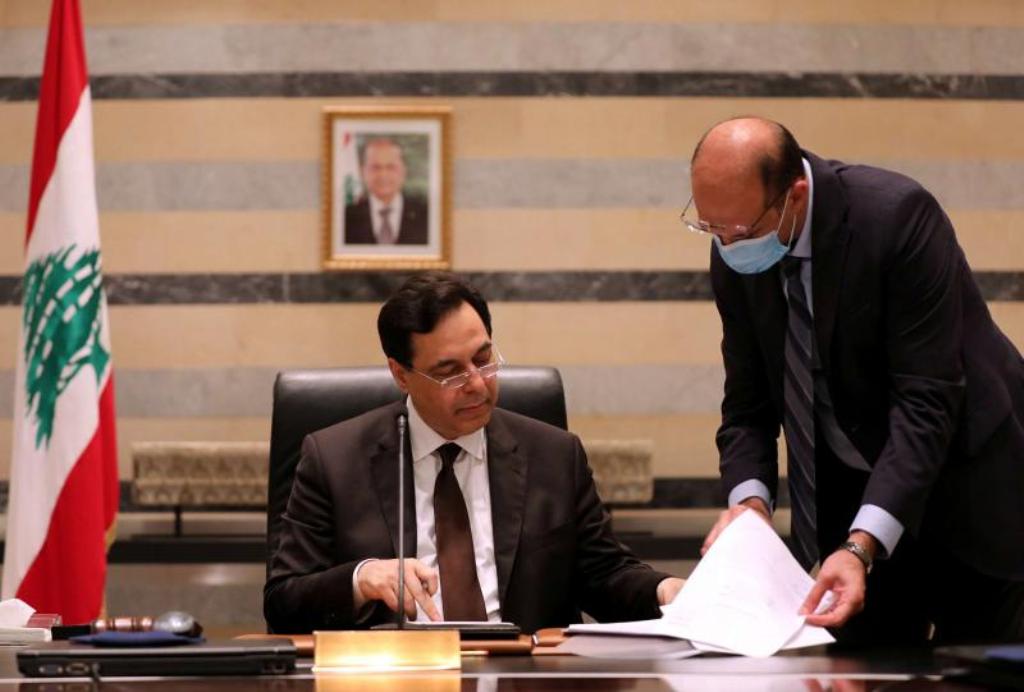 Lebanon’s prime minister resigned Monday amid public fury about official negligence that led to an explosion so massive that it devastated swaths of the capital, but his announcement failed to quiet the anger on the streets.

In a televised address, Prime Minister Hassan Diab said a level of corruption “bigger than the state” precipitated the events that led to the blast, which erupted in a warehouse that contained 2,750 metric tons of ammonium nitrate that had been stored there for years despite repeated warnings that it was unsafe.

“Only God knows how many catastrophes they are hiding,” he said in an apparent reference to the country’s ruling elite. “That’s why I have announced my resignation today. May Allah protect Lebanon.”

President Michel Aoun said that Diab and his cabinet will stay on in a caretaker capacity until a new government is formed, which could require months of political wrangling…

Diab became prime minister in January, after his predecessor Saad Hariri had resigned following huge street protests demanding an overhaul of the country’s decades-old system of corrupt, sectarian rule. Diab’s appointment was supported by the Iranian-allied Hezbollah group, which pushed for his lineup of ministers.

People with ties to the government said Diab had lost the support of powerful politicians who had originally backed his government. These politicians feared that he was going too far in investigating corruption that had allowed the ammonium nitrate to remain in the port warehouse for six years.

“The system realized that he was going to investigate the port properly,” said an adviser to Diab’s government.

Diab’s announcement that he would lift Lebanon’s stringent banking secrecy laws on 19 port officials, who had been placed under house arrest after the explosion, alarmed politicians who participated in successive governments during those years, the adviser said. “The system freaked out about one particular thing, which was lifting the banking secrecy. It was done unilaterally, through the courts without parliament,” he said. “It was a sign that maybe Diab was not quite under control.” [The Washington Post]

The full blame for the calamitous explosion in Beirut must lie with the Lebanese authorities, irrespective of whom it was that actually triggered it, whether by accident or deliberately. It is the Lebanese government that had failed over six years to dispose of thousands of tons of explosive chemical stored at the Beirut port. But Prime Minister Hassan Diab has only been in office since the beginning of this year; the problem is much bigger than his government alone.

The corruption that Diab described as being “bigger than the state” can seep into any system that becomes inefficient. And Lebanon’s system is certainly inefficient with its rigid sectarian divisions requiring the President to be Maronite Christian, the Prime Minister a Sunni Muslim, the Speaker of the Parliament a Shi’a Muslim, the head of the armed forces a Druze, and other elements all based on a 1932 census showing a majority Christian population that successive governments have consistently refused to update. However, corruption in Lebanon is not just a symptom of its government’s dysfunction but is intrinsic to the Capitalist system as exists wherever it is implemented, most notably in the ‘advanced’ Western countries, where a powerful elite outside the system captures control of the system. In America these are the oil industry, the military industrial complex, the financial sector, the giant pharmaceutical companies and many others, who exploit the masses to enrich themselves. The same phenomenon of elite capture exists in Muslim countries also whenever Capitalism is implemented. As the Washington Post article indicates, Diab resigned not because of popular so-called ‘democratic’ pressure but because he was on the verge of exposing the corruption of the Lebanese elite, who are in fact just local agents for the Western elite.

Those who are politically aware in the West know that ‘freedom’ and ‘democracy’ are false slogans that cannot be fully practically implemented but they persist with these slogans because they know that governance requires something for the people to believe in and to strive for. They have manufactured a political religion just as the elites of the past manufactured polytheist beliefs, giving the masses false idols that they could believe in and worship, a designer religion whose prescripts served the control of the elite. Even after two centuries, the peoples of the West are still trying to implement ‘real democracy’. So why do Muslim countries persist with a system that fails even those who originally devised it?

Islam alone has brought the correct system of rule that concentrates all power for life in the hands of a single individual, the Khalifah (Caliph), thus making it virtually impossible for elite interests to gain any influence over him. The Khalifah is contracted to obey Shar’a alone and fully accountable in this before the Muslim Ummah, an impregnable combination as long as the Muslim Ummah take their political responsibilities seriously. The West has maliciously sought to portray Islamic rule as a type of theocratic dictatorship whereas the Khalifah is more firmly compelled by law and more vastly responsive to the people than their so-called democratic regimes that clumsily mask oligopolistic control. With Allah’s permission, the Muslim Ummah shall arise and abolish Western systems of government that perpetuate foreign disbelieving imperialist rule and re-establish in its place the righteous Islamic Khilafah (Caliphate) State on the method of the Prophet ﷺ that shall implement Islam, unify Muslim lands and carry the light of Islam to the entire world.

Allah (swt) says in the Noble Qur’an: يَا أَيُّهَا الَّذِينَ آمَنُواْ أَطِيعُواْ اللّهَ وَأَطِيعُواْ الرَّسُولَ وَأُوْلِي الأَمْرِ مِنكُمْ فَإِن تَنَازَعْتُمْ فِي شَيْءٍ فَرُدُّوهُ إِلَى اللّهِ وَالرَّسُولِ إِن كُنتُمْ تُؤْمِنُونَ بِاللّهِ وَالْيَوْمِ الآخِرِ ذَلِكَ خَيْرٌ وَأَحْسَنُ تَأْوِيلاً “O you who have believed, obey Allah and obey the Messenger and those in authority among you. And if you disagree over anything, refer it to Allah and the Messenger, if you should believe in Allah and the Last Day. That is the best [way] and best in result.” [an-Nisa: 59]