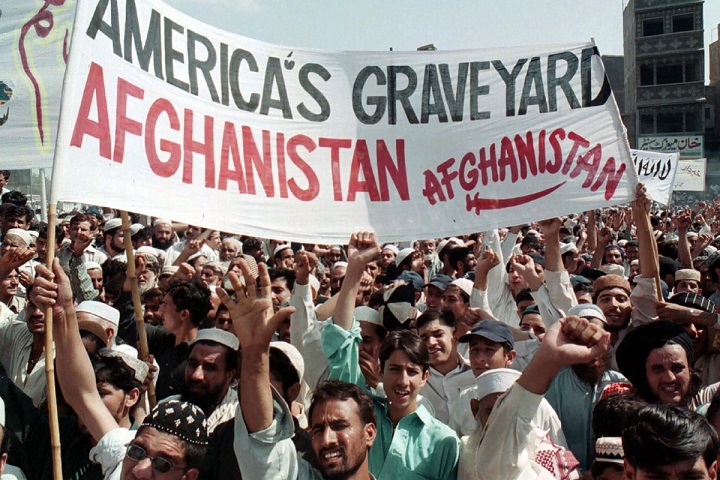 On 15th August 2021, the Taliban entered Kabul, after making spectacular gains over the rest of the country. The Taliban, designated as terrorists 20 years ago, were even requested by the US to protect its stranded personnel and troops in Kabul, in a drastic change of fortunes. The United States spent 20 years, $2 trillion, commanded at their peak 130,000 coalition troops, built up an Afghan security force of 300,000, and used the world’s most sophisticated and lethal air power. Still, it was unable to defeat an ill-equipped Taliban force of perhaps 75,000. The contrast could not be starker – the US forces, with their hi-tech arms, motivated by liberal democracy and the Taliban – simple weapons and motivated by Islam. The gravity of the defeat was characterized by the departure of the US forces from the infamous Bagram Airport, at 2am at night, without even informing their Afghan partners.

It brings in to sharp focus the contrasting decisions of General Musharraf, siding with the US in providing “unstinted support” in their operations – versus – the defiance of Mullah Omar (may Allah (swt) have mercy on him) and the Taliban, who adopted Jihad. The contrast is not about individuals, but about their thought process – one based on enlightened moderation and the other – the hukm of Allah (swt).

“O Prophet! Rouse the believers to fighting. If they be twenty of you who persevere they shall vanquish two hundred; and if there be of you a hundred, they shall vanquish a thousand of those who disbelieve, for they are a people who lack understanding” [TMQ Surah Al-Anfaal 8:65].

The hukm (command) embeds an essential quality for those who engage in fighting – patience and perseverance. This means that severe hardships will occur. There will be times when maintaining the effort will be a great drain on the physical and mental health of the Mujahid. Allah (swt) says in the Quran:

So, when Mullah Omar and the Taliban chose to abide by this hukm, they would have had no idea of when, where and how they would gain victory, or for that matter, if they would live to see it. But they knew that they had to be strong, patient and persevere. They knew that he who helps in the cause of Allah (swt), Allah (swt) will help them and strengthen them. Allah (swt) said,

“O you who believe! If you support Allah (swt), then Allah (swt) will support you and make your foothold firm” [TMQ Surah Muhammad 47:38].

This verse of Quran, like many others instruct us to abide the hukm of Allah (swt). It was this that the leadership of the army from the time of General Musharraf, and all the others that followed him, not only disregarded, but actually disobeyed. The “wisdom” of that violation is clear for all to see – the victory of those who abided by the law of Allah (swt), versus the shame of those who sided with the kuffar. Allah (swt) in the Quran states:

When one ponders on how after 20 years, the Taliban defeat of the US to power is predicated on many key decisions made by the US that led to the ultimate decision to withdraw. On the one hand, the corrupt Afghan governments that the US brought in were too busy siphoning off funds for themselves or their tribes, thereby alienating the population and driving the local population to provide support to the Taliban.  The US pivot to war in Iraq within 3 years of the Afghan war meant that political, military and economic resources were stretched between two countries, both demanding costly counter insurgency efforts. This, coupled with the 2008 financial crash, crippled the US economic machine, having a significant impact on the US Army capabilities. The Arab Spring uprisings from December 2010 into mid-2011 ultimately led to the Syrian uprising. Hence, by 2014, the US was facing an arc of instability from Afghanistan and Iraq, through to Syria and extending into Libya. By this time, the US was desperate to sue for peace with the Taliban, as evidenced by their meetings with the Taliban in Murree during the 2014/2015 period.

So as the US planned, so Allah (swt) planned, and Allah (swt) brought defeat upon the US, through their own policies. When the Taliban embarked on their Jihad, these events had not even occurred. They were even unaware of the strategic implications of these events. The Taliban could not have planned to wait until 2008 in expectation of the financial crash, nor the Arab Spring and the Syrian uprising resulting in erosion of US war capabilities. They were clear on one thing – the obligation of Jihad and remained patient and steadfast on this. But it was Allah (swt) who aligned these events, ultimately leading to the defeat of the US and their withdrawal from Afghanistan.

The parallels to this are clear during the Battle of Khandaq where the Muslims were under siege by a host of allies to defeat and destroy Muslims and Islam. The difficult situation warranted difficult decisions, and the Prophet (saw) suggested to the Ansar to pay the tribe of Ghatfan one third of the date harvest of Madinah. It was during these difficult times that Allah (swt) guided Nuaym ibn Masud to Islam. Nuaym (ra) was from the tribe of Ghatafan and well respected amongst the Jews as well as the Mushrikeen of Quraysh. Since no one knew of his acceptance of Islam, he plotted to create friction between the Jews of Bani Qurayza and the Quraysh led by Abu Sufyan. Nuaym ibn Masud (ra) was successful in causing disharmony among the confederates and splitting their ranks. While the mighty alliance was in this state of disarray, Allah (swt) sent down on the Quraish and their allies a fierce and bitterly cold wind which swept their tents and their vessels away, extinguished their fires, buffeted their faces and cast sand in their eyes. In this terrible state of confusion, the allies fled under cover of darkness.

In an article written by Dr. Carter Malkasian, who was Special Assistant for Strategy to the Chairman of the Joint Chiefs of Staff, General Joseph Dunford, from 2015 to 2019 very succinctly and precisely summarizes the essence of the reason for the defeat of the US. In an article [1], he states: “I have found no single answer to why we lost the war. While various explanations address different parts of the puzzle, the one I want to highlight here can perhaps be seen most clearly in the conversations I’ve had with the Taliban themselves, often in their native Pashto. “The Taliban fight for belief, for jannah (heaven) and ghazi (killing infidels). … The army and police fight for money,” a Taliban religious scholar from Kandahar told me in 2019. “The Taliban are willing to lose their head to fight. … How can the army and police compete?””

Thus, a non-Muslim US army veteran has concluded the essence of the strength of Muslims and Islam. The seeds of the success of the Taliban and the defeat of the US were laid the day the Taliban embarked on the Jihad for the sake of Allah (swt), because the success was in abiding by the Law of Allah (swt). Thus, on the fateful day that General Musharraf violated the Law of Allah (swt) and decided to provide unstinted support to the US was the day that he doomed Pakistan Army to shame. With all the firepower and nuclear weapons possessed by the Pakistani Army, the honor for defeating the US lay at the footsteps of the simple and committed Mujahid of the Taliban. May Allah (swt) guide us all to abide by His Hukm for His sake and purely for His pleasure – Ameen.