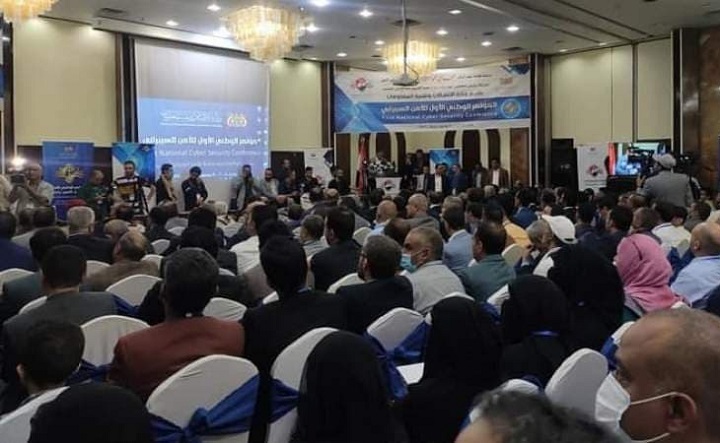 A cyber conference was held in Sana’a over a period of three days from 07-09/06/2021, attended by a member of the Supreme Political Council Muhammad Ali al-Houthi, Prime Minister of the Salvation Government Abdul Aziz bin Habtoor and Minister of Communications Misfer al-Numeer, and others, with great participation of the private sector.

The conference announced a number of goals, and concealed others. It announced its first fundamental goal, the necessity of developing a “strategy for cyber security in Yemen”, putting the financial cost to the private sector. As for the government side, it will have to develop the legislative and legal framework for the security of cyberspace through the issuance of laws and legislation, and make this come out with practical results that contribute to making a quality shift is in this vital field, and to hold this conference annually.

As for the undeclared goals that were covered up with many addresses, their aim is to violate privacy by spying on people by collecting data and information about their addresses and places of work, and their phone numbers “by automating the work of all ministries indicates the desire of security (forces) to obtain information and data in one window easily” under the pretext of the Communications Ministry’s pursuit to achieve the safe digital transformation of Yemen and the dissemination of digital services for people, including monitoring and eavesdropping on their calls through the Ministry of Communications, and cameras installed in the streets, to easily pursue them, as has been the case for many years in the repressive ruling regimes in Muslim countries, under the banner of keeping pace with everything new in the field of information revolution and technical and scientific developments, and combating information technology crimes, calling this the ability of Yemenis to create modern revolution in technologies and cybersecurity. Cybersecurity also aims to control access and block access to web sites, and direct the people of Yemen who fall under the authority of the Houthis through directing social media means of communication that have a significant impact in the service of their policies, and spying on people’s e-mail correspondence. The far and near knows the goals of this conference, as it did not come to serve the people, as it was claimed, but came to serve the international spying circles on the people of Yemen, and give them people’s data, which they would not have obtained without the Houthis providing them. The cyber conference acknowledged the continuing intensification of conflict between the major countries in this field, which makes Yemen fall under the mercy of one of these parties seeking protection, making its database exposed to the international body chosen to protect it.

Laws and legislation to take care of people’s affairs should be limited to Islamic thought and not capitalist thought, and it does not require spying on people. Allah (swt) says:

“Bani Israel were ruled by their Prophets. When one died, there would follow another. There will be no Prophet after me, only Khulafaa’.’ They asked Rasulallah, ‘What should we do?’ He said ‘Give them bay’ah, one after the other, and give them their rights, because Allah will ask them about responsibility.”
[Extracted by Muslim from Abu Huraira].

“Then there will be Khilafah on the method of Prophethood”.

Hizb ut Tahrir – the leader that never lies to its people – has pulled up its sleeves and working for the establishment of the second Khilafah Rashida (rightly guided Caliphate) on the method of Prophethood, so work with it O people of Iman and wisdom.