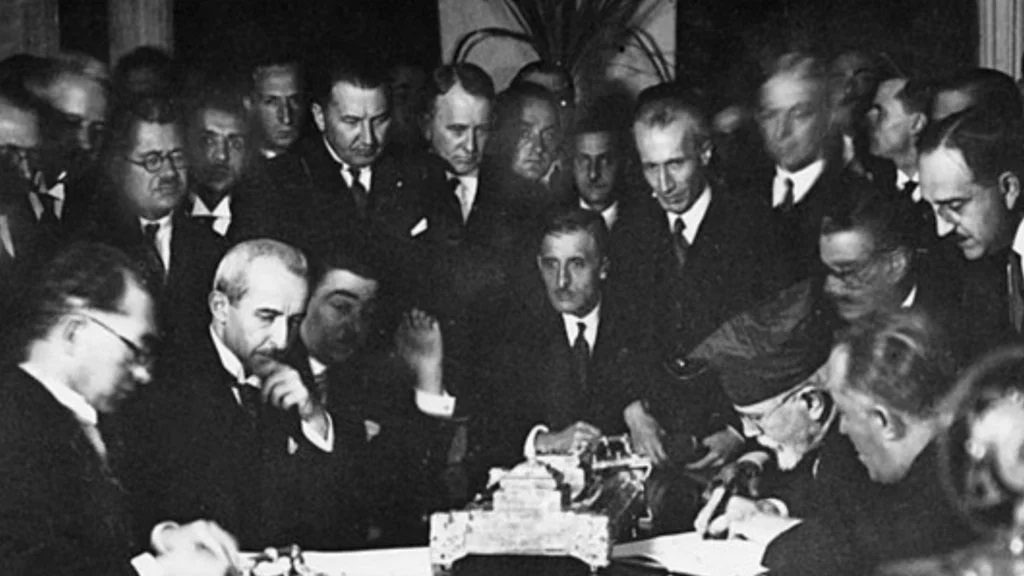 A century ago in the holy month of Rajab 28, 1342 AH corresponding to the 3rd March 1924, the Western Kuffar led by Britain succeeded in destroying the Khilafah (Caliphate) the mother of the obligations, the shield of the Ummah upon which is protected from the enemies of Allah. By destroying the Khilafah they had finally achieved what they were racing for centuries. It was narrated by the Abi Umamah al Bahili that the Messenger of Allah (saw) said:

“The knots of Islam will be undone one by one, each time a knot is undone the next one will be grasped, the first to be undone will be the Rule [of Islam; The Caliphate] and the last will be the Prayer (Salah).”

In the noble hadith, the Prophet (saw) tells us of a darkest and painful event of the destruction of the uppermost knot of Islam; a state that ruled the half of the world for more than 1300 years. The hadith also indicates the ruling (Khilafah) is the one that keeps the subsequent knots safe from being untied. This is since it is the ruler that is responsible to apply Islam in its entirety, to implement rulings of Allah (swt) and to protect the entire society.

Among dirty methods applied by the Kuffar to abolish Khilafah were the inciting the concepts of nationalism, chauvinism and separatism among the noble Ummah. European powers led by Britain, France and Russia thought how to abolish the Khilafatu Uthmaaniya by proceeding to implant the seeds of nationalism. This was spread all over the Muslims lands that were shaded by the banner of Islam and ruled by the Khaleefah but mainly focused into Arabs and Turks. This dangerous mission was executed through establishment of centres in Muslim cities such as Baghdad, Damascus, Beirut, Cairo and Jeddah. Two main centres were established to carry out this mission, Istanbul, to strike the state in its main centre, and Beirut, in order to strike its in the provinces, especially in the countries inhabited by Arabic speaking Muslims. One of the notable results of this conspiracy was seen in 1916 after the British spies (Jasassah) and T. Lawrence went to Makkah and recruit the Shariff Hussein the Ameer of the Hijaz appointed by the Khalifah in Istanbul. They told him: “We will liberate the land of the Hated Ottoman Turks and we will give you the independence and freedom and you will become the King of the Arabs.” Shariff Hussein then was rewarded for this betrayal of the Ummah 7 million Sterling Pounds! Hussein betrayed 1300 years of Ummah dignity and prosperity by declaring himself an independent from Khilafah and even joining the military alliance with his master Britain. Shariff had followed the footprints of Abdul Aziz Al-Saudi the Ameer of Najd who under the custodian of British Sir Percy Cox signed the Treaty of Darin on December 26,1915, which would go on to establish Kingdom of Saudi Arabia in 1932.

As for the Istanbul the capital of the Khilafah, it was used by the Western Kuffar to strike the Islamic State. They had undertaken several actions, the most important and the most devastating of which was the establishment of the Young Turks a political reform movement that favored the replacement of the Ottoman Khilafah with a secularist constitutional government. Mustafa Kemal Pasha led the Turkish War of Independence to form the Republic of Turkey as the successor state of the defunct Ottoman Khilafah. Then Atatürk carefully constructed and deployed a master plan, today known as the Kemalist ideology or Kemalism. Believing in this strategy Ataturk and his associates started to publicly question the value of Islam and held the view that was not compatible with modern science and secularism was imperative for modernity. In 1923 tyrant treaty known as Treaty of Lausanne was signed which Britain developed several unfair and painful conditions to the rights of the Khilafah Uthmaniya, such as the abolition of the caliphate, and the exile of the caliph and his family outside of Turkey, and the confiscation of all his assets and the declaration of a secular state. Mustafa Kamal backed by the Kuffar perpetrated a heinous crime by officially announcing the abolition of the Khilafah system and Turkey was declared a secular republic, and he forsook the rest of the Muslim countries that were part of the Khilafah. Indeed conspiring articles of treaty saw the 101st Khaleefah of Islam, Abdul Mejid II exiled from the now secular Republic of Turkey.

That’s how the colonialist destroyed Khilafah upon which the Ummah was put in misery and crises. Allah (swt) says:

Nationalism that was nurtured by the colonialists in the run up to the destruction of the Khilafah helped to establish cartoonist states that would remain at loggerheads, never to think of uniting Muslims. Any attempts to restore formidable unity with in the Muslims were replaced by impotent bodies such as Arab League and the Organization of Islamic Countries (OIC). These organizations were designed to perpetuate divisions within the sons of Muslims as they preserved the borders and barriers between Muslims that the colonialists had established in vicious scheme of Sykes-Picot.

The West understood the true essence of the Khilafah and so they worked with their utmost efforts to destroy it. Indeed they understood it as the only entity representing the unity of Muslims under the pious Khalifah. Consequently, they are working now to prevent its re-establishment as the call for it gains momentum day by day. Allah (swt) says:

“They wish to extinguish the light of Allah with their mouths, but Allah will not agree except that He will perfect His light, even if the disbelievers get annoyed.” [TMQ 9:32].

On the remembrance of the 100 anniversary of the abolishment of the Khilafah, it is upon us Muslims to redouble our efforts towards working for its re-establishment as it the only entity that will bind this Ummah into unity and tranquility.