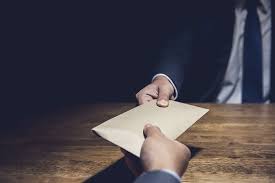 Comment:
It is not that just third world countries like Pakistan that have corrupt politicians even the established democracies offer humongous sites of corruption. The US is a lot more corrupt than Americans realize. Since 2016, of course, concern for corruption has been riveted on the sleaze show that is the Trump administration. As the New York Times revealed last fall in a remarkable investigative report, U.S. President Donald Trump’s life since boyhood has rested on assorted frauds, tax scams, and shady business dealings, and his recent conduct suggests high office did not alter the family’s modus operandi.

Since becoming president, Trump has breezily ignored the emoluments clause of the Constitution, handed taxpayers a multimillion-dollar bill for his frequent trips to his own properties, appointed his daughter and son-in-law to sensitive positions for which they are manifestly unqualified, and surrounded himself with a host of shady characters. Former campaign chairman Paul Manafort and several other campaign advisors have been convicted of fraud or other crimes. Former National Security Advisor Michael Flynn has been convicted of lying to the FBI, and Environmental Protection Agency Administrator Scott Pruitt and Interior Secretary Ryan Zinke both resigned over ethics violations. But the problem is in fact far more serious than Trump and his entourage. Consider some other recent scandals.

The 2008 Financial Crisis: A crisis that exposed systemic corruption inside key financial institutions. It wasn’t just a few crooked mortgage brokers offering lots of bad loans; it also involved serious abuses by ratings agencies, investment banks, government-backed lenders like Fannie Mae, and even some academic economists. In fact the people responsible for cratering the world economy were the cause behind that crisis.

The Boeing 737 Max: It seems clear that Boeing rushed the new plane to market, downplayed the need for additional pilot training, and used an increasingly cozy relationship with Federal Aviation Administration regulators to win approval for the plane. The world seems to have woken up to the conflicts of interest here: The United States was the last country to ground the plane after back to back plane crashes.

And let’s not forget that a number of venerated institutions in American life—including the military and the clergy—have been rocked by serious scandals over the past several decades. The U.S. military has been wrestling with a serious problem of sexual assault in the ranks, a wide-ranging procurement scandal that rocked the U.S. Navy, and the discovery in 2014 that 34 missile launch control officers conspired to falsify scores on proficiency exams. What these and other episodes remind us is that corruption isn’t confined to the previous or current White House administration, to a few bad apples like Bernie Madoff, or to a handful of industries with unsavory reputations (like real estate). On the contrary, it seems to be a growing problem in all walks of life.

The root cause of corruption is democracy, or man’s right to make laws. Panama Papers is perhaps the biggest proof of this. There can be no rule of law in democracy, because the law keeps on changing. The financial and business elites around the globe enter politics because they want to either make laws themselves or influence the process of legislation. Pakistan’s Prime Minister boasts of his business background, PTI’s central leadership constitutes of businessmen who are billionaires, David Cameron’s father had business interests, Russia and China’s presidents had business associates who were mentioned in the Panama leaks. These elites want low taxes, state subsidies, legal routes to transfer money abroad, government building infrastructure which suits their business interests. Can there be an easier way to make money if you get laws made which make you rich?

Islam gets rid of the problem of corruption by not just penalizing corrupt individuals but by taking the right to make laws out of the hands of human beings. In the Islamic Khilafah State (Caliphate), law derived from Quran and Sunnah is implemented which has detailed rules related to economic and financial transactions being done in a society. Thus no one can amass massive wealth by bending laws for laws are not allowed to be bent. Crisis can be a blessing but only if we invest in them properly. We need to address the root cause of corruption. Abolish Democracy, Establish Khilafah.