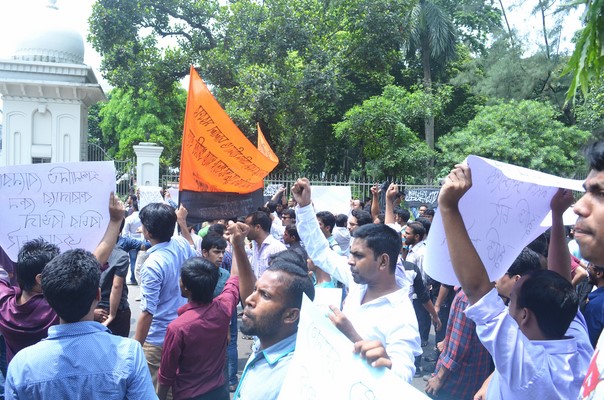 Today (Friday April 22, 2022) after Jumu’ah prayer, Hizb ut Tahrir / Wilayah Bangladesh organized protests in various mosque premises in Dhaka and Chittagong against the barbaric attack of the Jewish forces on Al-Aqsa Mosque and those who performing Salah and making ‘itikaaf there. The title of the protests was: “O Muslims! Establish Khilafah state to liberate Al-Aqsa”.

The speakers at the protest highlighted the brutality of the Jewish forces by saying:
the soldiers of the Jewish entity stormed Al-Masjid Al-Aqsa after the Salah of Fajr last Friday, 15th April. In violation of the sanctity of both the time of the Blessed Month of Ramadan and the place of sanctity of Islam and Muslims, Al-Aqsa, the cowardly troops abused and attacked those performing Salah, those making ‘itikaaf and the faithful guards. They inflicted dozens of injuries, arrested hundreds, smashed the windows of the Masjid, fractured the limbs of those performing Salah, assaulted the chaste women and trampled on the prayer mats with their boots.

The speakers highlighted the betrayal of the puppet rulers of the Muslim world by saying:
the incidents of attack on Al Masjid Al-Aqsa and the worshipers by the illegal Jewish entity are ever increasing as the slavish Muslim rulers are normalizing relationships with it. Through this, the treacherous rulers are giving the opportunity to intensify the hostility of the hated Jews against Al-Aqsa and the Muslims, so that they can secure their unholy position by tearing down this holy mosque. The puppet rulers of the United Arab Emirates, Bahrain, Sudan, and Morocco have already normalized relations with the Jewish entity, Turkish President Erdogan welcoming President of the illegal State of Israel, Isaac Herzog, in March. He described the “Israeli-Turkish” relationship as crucial for security and stability in the Middle East. The Hasina government of Bangladesh is also not far behind in this race, omitting the word ‘except Israel’ from Bangladeshi passports, and sending Muslim officers and soldiers of our military to join military exercises with the cowardly soldiers of the illegal Jewish entity is a clear example of this.

The speakers said regarding the required response to such heinous crimes against Islam and Muslims:
In this Blessed Month, the violation of the sanctity of Al-Aqsa – the first Qibla of Islam and Muslims and the place of Isra-Miraj of Rasulullah (saw), along with the beating of the chaste women, is more than enough to declare war and open all fronts against the enemy. In the rich history of the Islamic Ummah much less than this was enough to tear up treaties and mobilize armies. Was the Conquest of Makkah nothing but a response to the one who called upon the Messenger of Allah (saw), saying, “They fell upon us, killing us whilst we were bowing and in prostration”? Was the Conquest of Amorium, in Asia Minor, nothing but a response to the cry of a single woman, who cried out, “O Mu’atasim…?”

Finally, the speakers called for the establishment of the Islamic State Khilafah Rashidah, the only way to liberate Al-Aqsa:
O Muslims, how longer will you go on without establishing the Khilafah Rashidah (rightly-guided Caliphate) whose army, Allah willing, will uproot this illegal Jewish entity and those behind it, the Kufr Americans and British, as well as the rest of the Western Colonialist States and liberate Al-Aqsa; on a remarkable day that will be filled with loud takbeers of the Muslim armies? It is a true promise, mentioned by the truthful and trusted Rasulullah (saw):

“You will fight against the Jews and you will kill them until even a stone would say: Come here, Muslim, there is a Jew (hiding himself behind me) kill him.”