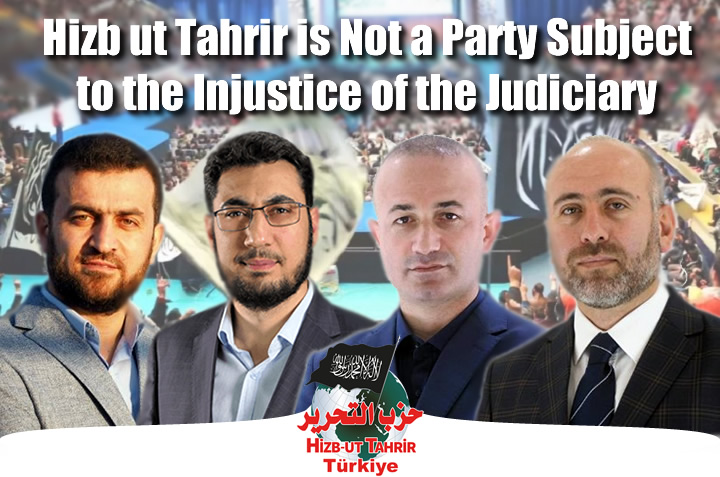 Because of the conference titled “Why Does the World Need the Khilafah (Caliphate)?” which we had planned to hold in Istanbul on 5/3/2017, but it did not take place due to the refusal of the local administration, Istanbul High Criminal Court No. 30 began to try the speakers at the conference; Mahmut Kar, Abdullah Imamoglu, Musa Bayoglu and Osman Yildiz. At the sentencing hearing held on 2/4/202, the four of them were sentenced to a total of 31 years and 3 months. This illegal ruling of the court was transferred to the appeal. On 17/5/2022, the Criminal Chamber of the Regional Court of Justice No. 2 in Istanbul rejected the appeal against the decision and upheld the unfair ruling.

The Constitutional Court is the highest judicial authority in Turkey, and if the decisions of infringement of rights issued by it are not implemented by the Courts of First Instance, the Court of Appeal and the Supreme Court, the obligatory and even the existence of the infringement decisions of the Constitutional Court should be questioned. In addition, the General Directorate of Security exceeded the job description and issued fabricated information memos to portray Hizb ut Tahrir as a “terrorist organization”. It sends the information it collected from social media to the courts without investigation and confirmation of its accuracy, and it attempts to influence the course of trials. Especially after the decisions of the Constitutional Court on the violation of human rights. The change in the information notes of the Public Security Directorate (PSD) reveals this fact. For this reason, the Courts of First Instance and the Supreme Court should treat information notes sent to them by the PSD with caution and not rely on such information notes without concrete evidence.

Hizb ut Tahrir is a political party whose ideology is Islam and works in the field of intellectual and political work. It has never resorted to the method of force and violence, and has not approved of this method, but rather criticizes and rejects and states that it is a wrong method. It made this explicit in its founding principles, publications and statements, and demonstrated it in its activities. Every sane person who reads the anti-terrorism law believes that in order for a group to be considered a terrorist organization, it must have resorted to means of coercion, violence, repression, intimidation and terrorism. You do not need to be a lawyer to understand this, a common sense suffices. Therefore, every fair person who knows Hizb ut Tahrir, even a little, refrains from linking it with terrorism. Those trying to align Hizb ut Tahrir with terrorism are people with malicious intent. However, their intentions and efforts will not be able to harm Hizb ut Tahrir. Hizb ut Tahrir is not a party subject to judicial injustice. Likewise, the brave members of Hizb ut Tahrir will not be subject to the malicious slanders of law enforcement officers or the injustice of judicial institutions.

“Those to whom hypocrites said, “Indeed, the people have gathered against you, so fear them.” But it [merely] increased them in faith, and they said, “Sufficient for us is Allah, and [He is] the Best Disposer of affairs” [Aal-i-Imran: 173]