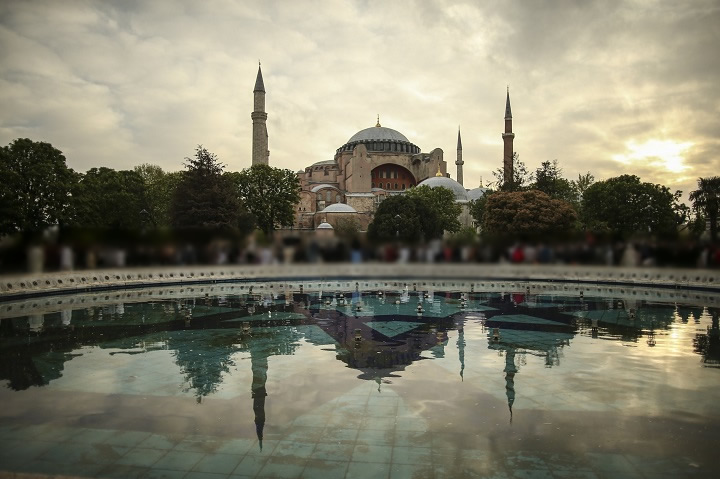 The 569th anniversary of the Conquest of Istanbul was celebrated with a feast of conquest held at Atatürk Airport National Garden.

For the feast, giant platforms were set up in Atatürk Airport National Garden that say “The 569TH Anniversary Celebrations of the Conquest of Istanbul” and “The first sapling planting ceremony in the National Garden”. Large Turkish flags and posters of Mustafa Kemal Ataturk and President Recep Tayyip Erdogan were hung at many points of the feast area. During the celebrations, President Erdogan and his wife Emine Erdogan planted the first sapling with the children accompanying them. (Anadolu Agency 29.05.2022)

Comment:In the history of the Ummahs, there are bright days that are the source of pride of these Ummahs. Undoubtedly, the conquest of Istanbul and turning it into Dar al-Islam, is one of the most important of the bright days in our history. What makes it important and privileged, is that the good news of the conquest was given by the Prophet Sallallahu Alayhi Wa Sallam and that the commander and the army have found favor with the Prophet.

Abdullah bin Bishr Al-Khath’ami reported from his father that he heard the Messenger of Allah (saw) say:

As a matter of fact, conquering Constantinople, which couldn’t be invaded despite many attempts throughout the history of Islam, was vouchsafed to Sultan Mehmet who was raised with this thought since childhood and in this way he got the title of “Conqueror”. Undoubtedly, Allah granted Fatih Sultan Mehmet and his army this grand conquest because of the fact that their hearts were filled with faith, they made the necessary preparations and remained faithful to Jihad.

The conquest of Istanbul is indeed one of the turning points in world history. Because, with this blessed conquest, the kuffar were subjected to a great disgrace and defeat, while the Muslims added honor to their honor. The truth shattered the brain of the falsehood through the hands of the Mujahideen, who fought in order to enjoy one of the two graces being conquest or martyrdom, and the 1500-year-old Roman empire came to an end. With this conquest, the integrity between Rumelia and Anatolian lands was ensured and the control of the Black Sea-Mediterranean Sea trade route passed to the Ottomans. In this way, the Ottoman State attained a legitimate reputation and dignity within the Muslim Ummah, in a way to make Istanbul the capital of the Caliphate.

But unfortunately, the conquest of Istanbul is celebrated today with secular activities that are never compatible with the “spirit of conquest”. Under the name of the so-called conquest celebration, concerts and entertainments are being organized. This year’s celebrations witnessed events where soullessness almost hit the top. The bright days of the Ummah were used in small political calculations by the AK party government, who has anxiety for losing the 2023 elections. Truth and falsehood were mixed together by praying for both Sultan Fatih and his army and Mustafa Kemal, and works that emptied the conquest were signed. The AK party government says that they have saved Ataturk from the Republican People’s Party’s abuse with this policy. However, in reality, by exploiting the feelings and thoughts of Muslims, it is doing what the Republican People’s Party cannot do and is diverting them from the truth.

Otherwise, how could planting trees at an airport be intermingled with a conquest that closed an era and opened an era? Furthermore, how could the poster of Mustafa Kemal, who turned Hagia Sophia – symbol of the conquest – into a museum while it was a mosque, be praised and waved during the conquest celebration?

Indeed, these events cause great anger and disappointment among Muslims who carry the spirit of conquest. In addition, this low attitude suggests that President Recep Tayyip Erdogan is calculating votes and interests rather than carrying an Islamic motivation when turning Hagia Sophia back into a mosque.

The paradoxical aspect of the matter is this: Jihad and conquest are directly Islamic concepts, but they are concepts rooted in the Ottoman Khilafah state. Because the Ottoman state became a world state by adopting these concepts as a principle. And the ideology of the Kemalist Republic that adopted the slogan “Peace at home, peace in the world”, is based on hostility towards Islam’s spirit of jihad and conquest. During the Izmir Economic Congress, Mustafa Kemal expressed this hostility by saying: “And our nation vagabonded behind such conqueror.” (Gazi M. Kemal Paşa İzmir Yollarında, İstihbarat Matbaası, Matbuat Müdüriyet-i Umûmiyesi Neşriyatı, Ankara 1339 (1923), page 108.). And when we remember that the same Mustafa Kemal abolished the Khilafah on March 3rd, 1924 with the aid of England and left the Muslim Ummah without shield, no words will be needed!