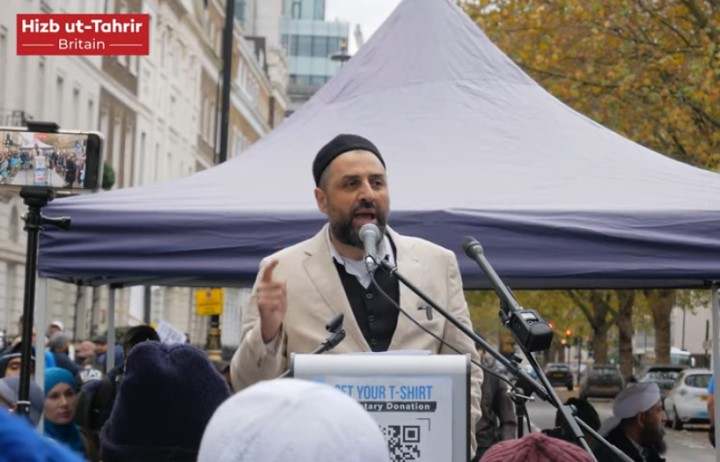 Muslims in Britain came out in large numbers at the Chinese Embassy in London, and the Chinese Consulate in Manchester, to demonstrate against the barbaric and inhuman treatment of their Uyghur brothers and sisters at the hands of the brutal Chinese regime.

Many of the atrocities perpetrated against the Muslims of East Turkistan were exposed in the speeches to the crowd.

Dr Abdul Wahid, chairman of the executive committee of Hizb ut Tahrir Britain, built upon this to offer hope and a true solution to end their suffering.

He reminded Muslims that we are all part of one global Ummah and that the Muslims here were giving their voices, their hearts and duas for their brothers and sisters in East Turkestan.

At the same time, he spoke of the abandonment of the Uyghur people by the neighbouring rulers of Muslim lands, who prioritised their own interests, instead of acting to rescue the oppressed from the oppressors – and that without a Khaleefah who rules with Islam there, where there is no shield for the Muslim Ummah.

The Prophet (saw) is reported to have said: «إِنَّمَا الْإِمَامُ جُنَّةٌ يُقَاتِلُ مِنْ وَرَائِهِ وَيُتَّقَى بِهِ» “Verily the Imam is a shield who is fought from behind and is protected by.”

He gave a message to the US, Zionist Occupiers in Palestine, and the Modi regime in India- all of whom shamelessly exploit the suffering of the Uyghurs for their own ends – as if we should forget their oppression of Muslims in the ‘War on Terror’, in Palestine and in Kashmir. He said that it is the same in principle, and they are only different in styles and degrees. He pointed out that the US funded opposition groups in Iraq and Syria to exploit their suffering – and the dangers for Muslims to be drawn into their agenda. Dr Abdul Wahid said, “We declare ourselves free of your agenda.”

His final message was for the Chinese Communist Party regime itself. He explained that when the traitorous rulers of Muslim lands are removed and the Khilafah (Caliphate) on the way of Prophethood has been re-established, then the Ummah under a righteous Ameer will remember all of this – and the Chinese should think then where will they buy Oil and Gas; and where will their Belt and Road go then?

In the end the call must be for Allah alone, to expose the oppressors and establish the power that will establish justice and prevent their oppression.

“And Allah has full power and control over His affairs; but most of the people do not know it!”[Yusuf 12:21]