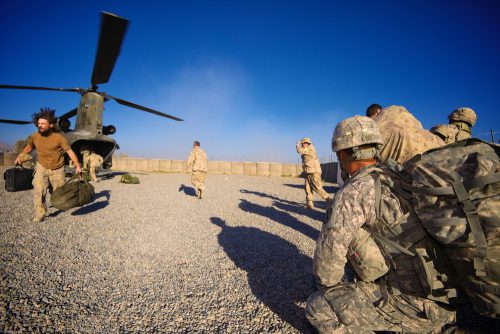 US President Donald Trump is demonstrating his political inexperience by making highly provocative statements without contextualisation or specificity, causing alarm not only in North Korea but in the entire region and the American homeland. Later (after a National Security meeting) Trump attempted to moderate his statements.

President Donald Trump again warned North Korea Friday about its threats against the United States, saying of that country’s leader Kim Jong Un, he “will not get away with what he’s doing.”

“If he utters one threat in the form of an overt threat — which, by the way, he has been uttering for years, and his family has been uttering for years — or if he does anything with respect to Guam or any place else that’s an American territory or an American ally, he will truly regret it, and he will regret it fast,” said Trump.
Speaking later on Friday, Trump reassured residents of the U.S. territory in the western Pacific. “I feel they will be very safe,” he said. “Believe me, they will be very safe. And if anything happens to Guam, there’s going to be big, big trouble in North Korea.”

Despite Trump’s amateurish, crude and thuggish approach, it is quite obvious that the US is indeed committed to intensifying the North Korean conflict. The reason for this is not North Korea but China. America is using the threat of war in North Korea to militarise directly on the Chinese border and also preoccupy China with an issue that will consume the time and effort of the Chinese leadership.

Achieving grand strategic objectives through political manoeuvring is the mark of a superpower. But it is astonishing to see the manner in which the Capitalist West chooses to do this, through provocation or acts of war that endanger the lives of millions. The Prophet (saw) demonstrated high political statecraft by employing political manoeuvring to achieve his (saw) aims, for example in the events leading up to the signing of the Treaty of Hudaibya with the Qur’aish. But the actions of the Prophet (saw) were designed to achieve results while avoid war and preventing bloodshed, which is why political manoeuvring is superior to war. In contrast, the West have demeaned both war and political manoeuvring by using fighting, destruction and loss of life for grand strategic objectives that are unconnected to the actual war being fought. America does not actually have a problem with North Korea, but is ready to engage in a war with that country, kill its people, destroy its infrastructure, only so that America can oppose the rise of China.

The callousness of the Capitalist secular liberal West is beyond words. But this attitude should be expected from a people that have adopted the critically flawed atheistic slogan of freedom, which in practice means that one should only selfishly care for oneself and bear no responsibility for the suffering of others.

Amid US Failure and Confusion, Senator John McCain Releases his Own Plan for Afghanistan

As the United States remains confused regarding how to reverse its continued losses in Afghanistan, John McCain, the head of the Senate Armed Forces Committee, has presented his own plan in the form of an amendment to the defence spending bill due to be passed by Congress later this year. According to the Dawn:

US Senator John McCain has unveiled his long-promised strategy for Afghanistan, which threatens “imposing graduated diplomatic, military, and economic costs on Pakistan” if it continues to provide the alleged support and sanctuary to terrorist and insurgent groups, including the Taliban and the Haqqani Network.

The strategy, issued on Thursday afternoon as an amendment to next fiscal year’s defence bill, includes providing additional US troops for counter-terrorism missions. It also allows US advisers to work closer to the front lines with Afghan officers and giving US commanders a broader authority to target Taliban insurgents, Islamic State militants and other militias.

Senator McCain, the chairman of the Senate Armed Services Committee, has long threatened to force a strategy on the administration if it doesn’t come up with one to win the 16-year-old war. Mr McCain said some of America’s “most experienced and respected former military and intelligence officials” contributed to this strategy.

Besides threatening Pakistan with new sanctions, the proposed policy also outlines the potential benefits of a long-term US-Pakistan strategic partnership that could result from Pakistan’s cessation of support for all terrorist and insurgent groups and constructive role in bringing about a peaceful resolution of the conflict in Afghanistan.

The political inexperience of US President Donald Trump has resulted in indecisiveness in many important matters, and Afghanistan is one of them. On the one hand, Trump is faced with the establishment position on matters, in this case America’s powerful military-industrial complex, who want to drastically increase military involvement in Afghanistan. On the other hand, Trump is influenced by the nationalist, ‘America first’ movement, with whose support Trump was elected, and who seek withdrawal of the American military and its replacement by mercenaries under the control of an all-powerful locally-stationed ‘Viceroy’ on the model of the British control of India.

However, the real cause of confusion for America is not its own internally clashing factions but the ascent of Muslims, which is resulting in the slipping of the West’s control over the Muslim world. Despite America’s rhetoric about Pakistan’s role, the reality is that Pakistan’s agent rulers now have little control over the Taliban leadership, and the Taliban leadership themselves have little control over regionally-located mujahideen throughout Afghanistan who are committed to evicting the disbelieving foreigner from Islamic land.

As the US intensifies the North Korea crisis putting pressure on China in its north-east, while conducting right-of-passage manoeuvres in the South China Sea, pressuring China to the south-east, Modi of India is placing pressure on China’s southern border at the standoff between the two countries’ troops at Doklam.

According to the India Times:

India continues to pump in additional troops and weapon systems on the entire eastern front in face of continuing belligerence from China on the Doklam standoff, even as diplomatic and military channels are being utilised in a bid to defuse the almost two-month-old crisis.

Sources said a top-level flag meeting between major-general rank officers from India and China was held at the Nathu La border personnel meeting (BPM) point in Sikkim for the first time on Friday, following failure of a similar meet between brigade commanders on August 8 to break the deadlock.

But the meeting also proved “inconclusive” with China remaining adamant that India should immediately withdraw its troops from the Bhutanese territory of Doklam near the Sikkim-Bhutan-Tibet tri-junction. “The Indian side held China should first remove its road construction equipment from the site. Both sides will now report back to their headquarters,” said a source.

The meeting between top military officers indicates a line of communication at the ground level and efforts to exchange perceptions and possibly explore means to contain the confrontation.

The Army has steadily but stealthily moved troops to their “operational alert areas” on the borders with China in Sikkim and Arunachal Pradesh, while also maintaining high operational readiness of its other formations and units all along the 4,057-km long Line of Actual Control stretching from Ladakh to Arunachal, as was reported by TOI earlier.

Now, when it is virtually publicly accepted that America’s interest in India is only to drive it against China, do the Hindu people not see that the West has only brought poverty and misery to India, while the 800 years of Islamic rule of India elevated this region to the economic and industrial powerhouse of the world? With Allah’s permission the world will soon see the re-emergence of the righteous Islamic Khilafah State (Caliphate) on the method of the Prophet (saw) and will witness a superpower that cares for all of humanity because it is sincere to its Deen and to the worship of Allah (swt) above all else.