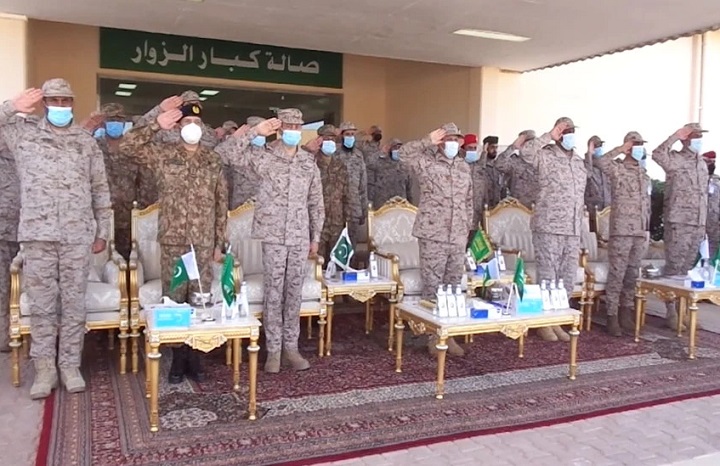 The Pak-Saudi military exercise “Al-Kassah-III” began on 14 December 2021, at the King Khalid Military City, Hafar Al-Batin, Saudi Arabia. According to Pakistan’s ISPR, these exercises are to enhance the cleansing and disposal of Improvised Explosive Devices (IEDs). Such IEDs are used by Muslims fighting against occupying forces in Kashmir and Palestine today, having been previously used against the US occupying forces in Afghanistan. Moreover, these exercises are not to dispose of the shackles that have prevented the Muslim forces from liberating the First Qibla and Occupied Kashmir. These shackles are none other than the agents of the kuffar that are currently ruling the Muslim World. Indeed, had the Pak-Saudi military maneuvers cleansed and disposed of the Jewish occupation of the First Qibla and the Hindu State occupation of Kashmir, there would have been a real cause for announcement, celebration and rejoicing.

The Blessed Land of Palestine and the first Qiblah of the Muslims, Al-Masjid Al-Aqsa, were occupied by Britain from December 1917, striking a dagger in the heart of the Ummah. In 1967, the Jewish occupation thrust the dagger in deeper, seizing Al-Quds and Al-Masjid Al-Aqsa. Yet, more than a hundred years since the kuffar occupation of Palestine began, none of the Muslim rulers have made any effort to liberate Palestine, eradicating the Jewish entity, which works actively to demolish the First Qiblah until now. Instead, the rulers of Muslims only shed crocodile tears, pleading economic and military weakness in front of the Ummah. However, Saudi Arabia is so oil-rich that through merely increasing or decreasing its oil production, it has a profound effect upon the world’s oil prices. As for Pakistan, its armed forces have nuclear weaponry and are the seventh largest in the world, whilst the power of Iman makes them supremely brave and capable on the battlefield.

Clearly, the current rulers of the Muslim World must be removed because of their open and covert support of the occupying Jews and Hindus. These rulers are negligent in protecting the lands, lives, property and honor of the Muslims, incapable of substantial responses to prevent repeated attacks on the honor of the Prophet (saw) and mobilizing the Muslim forces for the decisive liberation of the First Qiblah and Kashmir. Yet, these are the same rulers who were immediately ready to join the US in its so-called “War on Terror,” whilst in 2015, a military alliance of Islamic countries was formed under the leadership of Saudi Arabia to fight “terrorism,” headed by the former Pakistan Army Chief, General Raheel. Despite the formation of this alliance, to this day, Muslim rulers are deaf and blind to the terror of the Jewish entity in Palestine and the Hindu State in Occupied Kashmir. Indeed, the Muslim armed forces will only ever be mobilized under the Second Khilafah Rashidah (rightly guided Caliphate), because for the Rightly Guided Khaleefah, the implementation of the command of Allah (swt) is of greater value than the power and wealth of the whole world. And the command of Allah, the Exalted, is,

“And expel them from wherever they have expelled you.” [TMQ Surah Al-Baqarah 2:191] So, O Muslims! Demand that your fathers, brothers and sons in Pakistan’s armed forces grant Nussrah to Hizb ut Tahrir, for the immediate re-establishment of the Khilafah (Caliphate) on the Method of Prophethood.