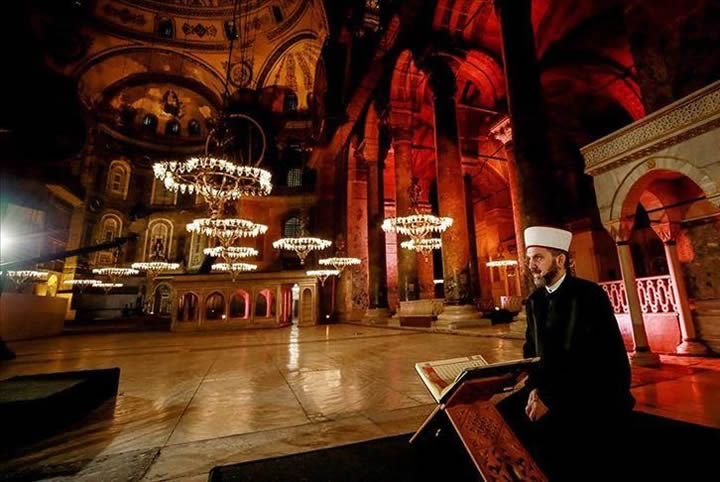 Today, 100 years have already passed since the collapse of the Islamic Khilafah (Caliphate), which throughout its existence carried the beacon of Islam to all humankind. I would like to mention two of the most difficult moments in the history of humankind.

One of them peaked in the time of the companions of the Prophet Muhammad (saw) and is associated with his death. Humanity turned out to be isolated, deprived of the opportunity to ask the Creator of heaven and earth. Humanity has lost the connection with the Creator, which was provided by our Prophet (saw).

The second point is connected with the collapse of the Khilafah (Caliphate) – the stronghold of the Muslim world and justice, the state that held back even the disbelievers during their sinful behavior on their own territory. We saw what grief befell the Islamic Ummah around the world.

Nevertheless, we know the secret of our success in this life. Allah Almighty said in the Quran:

“Allah has promised those of you who believe and do good that He will certainly make them successors in the land, as He did with those before them; and will surely establish for them their faith which He has chosen for them; and will indeed change their fear into security—˹provided that˺ they worship Me, associating nothing with Me. But whoever disbelieves after this ˹promise˺, it is they who will be the rebellious” [24:55].

The Almighty explained to the Muslims the reason for gaining power on earth. Also, the Messenger of Allah (saw) made us happy by his hadith. He revealed the future for us by the will of Allah and described the political situation of his Ummah in stages.

It is reported that one day Khuzaifa ibn Yaman (ra) was sitting with the others in a mosque, and among them was Bashir, who refrained from recounting hadith. Then Abu Salyaba al-Khushani came and asked Bashir ibn Saad to tell the hadith of the Messenger of Allah (saw) regarding the rulers. Khuzaifa replied that he remembers the preaching of the Prophet (saw). Then Salyaba sat down, and Khuzaifa began to retell the words of the Messenger of Allah (saw):

We saw from this hadith that everything that the Prophet (saw) promised has already been fulfilled, with the exception of the last one – the Khilafah according to the method of Prophethood. The same Khilafah awaits us, as it was in great companions’ days. And, verily, we have approached this time. So let everyone think about what he can get from this, what reward he expects from Allah because of participation or inaction in this matter. This case is settled. It will come true because it is the promise of Allah.

And many other texts, for the performance or abandonment of which we will be asked. That is The Almighty, having obliged us, demands from us what is within our power. These ayahs are already enough to please us with the great mission entrusted to us – to implement the law of Allah on earth. The only question is: “What will I do for this and what is my position?”.

And let people not think that they will not be touched by grief because of their inaction. We are responsible ourselves for the situation in which we live and we are responsible for the fact that we do not stop the blamed and do not call for the approved. Regardless of where we live, we see in what sins and vices humankind vegetates.
Narrated from Numan ibn Bashir, from the Prophet (saw), who said:

“Those who care about the inviolability of the borders of Allah and transgress these boundaries can be likened to people who drew lots on arrows to (take places) on the ship, as a result of which some were placed in the upper part (of the ship), and others in the lower. When those who found themselves below wanted to scoop up water, they (had to) pass through those who were located on the deck, and (in the end) they said: “Shouldn’t we make a hole (in the bottom) to draw water through it without disturbing those who are upstairs?” And if they (who are above) leave them to themselves and to what they want to do, then everyone will perish, but if they grab their hands, they will be saved themselves and will save everyone (the rest)”.

In conclusion, I would like to appeal to those who have not yet taken part in this great mission. Oh brother and sister! Begin the work to restore justice to the earth and join the group, those who are already doing it. And we know the result: